Can a resurgent, ugly antisemitism be reversed?

Antisemitism has been called -- with much justification -- the oldest hatred. A book to read about the history of this systemic bigotry is Anti-Judaism: The Western Tradition, by David Nirenberg. 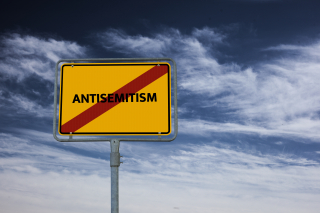 I tend to draw a distinction between antisemitism and anti-Judaism. I see the first as racial and ethnic in nature and the second as theological in nature. My essay on the long, long history of anti-Judaism in Christianity can be found here.

Still, this hatred, by whatever name or names, continues into this new year, as it has continued into every new year for thousands of years.

So to help all of us with understanding its nature and what to do about it, I want to share with you today this online page from the Institute of National Security Studies. It contains a collection of articles about various aspects of hatred of Jews.

One of those essays -- this one, in fact -- is by a man I've gotten to know in recent years, Alvin Rosenfeld, who teaches at Indiana University and directs the Institute for the Study of Contemporary Antisemitism there.

He points out, correctly, that until fairly recently antisemitism in the U.S. had dwindled to the point that many American Jews had little personal encounter with it.

Now, however, he writes, "Anti-Jewish animus. . .has become strident in recent years and shows no signs of diminishing. It is no wonder, then, that a new sense of unease is palpable in Jewish communities throughout the country."

In fact, when you think of how well Jewish citizens have become part of the American social fabric, this recent resurgence of antisemitism is especially disheartening. Rosenfeld writes:

"Most American Jews of the post-WWII generations are fully integrated in American life, regard America as their home, and have prospered here. Within the long history of the Jewish diaspora, in fact, America stands out as a country that, for the most part, has been open and encouraging to its Jewish citizens. Due to a resurgence of antisemitism that has moved from the fringes to mainstream areas of American life, however, Jews are confronting challenges that most have never faced before. Like European Jews, they feel far more vulnerable than they have in the past and can no longer take their safety for granted."

Some of this is simply that antisemitism never died in the U.S. But some of it no doubt due to the rise of white Christian nationalism that sees Jews as "the other," with no place in America.

You can read the rest of what Rosenfeld writes about this and you can sample several other of the pieces available at the link I gave you above in the fourth paragraph. May we all seek the roots of such public hatred of any groups of people and find ways to uproot it.

Perhaps you saw reports this week that the last living parent of any of the four Black girls murdered in a 1963 Birmingham, Ala., church bombing died. Maxine McNair, mother of 11-year-old Denise McNair, died Sunday at age 93. Sometimes I hear people asking why we Americans can't just move on when it comes to racial inequities and discrimination. Their implied message is that slavery, Jim Crow and the Civil Rights Movement are done and gone. Well, not exactly. When I think of racially related news events that have happened in my own lifetime, I'm sometimes overwhelmed by two things -- how much different things are today than when I was a child and how much still remains to be fixed. For example: From the time I was born, three and a half years passed before President Harry S Truman issued an order integrating the armed forces. Restrictive housing covenants were in effect across the nation for most of the first half of the 20th Century. I was three years old when the U.S. Supreme Court ruled them unenforceable but it wasn't until I was 23 that Congress outlawed them. (Which, of course, immediately resulted in integrated neighborhoods and equal housing access across the U.S. Not.) Those covenants were promoted by Kansas City developer J.C. Nichols, and it was only recently that his disgraced name came off the big fountain on the Country Club Plaza. The point is that we are far from solving racial divisions in our country. People who want us to quit talking about it and doing anything about it are mostly the ones who benefit from racial inequality.