Home Archives Profile
Do Christian ethics have a place in a post-Christian world?
Can a resurgent, ugly antisemitism be reversed?

I have a desk calendar that I replace each year. It comes from a company called At-a-Glance. For reasons I don't fully get, each day of the week has a separate page -- except for Saturdays and Sundays. They share a page, as they do this weekend and as you can see in this photo, taken before I crammed it full of appointments and reminders. 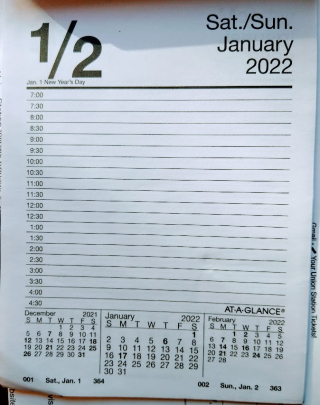 But it seems a little unfair.

The first days of a new year offer a good time to think about time itself and how we use it, how we abuse it, how we murder it or sanctify it.

In T.S. Eliot's remarkable poem "The Love Song of J. Alfred Prufrock," there is much rumination about time. Eliot, for instance, has Prufrock say this:

Yes, there is time, there is time. But, in the end, not much. Even for people who live what seems like a long time. My late father's brother, for instance, is scheduled to turn 100 years old at the end of March. I hope to be in Illinois then to celebrate that good and funny man.

But what is 100 years in a universe now believed to be 13.7 billion years old? Well, that information is believed by people who believe science. There still, of course, are biblical literalists who think Earth itself is only a few thousand years old. No wonder QAnon conspiracy theories and political Big Lies find easy audiences.

What 100 years amounts to, really, is a long lifetime of opportunities to help make the world more delicious for others, to help others see the beauty all around us, the gifts of nature that sustain us. Those are hard to see when we focus on individual freedom to the exclusion of the common good. But when our focus is on the well-being of others and of society as a whole -- as healthy religions teaches us it should be -- then we can discover that time is a gift to be used imaginatively, lovingly, prodigally.

One final thought about 2021: As the author of this RNS opinion piece correctly notes, in the just-ended year, "across the religious left, right and center, the dominant narratives suggested that as religion recedes as a force in American public life, it is becoming easier for political movements to co-opt faith for their own purposes. Perhaps this has long been so, but it’s astonishing to watch as the guardians of religious institutions — denominational leaders, prominent clergy and laypeople with oversight authority and responsibility — appear not only powerless to stop it, but often eager to go along." How else to explain the attraction people who call themselves conservative Christians continue to have for a disgraced man whose life has violated nearly all the values such Christians say they hold dear? Will faith leaders and followers do better in 2022? I hope so. But I'm taking no bets.