Home Archives Profile
Flynn's one-religion America: an unpatriotic idea that's DOA
How should we commemorate the anniversary of Jan. 6?

The warm Friday night the skywalks collapsed in the Hyatt Regency Hotel at Crown Center in Kansas City, July 17, 1981, I, as was then my habit on Friday evenings, played in a softball game with colleagues from The Kansas City Star. 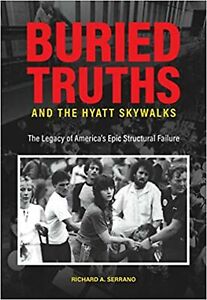 When the game ended, most of us stopped at a nearby bar to grab a beer and relive the game. Before long, however, we noticed some news breaking on a TV in a corner of the room. Once we figured out that something awful had happened at the hotel, our managing editor, who happened to be playing with us that evening, gathered folks around and gave out assignments.

Because I was a member of the editorial page -- not the news -- staff, that editor didn't have the authority to assign me to anything. But he did ask me if I would come to the office early the next morning and write the lead commentary piece for the Sunday newspaper. Which I did.

My piece on the front page of the Sunday Star began this way: "This decent, civilized city, pummeled by a disaster of unthinkable proportions, honored its dead even as it sought to find them -- honored them by its behavior." And it ended this way:

"Surely it is not too much to ask that our public architecture, construction and building maintenance be competent enough to avoid killing people willy-nilly. An honest, trustworthy people -- whose compassion, calm and caring nature shown brightly in this abominable mess -- surely can demand no less from its public officials. And unless I badly misread my outraged, grieving city, this demand -- unlike more than 100 of our family, friends and neighbors -- will not die."

Forty-plus years later, I've just relived all of that -- and more -- by reading my former Star colleague Rick Serrano's new book, Buried Truths and the Hyatt Skywalks: The Legacy of America's Epic Structural Failure. It's a terrific piece of work, detailed, carefully documented, sensitive and powerful.

What strikes me all these years later about that catastrophe -- in which 114 people died and 200 more were injured -- is that ethical questions are at the heart of the story. Such moral questions were at the core of the failure of those who designed and built the skywalks to make sure that what they were constructing was safe and not fatally flawed.

Time and again, people who should have noticed that the skywalks inevitably would come crashing down let things go by.

As Serrano describes what happened after the collapse, lots of people investigated the disaster. And each time it was clear that somehow those responsible for making sure that what they built didn't put people at risk didn't do their jobs. Their lapses -- their "complacency," as Serrano writes -- led to the catastrophe.

No matter what our jobs are -- whether professional or volunteer in nature -- our responsibility is to do them in a way that won't hurt others. Yes, we are human, meaning we will make errors. But errors that arise from complacency, from slovenliness, from inattention are, in the end, ethical errors, moral failures. Those errors no one can afford.

And Serrano's agonizing account of lives lost and lives changed forever makes that painfully clear. It's something all of need to remember. As David Gushee writes in his forthcoming book, Introducing Christian Ethics, "Morally responsible people consider the potential consequences of their choices." Because that didn't always happen in the Hyatt construction, the result was catastrophic.

Earlier this month I wrote here about the upcoming decision to split apart the United Methodist Church, primarily over LGBTQ+ issues. It now looks as if church leaders have agreed to schedule a twice-postponed meeting to accomplish that, as this RNS story reports, but they've left themselves plenty of room for another postponement. Covid has played a role in this, for sure, but church leaders seem unnecessarily skittish about doing what needs to be done.

P.S.: If you are looking for resources to understand Thanksgiving and the history behind it, my friend David Crumm, former religion writer for the Detroit Free Press and head of Front Edge Publishing, which published my latest book, Love, Loss and Endurance, has compiled this terrific list of exactly such resources. There's a lot there about how the holiday relates to Native Americans. I hope you'll give it a read.