Home Archives Profile
Forty years later, a hard lesson in ethical behavior
We can see through this glass not darkly but spectacularly

How should we commemorate the anniversary of Jan. 6?

A rabbi has an intriguing idea worth considering as we think about ways we could remember and commemorate the upcoming first anniversary of the Jan. 6 insurrection at our nation's Capitol. 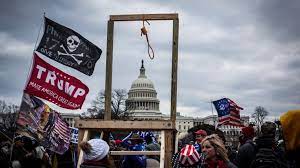 Rabbi Joshua Hammerman, writing for Religion News Service, proposes that Americans engage in a fast that day. He writes:

"Congress or the White House should echo the prophet Joel, who proclaimed:

Solemnize a fast,
Proclaim an assembly;
Gather the elders — all the inhabitants of the land —
In the House of the LORD your God,
And cry out to the LORD

". . .Ritual observances need to be established immediately, before purveyors of falsehoods seize the storyline, distorting what really happened. There is not a minute to spare."

As this New World Encyclopedia entry notes, "Fasting for religious and spiritual reasons has been a part of human custom since pre-history. . .Since fasting involves exercising control of the physical body, many religions consider fasting a way to cultivate mental discipline, and use it in connection with prayer or meditation to make it a more powerful experience."

I have almost never fasted. It's simply not been one of my spiritual disciplines, though I'm aware of Jewish and Muslim friends who participate in fasts according to their religious calendars. And, years ago, one of the senior pastors and an associate pastor at my congregation elected to fast during Lent, sticking to a liquid-only diet. But I'm not sure they exactly kept the rules. By the end of the season, I know, they were taking peanut butter and other solids and running them through a blender to make them as close to liquid as they could.

And I'm not sure they fooled anyone.

Still, fasting -- whether for religious or secular reasons -- is a time-honored way to focus the mind and the heart on something that needs attention or needs to be remembered. And, for sure, the brutal Jan. 6 insurrection, whose leaders bought Donald Trump's Big Lie that he won the 2020 presidential election, must be both remembered and understood. Despite considerable investigation into what happened, how and who was behind it, there still is much we don't know.

So as we wait for an accurate, full, clear history of what happened and why, we need to mark Jan. 6 each year in some appropriate way -- and then continue to do so annually so that we don't lose sight of how close America came to blowing up its democratic system.

Rabbi Hammerman notes that "there is no (American) fast day tied to a cataclysmic event; not for Pearl Harbor, 9/11 or the Civil War. Jan. 6 deserves one. As happened in ancient Jerusalem, America’s sacred precinct was desecrated, this time not by Romans bearing pigs, but by cretins bearing Confederate flags and feces. The Capitol was quickly washed and fixed up for the inauguration, but it was never ritually cleansed and rededicated like the ancient Temple in Jerusalem after some of its desecrations (that’s how Hanukkah came to be). And neither have we been cleansed of the stain inflicted upon our democracy. Our blemished Capitol and our sullied democracy still need that moment of cleansing and rededication."

Hammerman is not arguing for a religious ceremony but, rather, for a civil observance. If you have other ideas for how to commemorate Jan. 6, I'd like to hear them.

WE CAN BE READY FOR THIS

Another dangerous new variant of the Coronavirus seems to have spooked the world overnight. And, no doubt, we should follow closely this development to see how much we're all in increased danger. But let's not forget that we have learned a great deal about what to do -- and not do -- when faced with such a killer. We don't need to reinvent the pandemic wheel. Humans are resourceful and inventive, and are -- the Abrahamic faiths tell us -- made in the image of God. Let's be that now at our best.

P.S.: If you're interested in giving any of the books I've written as holiday gifts, they're all listed on my Amazon author's page here. I have a few autographed copies available, too. If you e-mail me at wtammeus@gmail.com I'll tell you how we can arrange to get you one (or more) of those.