A few weeks ago here on the blog, I wrote about the Nuremberg trials that were held right after World War II to hold some Nazi officials accountable for their crimes. 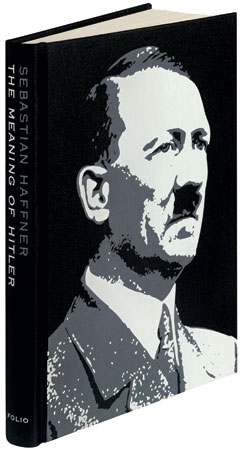 I have always sort of accepted the conventional wisdom that these trials were a good and necessary act, a way of getting Germany to acknowledge the horrific nature of the Holocaust.

Well, I still think the trials were necessary, but my thinking recently has been complicated by reading the Folio Society's brand new edition of a book first published in 1978, The Meaning of Hitler, by Sebastian Haffner.

No doubt there is some later scholarship than Haffner's that may challenge his ideas, but I'd like you to consider what he says:

". . .the Nuremberg 'war crimes trials' (were) an unfortunate performance which no one now likes to remember.

"The justice of the victors had many shortcomings: the principal defendant was absent, having removed himself from all earthly justice; the law underlying the trials was retrospective ad hoc law; worst of all, Hitler's real crime, the production-line mass extermination of Poles, Russians, Jews, gypsies and invalids was only a marginal charge, bracketed with compulsory labour and deportation as 'crimes against humanity,' while the principal charges were those of 'crimes against peace,' i.e. war as such, and 'war crimes,' defined as 'violations of the laws and usages of war.' . . .

"Hitler's real crimes, which. . .made the blood run cold in people's veins, now have to be laboriously picked out from among what we might call the normal dirt of war."

So Haffner's objections are that for the most part the Holocaust was not the central crime being prosecuted in the trials and that by declaring war itself a crime it has made criminals and liers of everyone who has prosecuted any war since -- a case of all emphasis being no emphasis.

The idea that the Nuremberg trials did not focus on the Holocaust as such may not have been original with Haffner and certainly has been repeated since then.

For instance, in Leni Yahil's important 1987 book, The Holocaust: The Fate of Euopean Jewry, she notes about the Nuremberg trials that "the crimes the Nazis perpetrated against the Jews were uncovered in these legal proceedings. . ." And yet she contends that the trials "gave both a public and a legal seal of approval to the civilized world's outrage at the crime of genocide." And that's clearly right.

It wasn't until the 1960s trial of Adolf Eichmann in Israel that Jews were able to lay out in a court in excruciating detail the mass murders of Jews that Hitler had ordered and conducted with the help of Eichmann and many others. Which is a primary reason that trial was so important.

For my review of the latest book on that trial, The Eichmann Trial, by Deborah Lipstadt, click here.

The important point here is that whatever focus the Nuremberg trials had, it's crucial to remember the crimes of Hitler and to understand as much as possible about how they happened. Otherwise our amnesia will doom us.

I don't know why we should be surprised when politicians exploit religion in untrue ways to gather votes. In fact, I'm not surprised that Rick Perry did just that. But it still angers me, as it also upset the careful author of this good piece about it. I just have trouble imagining how ignorant and gullible Perry must think we are about religion, prayer, Christmas and what's allowed in public schools.