There's no doubt that the late Rev. Dr. Martin Luther King Jr. now belongs to the world, to history and even, in some ways, to legend. 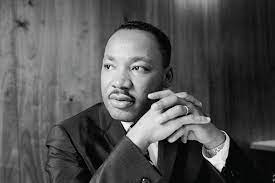 But this year for King Day, which is Monday, I want to describe a bit about King's history in Kansas City, which, in King's time, was (and in many ways still is) a profoundly segregated city.

Let's begin several years after King gained fame in the Montgomery, Ala., bus boycott in the mid-1950s, a direct action that he helped to lead and that was, in many ways, the opening of the modern Civil Rights Movement.

In 1961, King came to Kansas City to participate in the annual convention of the National Baptist Convention, USA, Inc., which then was the largest black Baptist denomination in the U.S. King and others were determined to oust the incumbent NBC president, J. H. Jackson, and elect, instead, Gardner C. Taylor. The primary issue had to do with differences over the direction of the Civil Rights Movement.

The result was a wild time on the convention floor and, eventually, the creation of a separate denomination, the Progressive National Baptist Convention (PNBC), which King joined and which became a primary foundation of the Civil Rights Movement. You can find the PNBC's description of its own history here.

What do I mean by "wild time" at the NBC convention? As this site notes, "In 1961, a near riot broke out at the NBC meeting in Kansas City, with Jackson supporters 'out-shouting, out-shoving the King forces supporting his civil rights platform.' The Jackson camp managed to secure the podium before the arrival of the police, but in the struggle for control, A. G. Wright of Detroit was knocked from the stage and killed.

"Despite this violent outcome, Jackson won a lopsided victory and remained as president of the NBC. Following the meeting, he denounced the nonviolent civil rights movement, including the Student Nonviolent Coordinating Committee and the Congress of Racial Equality. He also removed King from the vice-presidency of the Baptist Training Union and Sunday School Congress."

Any church convention in which someone gets knocked off the stage and dies is one for the ages.

In Taylor Branch's magnificent Pulitzer-Prize-winning trilogy on the Civil Rights Movement, he notes that "King's heart was with Taylor, and for the rest of his life he would mourn the failure to acquire this institutional base (the NBC) for the civil rights movement. . ."

And as for the physical struggle that broke out on the convention floor, Branch writes this: ". . .with as much surprise as possible, the Taylorites tucked Gardner Taylor into a 'flying wedge' of several hundred preachers and stormed through the entrance to the convention floor. . .as they headed for the podium in a thundering mass. King remained outside."

As for the person who died of head injuries, A. G. Wright, Branch has a detailed account of how he got injured and what it took to get him to the hospital.

And the Association of Religion Data Archives reports this about the event: "After a dangerous fistfight broke out at the denomination's annual convention in Kansas City in September 1961, King quietly withdrew from the NBC. That November, 33 ministers formed the Progressive National Baptist Convention (PNBC), which King, Abernathy and Taylor joined (and Taylor would later become President in 1967). The PNBC remained a stalwart of the civil rights movement and its members were well-represented in the Southern Christian Leadership Conference."

That may have been King's most dramatic appearance in Kansas City, but it wasn't his only one, as this Jackson County Historical Society account describes.

The author of that article, Brian Burnes, my former Kansas City Star colleague, reports that between 1957 and his death in 1968, King made at least six visits to KC.

There's an old saying in the journalism business that all news is local news. Like most famous sayings, it's too broad and too simplistic, but it does remind us that some national and international stories have local connections about which we should know.

If you are reading this on Facebook and have a story to tell about King in Kansas City, I invite you to leave a comment. As for me, I never met King, though I did once meet his father, Martin Luther King Sr., known to many as Daddy King. That was when I was a newspaper reporter in Rochester, N.Y., in the late 1960s. But the story of either King in Rochester is best left for someone else to tell.

(P.S.: As many of you know, King learned a lot about nonviolence from Mahatma Gandhi in India. My friend Markandey Katju, a retired India Supreme Court justice, has written this commentary about where India is now in its relations with Pakistan and how majority Hindus in India get along with minority Muslims there. Katju is issuing a plea, in harmony with both Gandhi and King, to end religious hatred.)

Since the start of the Covid pandemic, every house of worship has had to adjust and decide whether, where and how to hold worship services. This opinion piece makes an interesting argument, from a Christian perspective, that faith communities should stop streaming their worship services live now. Rather, the author argues, they should do video recordings of the service and email a link to those recordings to anyone who could not be physically present. I think the idea has some merit. What do you think?