Home Archives Profile
How 'Pharisees' came to stand for all Jewish people
Is humanity 'totally depraved' or is there some hope for us?

Does the Museum of the Bible help or hinder scriptural understanding? 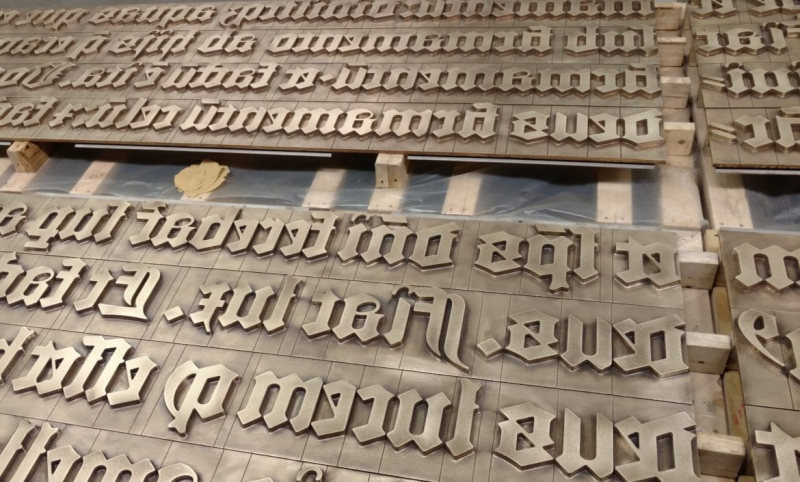 Several months before the Museum of the Bible opened in 2017 in Washington, D.C., I wrote this Flatland column describing how Kansas City metal craft workers were creating the stunning front doors through which visitors would enter.

As I described it then (the photo above shows it), the "40-foot-tall bronze doors — a replica of the bed of Johannes Gutenberg’s press from which he printed the first mass-produced Bible in the world in the 1450s — are being milled and brought to life by skilled artisans at the A. Zahner Company near Ninth Street and The Paseo."

Five years later, that museum has traveled a difficult road with various kinds of troubles. In March of 2020, I wrote this blog post about some of those difficulties that have -- or should have -- embarrassed the museum's private owners.

Now comes a new book in which two scholars, Jill Hicks-Keeton, a professor at the University of Oklahoma, and Cavan Concannon, a professor at the University of Southern California, call into question the foundational motives for building the museum in the first place. As this RNS story reports, Hicks-Keeton and Concannon examine "the museum’s exhibits, theatrical experiences, publications, funding and partnerships. The book, Does Scripture Speak for Itself?: The Museum of the Bible and the Politics of Interpretation, argues that the museum is part of a larger 100-year-old project of white evangelical institution-building."

In other words, the authors conclude that the new museum isn't presenting a historically fair and unbiased view of the Bible and its history but is, rather, trying to "bolster a white evangelical identity by producing a Bible that is benevolent, reliable and divinely inspired; a Bible that resists critique and has universal appeal."

The authors contend that the museum's wealthy founders "have not just created a museum, but a kind of parachurch organization intended to hold up the Bible as central to American public life." The RNS story about this, which includes an interview with the authors, adds this:

"In a statement responding to questions from RNS, the museum said it disagreed with the book’s premise and claims. 'We recognize that the Bible’s story is global and that its impact on different communities is historically varied and complex. As such, the museum strives to ensure our exhibitions are accurate and have historical nuance, which has been consistently confirmed by positive visitor feedback.'”

The interview with the authors includes this section:

You point out that the museum presents a white evangelical Bible. Why is the racial component important?

CONCANNON: Not all evangelicals are white. We’re talking about a sect shaped by whiteness. It’s less a demographic descriptor and more as a description of the institutional makeup. It’s a culture of whiteness. Some people in that orbit are not demographically white.

Well, I haven't yet read the book so I'm in no position to draw conclusions about whether it's fair.

But I do think it's fair to recognize that different branches of both Christianity and Judaism have different ways of reading the Bible -- ranging from considering it the literal, inerrant word of God to a collection of spiritual-based stories -- including a lot that can't be taken as historical -- that can be helpful in figuring out how we're meant to live today. Beyond that, some people unattached to any faith consider the Bible and other sacred writings to be little more than fairy tales.

To take our religious traditions seriously, we must have a grasp of how to understand and interpret sacred scripture. That's true for any institutional religion. But in my experience there is so much biblical illiteracy among both Christians and Jews that there's a lot of misunderstanding about how to read and interpret the Bible as well as a lack of knowledge about who wrote it, when and for what purpose.

So my guess is that a lot of people visiting the Museum of the Bible don't have the tools to evaluate whether it's of true museum quality and reliable or whether it's simply another product of white evangelicalism, such as many Christian radio and TV broadcasts.

In the end, the important point is that to understand any tradition's scripture, you need to know something about when it was written, to whom, in what language, for what purpose -- to say nothing of the editing, translation and transmission process that has brought it to the volume in your hands. Sadly, there seem to be fewer people in the pews willing to devote the time to take the Bible seriously. And taking it seriously means not taking it literally (though there are passages that contain actual history).

A Bible museum should add to this process. I'm still not sure the Museum of the Bible does much -- or at least enough -- of that. But I've promised myself that the next time I'm in Washington I will experience it for myself.

ANOTHER PROBLEM WITH STATE-APPROVED RELIGIONS

No doubt because I grew up in the United States (except for two years in India), I've always been skeptical of countries that have an established religion, meaning one that has a government stamp-of-approval. Such as the Church of England. That very church's establishment credentials are being called into question increasingly with the news that now fewer than half the citizens of the United Kingdom identify as Christian, as this opinion piece from The Guardian reports. The author of the articles persuasively argues this: "The case for dismantling the Church of England’s relationship with the state is now overwhelming. The church cannot retain the monarch as its governor 'by the grace of God'. It should retire from its prominence in state and civic ceremonies, remembrance days, judicial oaths, the BBC and the daily service. The church cannot justify its privileged access to state schools and its reserved seats in parliament, the latter perk shared only with Tory party donors."

P.S.: If you want to give my latest book as a holiday gift, I still have a few autographed copies of Love, Loss and Endurance: A 9/11 Story of Resilience and Hope in an Age of Anxiety, both in paperback and hardback. Email me at wtammeus@gmail.com and I'll tell you how to get one.