Home Archives Profile
Is humanity 'totally depraved' or is there some hope for us?
How can we tell solid religious beliefs from superstition?

Even scientists find that religion has many benefits

For decades now, various scholars and scientists have been researching the interesting question of whether you'll live a healthier and longer life if you are in some way a person of faith. 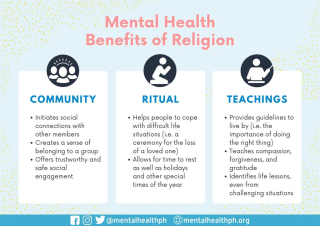 And as this story from The Guardian notes, the answer seems to be a resounding yes.

"Joining a church, synagogue or temple even appears to extend your lifespan," it reports. But it adds this caution about such a conclusion: "These findings might appear to be proof of divine intervention, but few of the scientists examining these effects are making claims for miracles. Instead, they are interested in understanding the ways that it improves people’s capacity to deal with life’s stresses."

The author of the article, David Robson, also adds this: "Ultimately, most people’s faith will arise from real convictions; it seems unlikely that many people would adopt a particular religious view solely for the health benefits. But even if you are agnostic, like me, or atheist, this research might inform your lifestyle."

He makes various suggestions for how to use faith-based ideas and practices, such as forgiveness and gratitude, to better your life, even if you never join an institutional religion or show up at a worship service.

Having gone through tough times because of the Covid-19 pandemic, many houses of worship are experiencing financial difficulties. So here's an idea for people in religious congregations: Figure out how to charge people for all the religious practices and ideas that non-religious people can use to stay healthy and live longer lives. After all, people of faith pay for those practices and ideas through their pledges, offerings or dues. Why not make outsiders pay for using our ideas?

Do I have to say now that I'm just kidding? That it would be unworkable? That no one outside a congregation would ever be dopey enough to pay a dime?

I hope not. I trust you readers to know when I'm kidding and when I'm not.

Besides, if you have read The Guardian piece to which I linked you above, you know that I have just given you good advice for free. Which is? People who pray for others instead of just themselves often live longer. So I now free you to pray for me and to quit worrying about yourself so much. Maybe by doing that you'll live long enough to come to my eventual funeral. And maybe once inside the building that houses my church, you'll discover other reasons to show up there. All of which might turn you into a person of faith with access to all the better- and longer-life benefits scientists are discovering in religious people.

(The illustration above came from here.)

WARNING: THE END IS NEAR -- OR, WELL, SOMEWHERE

Back in the mid-1980s, the late Christian ethicist Katie Geneva Cannon came up with the term and concept of "womanist theology." The idea, simplified, was that when Christians do theology as a way of understanding life and its purposes, they should no longer neglect a group of long-neglected people: Black women. Cannon was among many women of color who recognized that the theological task in our age was being short-circuited and distorted because it was primarily a discipline led by white men. That's certainly not to say that white men got everything wrong in their theological explanations. Rather, it was to say that they didn't represent everyone and, thus, missed out on the concerns and insights Black women could offer.

This new volume of essays seeks to explore where the world of Christian theology, especially Christian ethics, has come since Cannon sounded her important wake-up call. As the editors say in their foreword, Cannon's "founding of Black Womanist Theology built a new mountain on the old landscape of Christian ethics." As one of the essayists, Renita J. Weems, writes in the book, "To be a Black female intellectual in this country means, for one thing, to think, write and teach under a cloud of suspicion that says you're not good enough, not serious enough, not smart enough." Womanist theology intends to try to fix that.

Kansas City area readers may be particularly interested in the essay by Angela D. Sims, who taught for several years at St. Paul School of Theology here and who today is president of Colgate Rochester Crozer Divinity School in Rochester, N.Y.  In it, she explains that "to form students in theological and multireligious studies to serve, care and advocate for all peoples and the earth is a core tenet of womanism." Sims also describes her own intriguing story of how she ended up leading a major seminary (one where I used to take lay theology courses when I worked as a reporter in Rochester in the late 1960s).

In some ways, this is a book for people inside the academy and, thus, its language often reflects what anyone who has read academic essays has come to expect -- inside-baseball talk that many people watching the game from their stadium seats won't get. But it's an important book because it picks up the useful work Cannon began and it bears the promise that this work will and must continue.