Home Archives Profile
Can some good come out of the trend toward secularization?
You can help a Catholic Worker house continue its ministry

The benefits of doubt get another boost

Several years ago, I wrote a book called The Value of Doubt: Why Unanswered Questions, Not Unquestioned Answers, Build Faith. 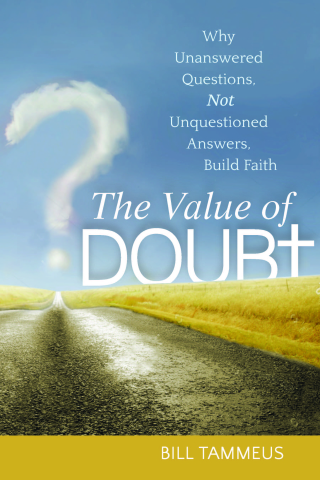 The idea is not that we never come to at least some provisional conclusions about eternal matters but that we hold our conclusions with the understanding that we may have to adjust them when we learn more or have better revelations.

If this sounds like something that would come only from someone from a faith tradition that might be called progressive or liberal, well, today I'd like to disabuse you of that notion.

Here is a Religion News Service column by a pastor of an evangelical Christian church in Texas. In it, he writes this: "Doubt often gets a bad reputation, especially within Christian settings, but doubt can be hugely productive. It can paralyze us, yes, but it can also propel us to seek truth. Nearly every person of faith (including me) has experienced a season of doubt, a process that often takes one deeper into an exploration of God. Theologian Paul Tillich wrote, 'Doubt is not the opposite of faith; it is an element of faith.'”

Unless you are in a faith community that allows you to ask the hard questions of religion, it's doubtful that you'll ever develop a sustaining faith. Perhaps the hardest question is about why there's evil and suffering in the world if God is both all good and all powerful. Theologians refer to it as the question of theodicy, and, truth be told, no one has ever come up with an answer that is completely satisfying to everyone.

But if you aren't free even to ask such questions in your congregation, your spiritual growth will be stunted.

The author of the RNS column, the Rev. Bruce B. Miller, adds this: "We must not suppress doubt but unfold it. The process of questioning and exploring faith has the power to open minds, give rise to new ideas, reveal new horizons and change our lives. Even as an evangelical Christian pastor, I know that times of deep doubt and intense questioning have helped me to grow, intellectually and spiritually."

So ask your hard questions. And if you're in a congregation that doesn't want to hear such questioning, find one that does.

In the end, there will be fewer people dead certain about things that defy such certainty. And that will be a good thing.

ARE YOU PICTURED HERE?

A little something different for a second item today: This collection from The Guardian of terrific photos and a few words from someone who says that "street photography is my religion." Enjoy the moving and strange photos of some of God's children.

P.S.: The slowly splitting-up United Methodist Church finally, after several delays, has set a 2024 date on which to vote on a schism plan. Covid and Covid-related delays have prevented this vote for several years, though as the RNS story to which I've linked you notes, "In the meantime, the denomination — one of the largest in the United States — has begun to splinter, with some churches choosing to leave the United Methodist Church for the (more conservative) Global Methodist Church or to become independent." It's been a sad story, and it's time for folks to choose sides and move on.

ANOTHER P.S.: There are two events and/or offerings coming up at the Jewish Community Center that may interest many of you. First, the "Jewish Nutcrackers" will be performed Dec. 4 and 11 at the White Theatre. Details here. Next, the Jewish Chaplaincy program, under the auspices of Jewish Family Services, is offering a pre-Hanukkah Service of Spiritual Renewal at 2 p.m. on Sunday, Dec. 4, in the Social Hall of Village Shalom, 5500 W. 123rd St., in Overland Park. Details here.