Home Archives Profile
Do non-religious Americans have a political future?
Must some of our laws remain morally reprehensible?

Religious reasons to be against state-sponsored gambling

The recent decision by Kansas to legalize betting on sports once again raises the question of what various faith traditions teach about gambling. (The photo here today of Gov. Laura Kelly of Kansas placing the first legal sports bet was shot by Rich Sugg of The Kansas City Star. I'm sorry she's promoting this foolish idea.) 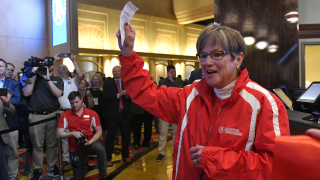 Mostly religions are against gambling. And for lots of good reasons.

I'm against it, too. And for many of those same reasons. In fact, when Missouri created its state lottery system years ago, I bought two tickets to show my young daughters why state-sponsored gambling is simply another way to throw away your money. I, uh, gambled that they wouldn't find a winner when they rubbed off the covering on the numbers found on the tickets.

I won that bet. And I think they learned the lesson I was trying to teach them.

But let's look at what the world's great religions think and teach about gambling. The article to which I've just linked you is from gamblingsites.org and does a pretty fair (though sort of pro-gambling) job of outlining the teachings about gambling from various religions. Perhaps the most strident opposition comes from Islam. As the article notes, "Islam features two types of deeds, including the haram (sinful) and halal (lawful). Gambling is seen as haram and requires severe punishment under Islamic law."

Why would faith traditions be against gambling? Here are some reasons from that article and some others I've looked at recently:

These and other issues make state-sponsored gambling deeply problematic. State policies and laws, of course, should not be determined simply by voters' religious views on this or that subject. But when the major world religions raise serious questions about the morality of gambling, the followers of those religions would do well not to engage in it, even if it's legal. There is, after all, a serious difference between being legal and being moral. If we didn't learn that from slavery and other legal abominations, what did we learn?

THE DIMINISHMENT OF AMERICAN CHRISTIANITY CONTINUES

As America's religious landscape continues to change, Protestant Christians already have fallen to the point that they now make up less than half of the U.S. population. A new study projects that by 2070, Christians as a whole will make up less than half the population of this nation. There are several possible responses from Christians: Work harder to invite more people into the faith; sit around and do nothing; moan the loss and try to bring back the past ("Make America Christian Again"?); welcome the diversity and seek to live in peace with all. I'd choose the first and last of those.