Home Archives Profile
This is still a good question: How can we keep from singing?
Do non-religious Americans have a political future?

Christianity's history, like that of all faiths, is a wildly mixed bag

Voltaire, who may have started the practice of celebrities being known by just one name (well, unless it was God who did that), once wrote this: "The history of the great events of this world is hardly more than the history of crimes." 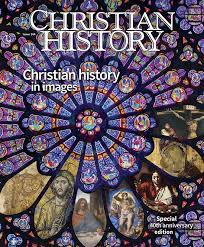 Truth be told, Voltaire was a pen name for François-Marie d’Arouet (1694–1778), but he was on to something in his remark about history -- something, but not everything.

History, in fact, is more than simply the story of great crimes, wars, disasters, storms, catastrophes, accidents and heartaches. If you don't also include the inspiring instances of generosity, love, kindness, beauty and shared progress, you get a pretty dark picture of humanity. It's a picture that, in many ways, humanity deserves. But it's not the full picture.

I have been thinking about all this since I recently received my latest issue of Christian History Magazine, which this time offers a cover story called "Christian History in Images." Inside the magazine there is a foldout listing various important events in Christian history that are, at least in passing, mentioned in this edition.

It's a pretty sobering list, and it made me think immediately of the story in Genesis that indicates that one of the sons of the First Couple, Adam and Eve, murdered his brother. Nice start. No wonder then that eventually we get the story of how God threw in the towel and flooded the Earth, destroying all humanity except Noah and his family.

At any rate, the third listing in the magazine's list of historical events happened in the year 65: "Peter is executed." That would be the guy the Catholic Church today calls its first pope, St. Peter. After that, we get two people martyred in 203, persecution of Christians across the Roman Empire starting in 250, persecution of the church by Diocletian in 299 and the launching of persecution of the Christians in Persia in 340.

And we're still more than 700 years from Pope Urban II launching the First Crusade, designed to recover the Holy Land from Islamic rule but that also involved lots of Christians persecuting others. In fact, the Crusades (there were several) led to blood and death and pain and horror all along the way. Many Christians may not know this story but Muslims and Jews, many of whose ancestors were slaughtered, still remember. (If you haven't done so, I recommend reading Steven Runciman's classic three-volume history of the Crusades. Read it and weep.)

There is much more disturbing in Christian history, including the way it preached a deadly anti-Judaism for centuries.

But there is good stuff in this Christian History list, too. In 405, for instance, Jerome finishes translating the Bible into a Latin version known as the Vulgate, thus making scripture much more widely available. In 540, a monk named Benedict writes his monastic rule, which to this day guides men and women, including my Benedictine-oblate wife, in how to live peacefully in community. In the 1200s, Thomas Aquinas writes works that will influence the church for centuries. In the 1300s, the amazing Julian of Norwich shares her divine visions with others.

In 1517 the Protestant Reformation begins, which can be counted among the good stuff by Protestants and among the disasters by Catholic and Orthodox Christians.

And on and on. You could look it all up.

The point is that in this imperfect world (remember that in the book of Genesis, when God completed the initial creation on the sixth day, God declared it "good" and even "very good," but not "perfect"), Christianity in particular (but religion in general) has added unimaginable beauty and luster to the world but also crime and disaster. We're foolish if we don't acknowledge both realities and then pledge to work to make sure that what follows is much, much more good than it is catastrophic, no matter which religion, if any, we follow.

(P.S.: Speaking of Christian history, did you know that the racist Ku Klux Klan organization considered -- and considers -- itself Christian in origin and spirit? Did you also know that there's a plaque honoring the KKK still today affixed to the entrance of the United States Military Academy's science center at West Point? This NBC story has the appalling details.)

A GOOD WAY TO RESPOND TO SEXUAL ABUSE SCANDALS

It's reassuring to find Southern Baptists directly tackling the issue of sexual abuse within their churches and ecclesiastical structures. In fact, wouldn't it be a good idea if all faith communities that have struggled with this worked together to find common solutions and approaches? By now, for instance, the Catholic Church has gained experience in working on a sex abuse scandal in ways that might benefit the Baptists. Similarly, schools -- both public and private -- that have had to respond to instances or patterns of sexual abuse involving students could and should learn from each other. At any rate, the Baptists would do well to continue being open to media coverage as they seek generative responses to a long history of sexual abuse that was ignored.