Home Archives Profile
What does religious history teach us about monarchies?
A short break from the blog for a wedding

What's religion have to do with marrying and having kids?

If someone commits to a particular religion, presumably that person will pay some attention to that tradition's teachings as he or she makes important life decisions. 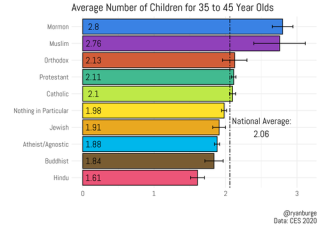 For instance, what does the religion teach about the value of marriage and family? Should the faith influence whether to have children?

Well, it turns out that religious affiliation, if any, does tend to influence whether to marry and whether to have children and how many to have, as this Religion News Service story reports. It says: "In 1972, about 14% of the American population reported that they had never wed. Evangelicals were just a bit lower at 9%. However, those without a religious affiliation reported a much higher likelihood of never being married. In 1972, 36% of them had never walked down the aisle."

So that's the first clue.

Next, there's this: "Among the so-called 'nones' — those unaffiliated with any religious organization — the share of people who have never married, at 42% in 2021, has increased, but the rise has been far more modest. Still, that’s about 12 percentage points above the national average."

But look what's happened in the having-children question:

"In the early 1970s," the story says, "evangelical households had a little more than 2.5 children on average. That was just slightly higher than the average American, who was having 2.3 children. Nones were much, much lower than that. In 1972, the average none had 1.4 children.

"There’s unmistakable evidence of declining fertility rates in the data as well. The average respondent reported having 1.8 children in 2021, a dip of .5 over the last five decades. Evangelicals were also reporting declining birthrates between 1972 and 2000, but those numbers have slightly rebounded from there. The average evangelical has about 2.1 children now, slightly above the national average."

I'm not sure quite what causes people of faith, particularly those who identify as evangelical, to want to have more children than others, but perhaps it's being part of a community in which they feel their children can receive communal attention and care -- something less likely among people who are outside a faith community unless they intentionally create that community in other ways.

My first wife and I elected to have only two children -- in effect, replacements for us -- partly because of the concern in the 1970s about an exploding world population but also partly because we knew that journalists (she was one, too) don't generally get to be wealthy enough to be able to afford a boatload of kids, who are expensive to rear. At the time we had our children we were only loosely attached to any faith community despite having grown up in such settings. So it's hard to say that any particular religious ideas helped us make our two-child decision, except for concern for the health of the planet and its population.

In the end, I think it would be helpful if faith communities talked more openly about such matters and how to make decisions about marriage and pregnancy in ways that can guide adherents more clearly.

DORSET, Vt. -- Speaking of marrying and having kids and such, today I'm on my way to Dorset for a family wedding next Saturday and to visit family in my wife's home Green Mountain state. So there will be no usual second item here today.

P.S.: If you're reading this after 6 a.m. CDT on Sunday, you should be able to find my latest Flatland column posted here.