An optimistic rabbi worries about the resurgence of antisemitism

Early in the long and noteworthy career of Rabbi A. James Rudin, he served for two years as the assistant rabbi of Congregation B'nai Jehudah in Kansas City. (It's now located in Overland Park.) 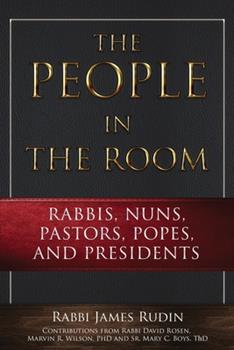 Knowing that and having heard him speak a few times, I asked the Kansas City Public Library to get a copy of Rudin's new book, The People in the Room: Rabbis, Nuns, Pastors, Popes and Presidents. (One of the things I love about our library here is that its staff is so open to suggestions for books to add to the collection. And Rudin's book now is available through the KCPL.)

Rudin served on the American Jewish Committee’s professional staff for more than three decades and was especially known as the AJC’s interreligious affairs director. So, yes, there is much in his book about his long and dedicated work in interfaith matters. And those who know him know he is, at heart, an optimist about humanity and about the future of the way the world's great religious traditions relate to each other.

That optimism is reflected in this book, for sure, but there's also a frank discussion of the reality that antisemitism, with several sources, is resurgent in the U.S. and around the world.

And it's important to hear Rudin's take on that.

He begins that discussion by noting the encouraging ways many branches of Christianity reacted to the Holocaust after World War II. Especially notable in his view was the Second Vatican Council's adoption of a statement about Christianity and Judaism called Nostra Aetate, which Rudin (pictured below) says "set in motion a revolution of the human spirit and sparked a serious and systematic effort by the Catholic church as well as other Christian bodies throughout the world to improve their past bitter and negative relationships with Jews and Judaism."

Today, however, "disturbing events have unexpectedly challenged my previous hopeful assumptions," Rudin writes. "Virulent lethal antisemitic acts, once small in number since the end of the Holocaust in 1945, have reemerged, especially in Europe and the United States. It is an epidemic with the potential to become a pandemic of hate." "In the United States," Rudin writes, "especially since the end of World War II, American Jews believed they were living in a new 'Golden Age' of security and freedom from the ugly scourge of antisemitism. . .For many Jews in the United States, there is now a growing sense of anxiety that antisemitism, emerging from both the political left and right, has moved from the shadows of society and the fringes of social media into the American political, social, cultural and religious mainstream."

What might be an answer to a re-emergence of this ancient hatred? Rudin's answer:

"I have long asserted we no longer require many additional Christian statements (against antisemitism). Fortunately, we have them in abundance, and they are easily available on the Internet." Instead, he writes, society must "move from what I term the wholesale emphasis on Christian-Jewish relations to the retail arena, a purposeful shift from a constant stream of high-level religious gatherings, denominational assemblies and meetings, and instead press forward with a continuing series of local, parish congregational-centered programs that include an exploration of current Christian liturgy, rituals, teaching, preaching, education, music, hymnology and all other features of church life that relate to Jews and Judaism. . .How Christian-Jewish relations play out on Main Street America is now more decisive and important than ever."

So my question for you is this: If you're part of a Christian congregation, what is your church doing to respond to the problem that Rudin so clearly identifies?

(P.S.: Some of you may remember this post from my blog published on May 11 of this year: "A story of the six million -- but now minus one." It told the story of how the family of a Holocaust survivor whose story was told in the book They Were Just People by Rabbi Jacques Cukierkorn and me had just discovered that one of the brothers of that survivor also survived, though the family didn't know that until now. The daughter of the man about whom Jacques and I wrote has just published this more detailed account of that family discovery story in The Detroit Jewish News. It's quite a story. I hope you'll give it a read.)

(ANOTHER P.S.: Speaking of resurgent antisemitism, that phenomenon was part of our discussion Thursday night at a meeting of the Midwest Center for Holocaust Education's board, on which I serve. MCHE does a terrific job of teaching people about the history of extremism. The recent exhibit about Auschwitz, which it sponsored at and with Union Station in Kansas City is a great example. If you're not a member of MCHE supporting the necessary work the organization does, you can become one at this link -- and you have lots of choices about the level of support you want to give.)

(I'm going for a P.S. record today: You don't have to leave home to learn more about the Holocaust. As this Jewish News Syndicate article reports, "The Illinois Holocaust Museum has launched a new virtual exhibition about the history of the Holocaust in the former Soviet Union told through the testimonies of Chicago-area Holocaust survivors and their families." The link for the exhibit is here.)

LEARNING TO DO RIGHT BY DOING WRONG

Soon after it opened a few years ago, the Museum of the Bible in Washington, D.C., gained a deserved reputation for acquiring artifacts that had been stolen or otherwise illegally acquired by others. It's had to return a number of things to the original owners or countries of origin. But its leaders seem to have learned to do the right thing now, and as this New York Times piece reports, the museum has "returned a handwritten gospel that is more than a thousand years old to the Greek Orthodox Church. . ." Some of this trouble for the museum came about because it clearly didn't have enough antiquities experts available to help it determine what it could legitimately acquire and what it should stay away from. Lesson learned, everyone hopes. By the way, the Museum of the Bible has a Kansas City connection in that its gorgeous front doors were crafted here, as I reported in this 2017 Flatland column.