What happens when the power of words frightens religious leaders?

Let's back up a little today to the attempted murder earlier this month of famous author Salman Rushdie, badly stabbed at a speaking engagement in western New York. 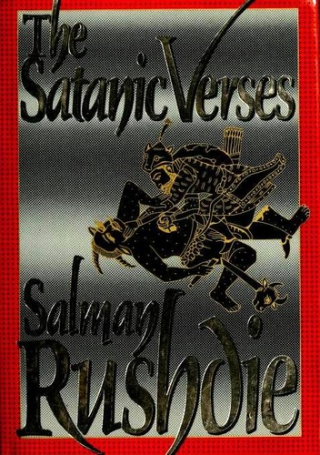 As the world knows, a fatwa, meaning a religious ruling, was issued by Iran's Ayatollah Ruhollah Khomeini after the publication of Rushdie's 1988 novel The Satanic Verses. It called for Rushdie's murder. He's lived a quite confined life ever since then, for no better reason than that a top religious leader was afraid of printed words and chose to order the writer of those words killed.

If you want a bit of background on what has happened in Rushdie's life and what's happened related to that fatwa since he published that book, Reuters has put together this appalling list of events and developments.

As the Associated Press then reported, Iran has denied any connection to the attempt to murder Rushdie, but even so an Iranian official "sought to justify the attack."

One reason I became a journalist, author and, eventually, a blogger is that I recognized that words have the ability to make people think things they otherwise might not, that words can have enormous power, that words can offer beauty and enlightenment -- sometimes, as author Kurt Vonnegut Jr. once said, at top speed.

Religion that is fundamentalist in nature is frightened to death of the power of words its leaders don't control and interpret. One obvious sign of fundamentalist religion is that usually its scripture is to be read in a literalistic way that admits of no contradictions, no historical errors, no opposing views.

That kind of reading, of course, kills the spirit of scripture and denies its very nature as words gathered over time and often written by more than one person. The Qur'an differs in that it's said to be the words of God spoken to the Prophet Muhammad by the angel Gabriel over more than two decades. But even Islamic scholars and imams insist that the Qur'an must be interpreted. Thus, in recent years, we've seen such published help with that task as The Study Qur'an. 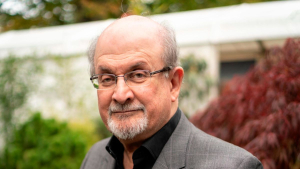 The man who ordered Rushdie (pictured here) killed, of course, wanted to limit the interpretation of Islam's sacred texts to a tiny group of well-controlled scholars. Similarly, Christian leaders who are biblical literalists insist that there's only one proper way to understand the text, which, of course, they believe to be inerrant.

I like the way, from a Jewish perspective, author Edward Feld puts this subject in his soon-to-be-published book, The Book of Revolutions: The Battles of Priests, Prophets and Kings that Birthed the Torah: "Most Jews who see the Torah (the first five books of the Hebrew Bible) as foundational to their lives still recognize, as I do, that we do not have it quite right yet -- we have not grasped Torah's truths in their entirety because the parts do not ultimately quite fit together. This is the very opposite of a creedal religion that maintains that adherence to certain fundamental concepts gives one certainty regarding issues of faith and salvation. Even as we attempt to comprehend every jot and tittle of the Torah, there is always a beyond to which it points."

Similarly, in her forthcoming book, Heretic: A Memoir, Jeanna Kadlec, notes that apparently biblical literalism was not the original way of reading the Bible. She writes about Charles Hodge, who was instrumental in the move toward literalism. Kadlec calls Hodge the "reigning theologian at Princeton Seminary for much of the 19th century." He wrote about this approach to reading the Bible in his three-volume Systematic Theology, published from 1871 to 1873.

Kadlec writes: "(I)t cannot be overstated how much Hodge's thesis, that the Bible was the completely inerrant, infallible word of God, was an astonishing break with Protestant church fathers and traditional interpretation of the authority and limitations of scripture. Martin Luther … used to acknowledge that the Bible contained contradictions and historical errors. Even the famously strict arbiter of human depravity John Calvin had been known to suggest that biblical writers were not particularly concerned with factual accuracy …."

So it's important to beware of scriptural literalists. Or people who read any document in a literalistic way, including the U.S. Constitution, which is how so-called "Originalists" read it, forgetting that even Thomas Jefferson suggested that the American people would do well to rewrite the Constitution about every 20 years. Wonder what it would say today if that had happened. Part of me isn't sure I'd want to know.

(Also: Here is a good column by a rabbi who argues this: "Salman Rushdie’s wounds are the result of a grim tendency present in all the Abrahamic religions — a tendency toward incivility, triumphalism and violence." And here is a Reuters piece explaining fatwas, or religious rulings, such as the one that called for Rushdie's murder. If you want to know even more about fatwas, here is a piece about them from The Conversation.)

THE SPIRITUAL VALUE OF VACATION

Did you take a vacation this summer? Did you really get away from it all for awhile? The American economy seems to run counter to the ancient advice from religion, which is this, according to this article in The Conversation: ". . .religious practices have long emphasized rest and contemplation, which not only improve a person’s mental and physical health, but can also boost a sense of spiritual well-being." I just spent a bit of time at a retreat center in southern Missouri, partly for that very reason. I'll have more to say about that next week here on the blog. School may have started already, but summer isn't over. Maybe there's still time to get in a bit of downtime yourself.