Home Archives Profile
Some scholarly help to unpack LGBTQ+ issues in religion
Is this the way to measure and improve spiritual maturity?

It's been my experience that a lot of Americans misunderstand the concept of having a separation between church and state. 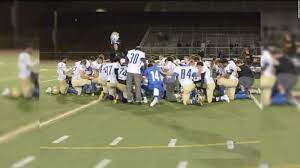 Which is to say that many people think it means that religion should have no voice in offering ideas for the government to consider. In fact, the wall of separation was not meant to keep religion's voice out of the public square but, rather, to keep government from meddling in religion.

That doesn't, of course, mean that this or that religion gets to set the nation's policy in any area. Indeed, it shouldn't mean anything close to that.

But over the years the courts at various levels have issued important rulings that, for the most part, have been helpful in figuring out where the separation line is or should be. Which is why, for instance, public school teachers are not allowed to lead students in prayer in classrooms.

But now a new U.S. Supreme Court ruling has complicated all of that and given public employees considerably more leeway in promoting their own religious views in publicly paid-for spaces.

As this article from the Conversation reports, "In Kennedy v. Bremerton School District – the Supreme Court’s first case directly addressing the question – the court ruled that a school board in Washington state violated a coach’s rights by not renewing his contract after he ignored district officials’ directive to stop kneeling in silent prayer on the field’s 50-yard line after games. He claimed that the board violated his First Amendment rights to freedom of speech and freedom of religion, and the Supreme Court’s majority agreed 6-3."

But the specific facts are important, and religion scholar Mark Silk, in this RNS column, notes that the court didn't get at least one of those facts right. He writes:

"The majority opinion in Kennedy v. Bremerton, the decision the U.S. Supreme Court handed down on Monday (June 27), begins with a lie: 'Petitioner Joseph Kennedy lost his job as a high school football coach in the Bremerton School District,' it reads, 'after he knelt at midfield after games to offer a quiet personal prayer.' (The photo here today depicts that.)

"In fact, the coach lost his job after he told his superiors at the school that he would continue his practice of praying at the 50-yard line immediately after games and insisted students not be prevented from praying with him, despite his employers’ cautions that the prayer sessions were getting out of hand: His postgame devotionals had turned into a media event, at which citizens and politicians had knocked over band members in a rush to join in."

(Although Kennedy says he's Christian, somehow he seems to have missed these instructions from Jesus [in Matthew 6:6] about praying: "But when you pray, go into your room, close the door and pray to your Father, who is unseen. Then your Father, who sees what is done in secret, will reward you.")

In addition to thinking about the coach's constitutional rights, we also should think about how exercising those rights might affect the students under his guidance.

It was my experience when I participated in high school sports that you did (or tried to do) what the coach asked you to do. Run three laps around the football field? You ran three laps. Do 50 pushups? You did 50 pushups. Pay attention to what the coach had to say after a game? You paid attention.

So when a coach kneels on the 50-yard line after a football game to pray, there's immediate pressure on players to join him, whether they are people of faith or not. You simply don't want to get on the wrong side of your coach. And when, beyond praying, the coach starts giving faith-based post-game pep talks, you listen. The coach's actions were coercive and manipulative. But this court, which now seems to have become something like a wing of the Republican Party (whatever that is anymore), decided there was nothing wrong with that.

The court, in other words, approved of using a publicly funded employee to promote a particular religious practice that was being used in an exploitive way, taking away the agency of high school athletes in much the same way the court, in overturning Roe v. Wade, has taken away moral agency from pregnant women.

It's one more example of why elections matter. But because the American system allows Supreme Court justices to stay in office for life, this is a problem we can't fix with one more election. This is a problem we'll be dealing with for decades, and it's unclear now what further damage this court will do to our religious freedoms and rights.

TRYING NOT TO GET 'LEFT BEHIND' IN NIGERIA

Sometimes religious beliefs lead to abhorrent actions. And when they do, it's time to question those beliefs. This recent example comes from Nigeria, where, as the AP story to which I've linked you reports, "Police in Nigeria have freed at least 77 people who were kept in a church basement by pastors who preached to them about Christian believers ascending to heaven with the second coming of Jesus Christ." This belief is a relatively new one in Christian history, as this Wikipedia entry notes: "The idea of a rapture as it is currently defined is not found in historic Christianity, but is a relatively recent doctrine of Evangelical Protestantism." Oh, you can find some words attributed to the Apostle Paul in the New Testament book of I Thessalonians, which believers in the rapture use to justify the idea. But in her 2005 book, The Rapture Exposed, Barbara Rossing argues that this idea about the world's future is a serious distortion of the Bible. I mentioned Rossing's book a few years ago in this blog post. The AP story about the situation in Nigeria isn't as detailed as I had hoped, but it still shows an example of the misuse of theology to get people to do what you want them to do. The idea of the rapture, by the way, gained wide popularity with the publication of the "Left Behind" series of novels starting in the mid-1990s. Always be wary of any theological idea that forms the basis of fiction. Not all such ideas are off base, but enough of them are that it should make all of us cautious.