Is the U.S. susceptible to another civil war? A really good question

After the American Civil War, the failure of Reconstruction meant that although the war itself may have led to the end of slavery, it did not destroy the idea of white supremacy, which was at the root of the war. That's why we Americans wound up with legal segregation, including all the racist Jim Crow laws, with lynching, with, finally, the necessary Civil Rights Movement. 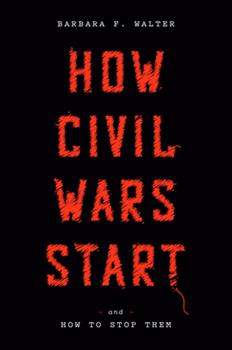 And it's why, after the Civil Rights Movement, we ended up with many bitter white people, especially (but not exclusively) in the American South, who believed they had lost something precious. (Thus, the "Lost Cause" mythology.) Many of those disappointed whites didn't own much or have much of an economic future, but in their own minds they at least had the advantage of being white.

I've been thinking about our Civil War and its aftermath recently as I've been reading University of California international relations professor Barbara F. Walter's 2022 book How Civil Wars Start: And How to Stop Them.

Much of the book has to do with countries outside of the U.S., such as Northern Ireland, Serbia, the Philippines, Syria, Ukraine and others. But underlying all of that is the idea that current political, economic and social conditions in the U.S. are such that we cannot categorically rule out another civil war. That may seem far-fetched, but it seems more believable now after the January 6, 2021, insurrection and, indeed, after both the 2016 and 2020 presidential elections.

I was particularly struck by Walter's observation -- based on years of her and other scholars studying civil wars around the world -- that when people feel they have been "downgraded" in some way, they are more open to action (sometimes violent) to stop it and regain what they think they've lost. She writes:

"Downgraded factions can be rich or poor, Christian or Muslim, white or Black. What matters is that members of the group feel a loss of status to which they believe they are entitled and are embittered as a result."

In some ways that comment quickly reminded me of one of the major errors that Hillary Clinton made in her 2016 presidential campaign. She referred to at least some supporters of Donald Trump as a "basket of deplorables."

Although it's far from the only stupid thing presidential candidates have said over the years, it rang with an appalling tone of dismissiveness from which she never recovered -- even if the candidate who beat her was himself an appalling man who became the worst president in American history (though I'm open to the argument that Andrew Johnson, given the long-term consequences of his failure to make sure Reconstruction succeeded, might have been worse in the long run).

What made Trump appealing enough to win not the popular vote in 2016 but the majority of votes in the antiquated Electoral College was his appeal to the very people Walter writes about in her book, those who believe they've been downgraded -- especially those who were so badly hurt economically in the Great Recession of 2007-'08. That economic downturn came about in many ways because of misguided government tax and business policies that were stacked against middle-class Americans but that mostly helped the richest Americans.

It's from such an attitude of being downgraded -- whether justified or not and whether economic in nature or not -- that you get protesters marching to this antisemitic chant: "Jews will not replace us." And you get such misleading political slogans as "Make America Great Again," which seemed to suggest that the greatest time ever in American history was the early 1950s when Ozzy and Harriet Nelson slept in separate beds on their TV show and Black people knew that they belonged in the back of the bus.

There are things about all of this that involve religious ideas, and we'll get to that in a minute. But back to Walter's book first.

She writes: "Human beings hate to lose. They hate to lose money, games, jobs, respect, partners and, yes, status. . .They are much more motivated to try to reclaim losses than they are to make gains. People may tolerate years of poverty, unemployment and discrimination. They may accept shoddy schools, poor hospitals and neglected infrastructure. But there is one thing they will not tolerate: losing status in a place they believe is theirs. In the twenty-first century, the most dangerous factions are once-dominant groups facing decline." (Think of the Great Replacement Theory.)

Among once-dominant groups facing decline in the U.S. are white males, especially those blue-collar and farm workers battered by the economy. So far the Democratic Party, which used to represent such folks, seems not to have a cohesive or coherent plan to regain their votes. It's a major party failure.

But ideas about feeling degraded -- whether they reflect reality or not -- lead to such dangerous groups as the Proud Boys, the Oath Keepers, the Three Percenters, the Ku Klux Klan and others. (And, yes, social media now play a huge, disastrous role in disseminating mis- and disinformation that fuels this catastrophic growth of extremism.)

It's from such groups -- which have other names in other countries -- that civil wars have sprung. As Walter writes, "People don't realize how vulnerable Western democracies are to violent conflict. They have grown accustomed to their longevity, their resilience and their stability in the face of crises. But that was before social media created an avenue by which enemies of democracy can easily infiltrate society and destabilize it from within. The internet has revealed just how fragile a government by and for the people can be."

Among the many failures in American society today and in recent years has been institutional religion's cozying up to such extremism in the form of white Christian nationalism, for instance, as well as religion's failure to find more effective ways of offering generative alternatives to radicalism. Yes, some people of faith have tried and some have done important work in this area, but not enough. And when people distort a faith tradition -- whether it's certain Christians in the U.S., Hindus backing nationalist ideology in India or Muslims supporting terrorists who murder women and children to make political points -- the results are inevitably catastrophic.

It's unclear where all this is going in the U.S. But Walter offers helpful scholarship to open our eyes to some of what's happening here and around the world, events that may lead to civil war. As I noted recently on the blog, Eboo Patel, founder of Interfaith America, writes in his new book, We Need to Build: Field Notes for Diverse Democracy, "The United States is the world's first attempt at a mass-level diverse democracy. That's one of the reasons we call this 'the American experiment' -- because not only was such a thing never tried before; people also considered it impossible."

It looks increasingly as if our job is to make sure that diverse democracy can, in fact, work for the common good. That outcome is not guaranteed. So we'll need the voices of religion to help us with that, not to undermine the effort by mistaking patriotism for allegiance to God.

A DECENT START BUT MORE IS NEEDED

Pope Francis did the right thing this week by going to Canada personally and apologizing for the role the Catholic Church played in the effort to strip away the language and culture of Indigenous children by sending them to boarding schools to turn them into white kids. But the right thing isn't always enough. And that's true here. Additional work should include an effort to educate not just all the world's Catholics but everyone, including other Christians, about the deformed theology that led to such disastrous developments as the Doctrine of Discovery. That 1493 racist piece of religious exclusivism helped lay the groundwork not just for the brutal boarding schools but for the appalling mistreatment of Indigenous people in Canada and in what became the U.S. And my guess is lots of white folks in church pews have never heard of it. You can't fix what you can't see or don't know exists. So, Pope Francis, you found the right place to start. Just don't stop there. Here is a piece in the Toronto Globe and Mail by an Indigenous writer making points similar to what I just made -- but with much more credibility than I have on this issue.

P.S.: My latest Flatland column is now online. It's about a Catholic priest who, through no fault of his own, has had what he calls a cloud over his priesthood. You can read it here.