Home Archives Profile
Is this the way to measure and improve spiritual maturity?
Readers of the Bible seem to be getting more discerning

The most important victims of the 9/11 terrorist attacks in 2001 were, of course, people. Nearly 3,000 of them died that day, including my own nephew, a passenger on the first plane to smash into the World Trade Center. 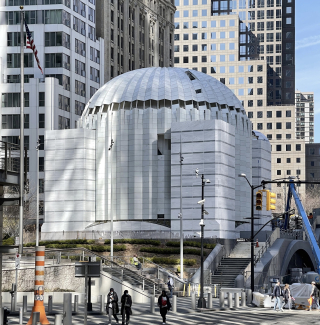 I tell that family story and I explore the roots of extremism (and what to do about it) in my last book, Love, Loss and Endurance: A 9/11 Story of Resilience and Hope in an Age of Anxiety.

But as we all know, there were non-human victims of the terrorists, too -- and not just the tall twin towers.

In fact, one of the structures severely damaged that day was a Greek Orthodox Church, St. Nicholas. Last week, a rebuilt St. Nicholas was consecrated as a national shrine.

I've been to Ground Zero in New York, as the twin towers site became known, several times and have paid at least a little attention to the slow progress to rebuild St. Nicholas. I thought I had a saved photo that I took of the not-yet-rebuilt site from a few years ago to use here today but, in my otherwise-perfect photo storage system, I can't find it. The photo that you see here today comes from this Wikipedia site.

The Religion News Story to which I linked you a couple of paragraphs up reports this: "The restoration had been stalled for many years, due to ongoing issues with funding. Since 2019, the rebuilding project has been funded and overseen by the Friends of Saint Nicholas, a nonprofit group that includes the Rev. Alexander Karloutsos, the former vicar general of the Greek archdiocese who will receive the Presidential Medal of Freedom later this week." (As he and several others did.)

One reason to pay attention to this church rebuilding news is that at its best and fullest, the United States is a nation of diverse religious traditions. And although Orthodox Christians make up only about half a percent of the U.S. population, they connect Americans to a rich history within Christianity, especially to what has been called the Great Divorce of 1054, when Christians split apart to become the separate Orthodox and Catholic churches.

So today you will find, Greek, Russian and other branches of the Orthodox tradition represented in churches in Kansas City and in communities across the nation.

America is a blooming flower bed of faith traditions (along with people who declare no allegiance to any such tradition), and there are all kinds of efforts locally and nationally to help people recognize the strength that religious diversity brings to the nation and to places such as Kansas City. For a national view of that, visit the website of Interfaith America. For a local view of that, visit the website of the Greater Kansas City Interfaith Council.

As Eboo Patel, founder of Interfaith America, writes in his new book, We Need to Build: Field Notes for Diverse Democracy, "The United States is the world's first attempt at a mass-level diverse democracy. That's one of the reasons we call this 'the American experiment' -- because not only was such a thing never tried before; people also considered it impossible."

Which is another reason to welcome back St. Nicholas.

WHAT MY PRESBYTERIANS MESSED UP

Sometimes groups to which I belong or support get it wrong, even if their hearts are in the right place. For me, the latest example is my denomination, the Presbyterian Church (USA), the national governing body (the General Assembly) of which just voted to condemn Israel's treatment of Palestinians by calling Israel an "apartheid" state. It amounted to borrowing a highly charged term from a different historical situation (South Africa) and applying it to the Israeli-Palestinian conflict instead of dealing with that conflict on its own terms. There's no doubt that the Israeli government has made a series of bad (at times grievous) policy choices about the Palestinians and about pursuing Israeli settlements on land the Palestinians think of as their own -- just as there's no doubt that the Palestinians often have been badly led by leaders who have made unfortunate and even deadly choices that have resulted in needless deaths and in some cases the express wish that Israel itself would be blown off the map. But this is a situation in which I think it helps not a bit to use bitter, condemnatory language to try to move along a peace process that has fatally stalled out for a long time. I don't have any specific answer for how to settle this fraught situation, but I'm sure that this kind of spat-out language won't help and I wish my fellow Presbyterians hadn't used it. Rather, we should be committed to a just, two-state solution that seeks Israeli and Palestinian autonomy and peace. Sigh.