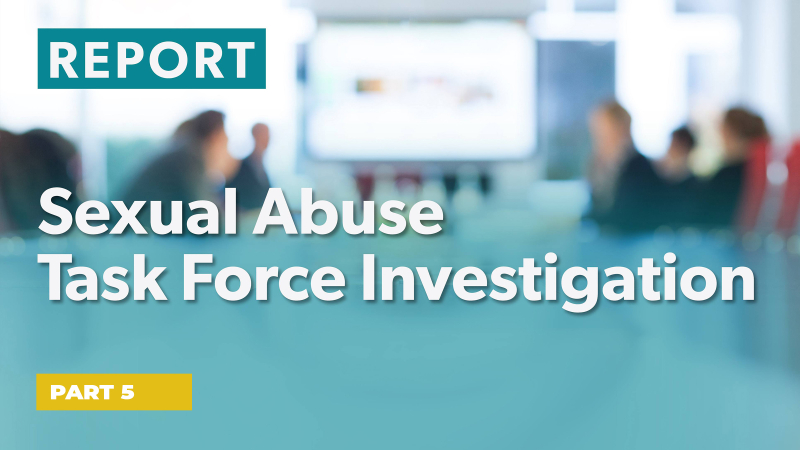 With both reluctance, dismay and, frankly, horror, I return this weekend to the recently released report on the independent investigation into sexual abuse in the Southern Baptist Convention.

Many others have rightly denounced the denomination's leadership for its complete moral failure in permitting such abuse to go on for so long. Similarly, others have called for the SBC to institute structural fixes that can help prevent this from happening again.

All that's to the good. And so was the decision to allow this independent investigation to go forward, though as this RNS story reports, it almost got derailed several times.

The issue is much deeper than that. And I thought Peter Wehner, a contributing writer at The Atlantic, pointed pretty directly at the problem in this article.

"The members of the SBC executive committee," he wrote, "didn’t emerge ex nihilo; they emerged instead from a culture that they claim mirrors Christianity but that in fact deforms it in significant ways. The men who come out of this culture see themselves as vanguards of doctrinal purity, protectors of the Church from the twin evils of liberalism and secularism. They are ever on the prowl, quick to identify those who disagree with them as heretics, inclined to view winsomeness as weakness.

"Many of these individuals have traditionally been champions of 'family values'; speaking out against sexual sin seems to occupy an unusually large space in their minds and imaginations. So does a barely disguised contempt for women and an embrace of 'militant masculinity'. . .”

It is extraordinarily difficult at times to see the ways in which the culture that surrounds us -- whether that's family, religion, community, political party, nation or something else -- keeps us from seeing how disfigured that culture can be. We need outside eyes to help us and we need a willingness to listen to what others are saying about what they recognize is deformed.

An example: The associate pastor at my congregation, the Rev. (now Dr.) Kristin Riegel, recently shared the thesis she wrote to complete work to receive her Doctor of Educational Ministry degree from Columbia Theological Seminary, a Presbyterian institution located near Atlanta.

In it, she described her childhood exposure to biblical learning and how, in the end, that was insufficient for her. But as she began to dig more deeply into how the Bible is presented in our Protestant denomination, she discovered that she had been missing a lot.

"I realized," she wrote, "no one stands alone as they read the Bible; one’s readings are shaped by their families, cultures, and communities."

"In order to disrupt white supremacy, I would need to transform my pedagogical practices. However, I knew I could not do this work alone; rather, I would need to work with others as together we sought to develop more liberative ways of teaching,
learning, and reading the Bible."

It's that kind of ah-ha moment that seems never to have happened to the leaders of the Southern Baptist Convention who created and covered up the scandal that now has been revealed in all its sickening details. Or, if such a moment happened for some of them, they ran away from it.

The fact is, we need others to challenge our thinking and to help us see the cultural ocean in which we swim. It's terribly difficult, if not impossible, to see all that on our own, although the SBC scandal is so atrocious that it feels like I'm letting the leaders off the hook by saying they needed help seeing the problem. They, of course, even in an unhealthy culture, should have seen it because it was so obvious and so evil. But if we don't understand the sometimes-demented ways in which our surrounding culture has affected our behavior and our thinking, we, like some SBC leaders and some Catholic bishops, will not respond in healthy ways to what should be understood as clearly malevolent.

(By the way, here is a piece by religion scholar Mark Silk in which he describes how the Catholic and the SBC scandals are alike and how they are different. And here's a story from Religion News Service about proposed SBC reforms in response to the scandal.)

Slowly, slowly, Christian denominations are doing away with bigoted barriers that have segregated LGBTQ+ people from others in their churches. The latest to open up is the Mennonite Church USA, which just changed its rules to allow its pastors to perform same-sex weddings and committed itself to fuller LGBTQ+ inclusion in its congregations. It's hard to explain why Christian churches, which should be leaders in liberation, have been so slow to welcome gays and lesbians. But a major part of that explanation has to do with how they read the Bible. Here is my essay on why the Bible should not be used as a weapon in this matter and why you should be wary of any religious body's rules that exclude people on the basis simply of who they are.