Just what has the U.S. Supreme Court wrought? 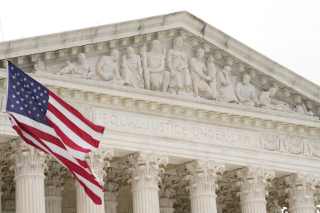 Responses have ranged from people outraged at the court's ruling to those happy about it.

I am not a lawyer and, thus, am not in a good position to make careful judgments about whether the initial 1973 case was decided correctly on the basis of judicial wisdom, procedure and precedence or whether this one was decided that way.

But they both can't be right, can they? Indeed, the court in recent years has drifted from a respected institution to another collection of powerful partisans -- mostly on the right, but also at times on the left, two political labels that hide more than they reveal. And court members have cooperated with the Republican Party to institute what amounts to minority rule in this country, given that the overwhelming majority of Americans did not want Roe overturned. And just as some wanted Roe overturned for religious reasons, some wanted to keep abortion legal for religious reasons. But now, in effect, the court has declared one religious view of abortion valid and other religious views of abortion invalid.

So my fear is that this new ruling will throw us into another period of religious rancor, to say nothing of a time of females (from whom much moral agency now has been taken by this court decision) being targeted with suspicion merely because they are pregnant and will need now to decide whether to give birth or abort. It's hard to think of a matter more personal than a decision about whether to get pregnant or to end a pregnancy. And in such personal matters, I think the government should play as small a role (often no role at all) as possible. (Just as I needed no government mandate or oversight to decide to have a vasectomy, women don't need government interference to make a decision about being pregnant.)

This is another case in which it matters a great deal how we read scripture, especially the Bible. The sad thing is that people often decide whether to be for or against abortion by picking out a small group of biblical passages that seem to address the matter but really don't. (That practice is called proof-texting.) So -- just as people often do with LGBTQ+ issues -- people will choose certain parts of the Bible and declare that they make abortion against God's will in most, if not all, cases.

Psalm 139, for instance, has been a go-to passage for people opposed to abortion. Among other things, it says, "For you created my inmost being; you knit me together in my mother's womb." Perhaps it would be helpful to explain poetry, metaphor and symbolism to some people. Oh, and science, too.

"What I'm saddest about today is the unholy stain upon the faith to which I've dedicated my life. The public face of Christianity is ugly, judgmental, vengeful, cultish and mean. It is everything Jesus taught -- (but) through a glass darkly, twisted into its opposite. It's hard to blame all of the people who see the Christian church as a demon in our midst, standing up for clownish buffoons and vicious ideologues. I guess the only thing to say is this: I am sorry about my siblings who have trampled on the vulnerable. I will work harder to cast out the false gods they've created and make Christianity about Jesus again."

Similarly, here is a video of leaders from my denomination, the Presbyterian Church (USA), reacting to the court's ruling. I might have said it in different ways, but I am in harmony with most of their thinking.

So expect more religious division in the country because of this ruling. Also expect more state-against-state division, given that the new ruling throws back to the states any decisions about whether to make abortion legal. In an already deeply divided nation, this additional reason for division will simply complicate our lives. In many ways, this decision is a replay of the old states-rights arguments that opponents of civil rights used for so long -- and in some cases still do.

I have said before in various venues that I wish abortion were quite rare but legal because sometimes it's the least evil of a series of evil choices. I say that as a male (meaning, of course, that I've never been pregnant) who has fathered two children whose births were planned and successful. My temptation on this whole issue is simply to do what one of my pastors suggested in a recent sermon (before the court's decision was final) that we all do: trust women to decide whether to abort. Ideally, that decision should be made in consultation with the woman's physician and in consultation with the father (assuming the father isn't a rapist or a sibling of the pregnant woman) as well as with any close friends or spiritual advisors the pregnant woman chooses. 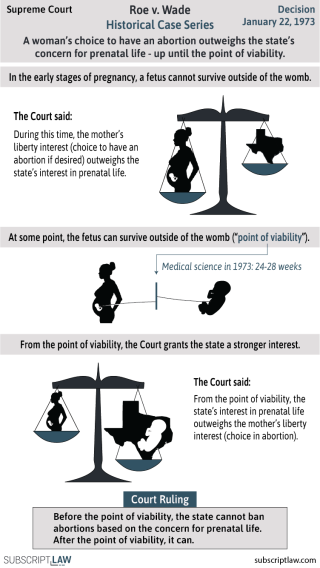 Before the 1973 decision, a lot of women got backroom, risky abortions (sometimes self-administered) and some of those women died because of it. I think we'll see a rise in that again. Whatever "pro-life" means, it shouldn't mean supporting a system that can lead to such abominations.

And I don't think abortion is the end of the issues this particular court may want to revisit. Will same-sex marriage be next? Or some civil rights decisions? This court seems to be turning into the kind of activist judicial system that people who identify as conservative have long warned everyone about.

One more thing I hope this decision does is lead to a national conversation about the role of the Supreme Court, how it's constituted and whether justices should serve for life.

But that's not the only national governmental system that should be under a microscope now. So should such bodies as the U.S. Senate, where someone from, say, Vermont, Rhode Island or Wyoming has as much power as someone representing California or Texas. One-person, one-vote? Not exactly. And if we're going to look at all the institutions that help to shape life in the U.S., let's also talk about the Electoral College, a weird old system that has proven flawed on more than one occasion.

So: Discuss. And let me know how you think we should proceed in light of the corner into which our institutions have painted us.

CHALLENGING THE SAUDIS ON ANTISEMITISM

The new U.S. special envoy to combat antisemitism, the brilliant and persuasive Deborah Lipstadt, is making her first foreign trip -- to Saudi Arabia. Anti-Jewish sentiment has a long history on the Arabian peninsula, and since the creation of Israel in the 1940s, that anti-Judaism has been accompanied by a lot of anti-Israeli sentiment. But these prejudices won't change unless they are talked about openly. And Lipstadt, whom I've had the privilege of hearing speak in person several times, seems like exactly the right person to help lead that conversation in the Middle East.

P.S.: If you missed my latest Flatland column when it posted this past Sunday -- it's about a terrific redlining exhibit at the Johnson County (Kansas) Museum -- you can find it here.