What can it mean to say that the Bible is 'America's book'?

Is the Bible -- as Christian History magazine now has proposed on two separate covers -- "America's Book?" 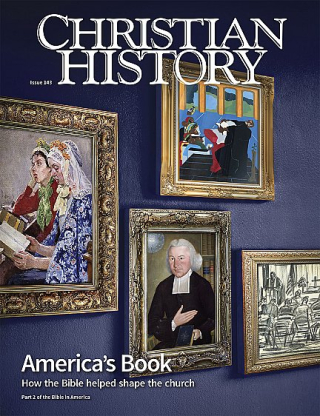 The first cover, published in 2021, had this as its subtitle: "How the Bible helped shape a nation."

The second cover, just published, used this subtitle: "How the Bible helped shape the church."

Well, I'm not going to use this blog to review, criticize or praise the magazine, of which I've been a fan for a long time, though I don't always agree with its tone or emphasis.

I've connected you via links to free online versions of the whole of those two issues of the magazine, and you can decide for yourself whether editors and writers handled the subject well. 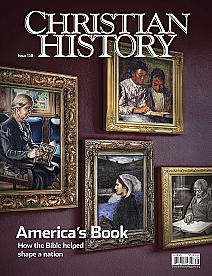 But let's begin by acknowledging that the Bible -- no matter which translation you prefer -- has had a strong and important role to play in shaping the people who helped to create the U.S. And, yes, I include among those shapers the European invaders who committed cultural and physical genocide on this land's Indigenous inhabitants. Indeed, one of the early drivers for many of the leaders of those invaders was the so-called Doctrine of Discovery, which gave them ecclesial warrant to brutalize the people they conquered and forcibly convert them to Christianity. Here is the full text (with some introductory material) of that 1493 doctrine.

The Bible also was the basis for the spread of what Christians call the gospel, or Good News. And that has led to countless organizations and to their acts of love and charity in our nation's history. It's why so many hospitals right here in the Kansas City area find their roots in one or another faith community -- and that's not limited to Christianity.

So, yes, the Bible has played an important role in American history -- for good (advocating the idea that every human being is a precious child of God) and ill (which led to the contention that slaves were not, in fact, precious children of God).

But a rather different American religious landscape has emerged in recent decades. For instance, at one point in the 20th Century the U.S. was simply a landslide for Protestantism. But Protestants now make up fewer than half the American adult population and that diminishment continues. Among the fastest-growing groups with a label that relates to religion in the U.S. are the "nones," meaning the religiously unaffiliated.

So the Bible has seemed less and less important to Americans. Where it still holds great sway, it does so in large part because of how its words are interpreted. For instance, the Bible has been used as a weapon in the debate about the role of LGBTQ+ people in our society and in our congregations. Those who read scripture with a certain determined literalness often oppose equal rights for gays and lesbians because they insist the Bible tells them to do that. By contrast, here is my essay posted elsewhere here on the blog about what the Bible really says about homosexuality. In it, I insist that the Bible has almost nothing to say on this subject except to urge everyone to love each person.

When the Bible seems to tell you that certain people are second-class citizens, you can be confident that you're reading it wrong -- and destructively.

From time to time there have been debates about whether the Bible should be used as a textbook in public schools -- not to use it to convert people but, rather, to understand how much the Bible has influenced our culture. I think it should be available for that latter purpose, if only so people who hear such phrases as "go the second mile" or "blessed are the peacemakers" or even the words "The Ten Commandments" have some clue what is meant. Biblical illiteracy is already a major problem in many congregations, and it's much, much worse in the general culture.

Well, I'd shy away from calling the Bible "America's Book," as the editors of Christian History have. For one thing, that's a pretty isolated view of a much larger world in which the Bible also has been -- and remains -- a major influence.

But, as I say, I've given you links to both of those issues of Christian History, so you can read them and decide for yourself. Read them with a discerning eye, of course, but also be open to learning something you didn't know. For instance, in the latest issue I learned that website Hymnary.org collected more than 3,000 hymns that use biblical texts as their basis. You could spend the rest of the day there, I bet.

The churches of the Southern Baptist Convention, facing a brutal sex abuse scandal in their midst, met recently to figure out the future of their faith community. And though it was noisy and contentious, the gathering held a promise of a brighter and more hopeful future. The RNS story to which I've linked you pointed to the determination of those who survived years of sexual abuse: They "refused to give up and by sheer force of will and tears and tenacity eventually moved the nation’s largest Protestant denomination to action. During the meeting, SBC leaders repeatedly thanked survivors, and the messengers approved a resolution asking survivors for forgiveness for their inaction." This story is far from over, just as it's far from over in the Catholic Church. But the Baptists seem to have set the right course, finally. Sticking to the path, however, will take the same kind of tenacity exhibited by the victims. And now the world is watching. 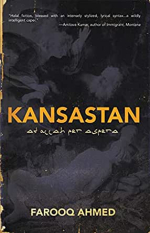 Let us now complicate even further the idea explored above that the Bible may be America's book. I bring to your attention a quite remarkable book of Islamic fiction called Kansastan, by Farooq Ahmed, who (full disclosure) is the son of Muslim friends, both of whom are physicians. Yes, the book is set in Kansas -- around the time of the American Civil War. But it postulates a group of Muslims there seeking to hold onto a mosque and its surrounding land against marauding bands of thugs from the evil state of Missouri. The story is bizarre, wonderful, imaginative and crack-me-up funny. The humor begins in the opening dedication, which says: "For my cousin, Faisal. Would that he had lived a shorter life." I didn't, of course, have any idea what that meant when I opened the book, but its gently sinister twist drew me in. There is, in this book, prophecy, including weird and false varieties. Which is what you might expect when the voice telling the story is that of a disabled goatherd who mostly serves as the mosque's custodian. And there is love here, too. In keeping with the oddity of the story, it is twisted, surreptitious, destructive love. Farooq Ahmed has a special gift for surprising language that manages to find exactly the right phrase when nothing but exactly the right phrase will suffice. I'm not sure how I missed knowing about this book when it was published in 2019, but I discovered it some months ago when I interviewed both Farooq and his mother for a column I wrote about a play called "The Hindu and the Cowboy." You can find that column here. And you can find Farooq's book not just on Amazon, but also at the Kansas City Public Library because I requested that the library order a copy -- which happened. You're welcome. (By the way, here is an insightful interview with Farooq Ahmed done by The Kenyon Review. It should help you make sense of this book.)