Should religious leaders keep their jobs for life?

Recent speculation about the possible resignation of Pope Francis should raise this question about models of leadership for all religious traditions: Is it wise to have a system that puts leaders in place for life? 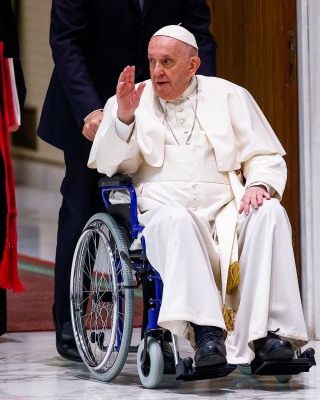 (Yes, a similar question is being -- and should be -- asked about being a justice on the U.S. Supreme Court.)

In the case of Francis, he's been an active, thoughtful, strong leader since his election in 2013. But he's clearly having health and mobility problems in recent months. For instance, he's been using a wheelchair recently, as the Associated Press story to which I've linked you reports and as you can see in this photo.

The rumors that he might choose the resignation route taken by his predecessor, Pope Benedict XVI, "gained steam last week," the AP noted, "when Francis announced a consistory to create 21 new cardinals scheduled for Aug. 27. Sixteen of those cardinals are under age 80 and eligible to vote in a conclave to elect Francis’ successor."

Some religious leaders aren't officially picked for a lifetime office, but that's sort of what they get anyway. Patriarch Kirill of the Russian Orthodox Church, for instance, was elected in 2009 and looks as if he's tied his future to the bloody hands of Vladimir Putin, who keeps changing the rules for how long he himself can serve as Russia's president.

I don't think term limits -- whether in religious life or in politics -- are always a good idea. But organizations can develop such a resistance to change that it's hard to tell their state from rigor mortis. And unless faith communities or political structures renew themselves with some regularity to meet changing circumstances, they're likely to drift toward irrelevance or, worse, errors based on the weaknesses of autocratic governing systems.

There is a useful debate to be had about how long pastors of any faith community should stay on the job. I recall one of the former pastors of my congregation, who had been on the job for nearly 14 years, told me one reason he was leaving is that he'd given us everything he could think to give us and had no new ideas.

But each religious tradition would do well to do a periodic review of how its leadership is chosen and how long someone can keep a leadership position.

If Pope Francis decides to quit for reasons of health and related mobility, it looks as if he's tried to assure that the college of cardinals will choose a successor who won't depart radically from the way Francis approached the job. And because I've mostly liked the job Francis has done, I hope that will be the case.

A few weeks ago here on the blog, I wrote about the new report showing that many faith communities, starting in the 1800s, were involved in the disaster of boarding schools for Native American children, the goal of which was to turn them into white people. One of the religious groups that helped to run such government-approved schools was the Society of Friends, or Quakers. Here is a commentary about all of this from a national Quaker leader. "The truth is," she writes, "we cannot undo the harm caused by these institutions. It is a permanent stain on our history. But by fully acknowledging the sins of the past, we can begin taking steps to chart a more just relationship with Native communities nationwide."

BIRMINGHAM, Ala. -- I arrived here this past Thursday to participate in the annual conference of the National Society of Newspaper Columnists. But on the way my bride tested positive for Covid-19, so we had to quarantine for a night in the conference hotel and then drive 12 hours straight home the next day. Then on Sunday I tested positive. Mostly minor symptoms (thank goodness I've been double vaccinated and double boosted), but still a pain. So you won't see me out and about for a while.