As the immoral, murderous war of desecration continues in Ukraine, many people have noticed that the leader of the Russian Orthodox Church (ROC), Patriarch Kirill, has chosen badly by backing the war criminal, Vladimir Putin. 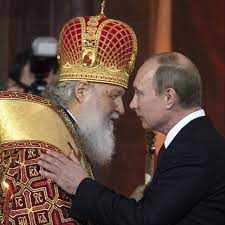 And there has been plenty of speculation about why Kirill has made such an abominable choice -- one that is, nonetheless, sadly consistent with the ROC's support of almost whoever has been in power in Russia across its history. I've written about that choice on my blog in recent weeks here, for instance, here,  here and here (in most cases not as the lead item of that day's post).

But now this analysis from the publication "Foreign Policy" suggests that homophobia has something to do with Kirill's backing of Putin.

For such a twisted agenda, it helps to have the backing of a well-known religious figure. Americans know about that.

Indeed, the author contends this: "At the heart of Kirill’s support for the war is homophobia. On Forgiveness Sunday — March 6 — he delivered a sermon, where he implied that the West had been engaging in 'the suppression and extermination of people in the Donbas' for years because 'in the Donbas, there is rejection, a fundamental rejection of the so-called values ​​that are offered today by those who claim world power.' Specifically, he said, the people of the Donbas had refused to hold gay pride parades; and thus, the West was trying to destroy them."

When religious leaders fall into the trap of relying on political leaders for approval and power, they'll come up with almost any excuse to continue the relationship. And that, in turn, damages not only their own religious tradition, it damages religion in general.

Which is just what Kirill is doing.

THE HUMAN PROPENSITY FOR CASTE SYSTEMS

If you've read Isabel Wilkerson's revelatory book Caste, you know that the social ranking system often associated with India goes beyond that country and beyond Hinduism. It turns out that there's now a dispute about using caste as an anti-discrimination category on college campuses in the U.S. This article from The Conversation explains that dispute and shows how widespread caste thinking and action is around the world. Read it and weep. 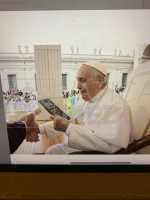 P.S.: I just got a fun email from Stacey Perkins Rock, the wife of my former pastor, now living in Europe: "Thought you’d like to know that I personally handed the Pope a copy of your book today. If you get a call from the Vatican City area code, pick up, it’s not a prank!" The book she's talking about is one I wrote with her husband, the Rev. Dr. Paul T. Rock: Jesus, Pope Francis and a Protestant Walk into a Bar: Lessons for the Christian Church. I'll be standing close to my phone for a few days, but prefer that if you're not the pope you don't call and pretend that you are. (Paul now is senior pastor of the American Church in Paris.)