What happens when 'alternative facts' get swallowed whole? 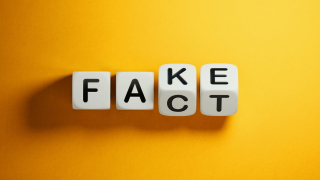 Notice that he begins with what is "true."

The problem today, as this commentary piece in The National Catholic Reporter suggests, is that many people today seem unable to discern truth from fiction because of " a common disregard for widely available factual data and an overemphasis on data that is missing or limited in scope. Conspiracy thinkers believe in their own capacity to discern information and perceive patterns of connection that others can't see, while their counterparts feel angry and exhausted at the very prospect of trying to have another conversation that — based on previous experience — will go 'absolutely nowhere.'"

The author of the piece, Ann Garrido, teaches homiletics at Aquinas Institute of Theology in St. Louis.

She contends -- persuasively -- that our failure to understand what is true isn't merely a political problem having to do with bizarre QAnon conspiracy theories, it's also a moral problem and a matter of concern "in terms of faith."

Garrido writes that "Western Christianity understands the world as existing on its own separate from our minds and regardless of what we believe about it." And yet, she says, "Our beliefs do matter, however, because they motivate our actions. It is in our own best interest to make sure our minds align with reality, or our choices will be poor ones."

So why does conspiracy thinking rooted in fiction matter? Garrido contends that "if we know the information to be fictitious and nevertheless assert that it is true, then we are lying and in a state of sin. Moreover, if others have tried to point out to us that we are mistaken and we refuse to receive more accurate information when we could do so as creatures gifted with reason, we are culpable of the sin of 'vincible ignorance' — a term from the past that we probably need to take out of the closet and dust off.

"As a church we need to treat conspiracy thinking with the same vigor as other significant moral issues of our time, such as immigration policy, abortion, racism and human trafficking. . .Parishes and dioceses could be doing much more to take on conspiracy thinking as a moral crisis."

All faith communities -- Christian or not -- have an obligation to teach their adherents, but especially young people, how to recognize what is true and to contend for that truth in the face of conspiratorial nonsense. And yet, despite the importance of this task, we regularly read about pastors who continue to promote the Big Lie that Donald Trump won the 2020 presidential election.

Garrido insists that "a commitment to truth is fundamental to our lives as Christians. We witness to this by trying to always make sure that our own minds are aligned with reality. At the same time, we witness our commitment to truth by the way that we choose to 'be true' to one another even in situations marred by untruth."

If our children can't master this allegiance to truth by the age of discernment, the future is bleak, indeed. So the question is this: What are you and your faith community, if any, doing about this?

OUR THEOLOGY MATTERS IN UVALDE MASSACRE

In chapter 3 of the biblical book of Amos, one of the so-called minor Hebrew prophets, he asks a series of rhetorical questions to which the answers, at least to his hearers in the 8th Century BCE, was obvious. One of them was this: "Does disaster befall a city unless the Lord has done it?" The obvious answer: Well, of course not. The prevailing theological idea then was that God gets deeply involved in everyday affairs and that if something bad happens to people it's because God is punishing them for some misdeed. (The book of Job was written at least in part to counteract that idea.)

So in terms of what Amos wrote, what sin or evil did 19 children and two of their teachers in Uvalde, Texas, commit that required divine judgment on them via gunshots? Most of us (but not all) today, of course, recoil at the idea that those children deserved to die for some reason -- and, worse, that God arranged it. Rather, most of us -- no matter the faith tradition -- are more attracted to an image of God that suggests God suffers with us and walks with us through pain. Some of us would add that at times God suffers on our behalf; thus, Jesus on the cross.

I say all this just to suggest that when bad things happen to innocent people it helps to think about that theologically. With enough discernment we can use such thinking to recognize that the systems we have created are failing us and that we have a responsibility to fix them. One of those systems has to do with laws regulating firearms. It's clearly a broken system, with a majority of citizens believing it needs fixing and a majority of our lawmakers unwilling to do what needs to be done.

The answer is not to give up and accept the death of those beautiful children. One of the answers is to change our lawmakers. Another is to change the way we finance elections so that money from such groups as the National Rifle Association doesn't distort our political system. Related to that is to do what we can to affect the U.S. Supreme Court's decision in the Citizens United case that ruled corporations are people and cannot be prevented from spending almost unlimited amounts of money to elect candidates. That ruling has distorted our political system in countless ways.

But to choose to work for changes, it helps to understand our own theology. If it buys the idea that the evil in the world is simply a sign that God is punishing us, then we let children be massacred without responding to their deaths in any meaningful way. The other option is to join Kansas City area pastors who this week gathered together to ask all of us to help end this violence against our children. I'm with them. You?

(To add to your resources for thinking about this difficult subject, here's an RNS story about a woman wounded in a school shooting in 2013 and about the book she wrote to help people know how to respond to mass shootings.)

P.S.: My latest Flatland column -- about religious congregations joining together to seek systemic answers to homelessness and mental illness -- now is online here.