Home Archives Profile
Here's another reason Russia's church leader is Putin's puppet
Finally, a start on an accounting of a shameful page of U.S. history

A story of the Six Million -- but now minus one 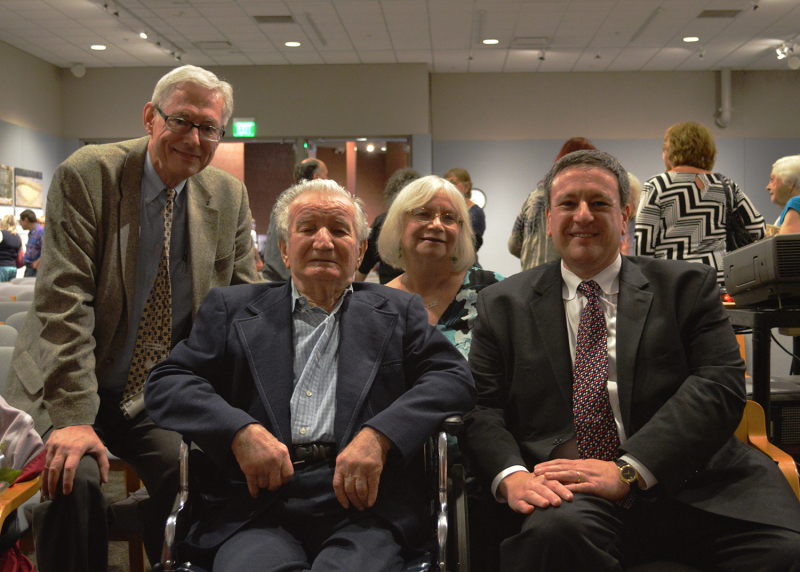 When Rabbi Jacques Cukierkorn and I published our book about people in Poland who rescued Jews there from the Holocaust, the very first story we told was about a survivor named Zygie Allweiss, now of blessed memory. And in that story in They Were Just People: Stories of Rescue in Poland During the Holocaust, we described how Zygie and his brother Sol -- later residents of the Detroit area -- were "the only Holocaust survivors from their large family." We even named all of Zygie's other siblings, Sarah, Loeser, Gittel, Mendel, Rachel, Fishel and Frimcha.
So today it's time for a joyful update. Zygie and Sol were not the only siblings to survive. Fishel, it turns out, made it, too. Zygie's daughter, Esther Allweiss Ingber, sent me a note the other day saying, "Good morning, Bill! Something very exciting has happened in my life! One of my father Zygie's older brothers who escaped to Russia after Poland was invaded in 1939 survived the war!"
(The photo here shows Fishel and his wife, Klara. The top photo shows Zygie and his daughter Esther with Rabbi Cukierkorn and me a few years ago when Jacques and I went to Detroit to speak about our book.)
As Esther explained, "Fishel Allweiss' granddaughter in Israel, Ira (short for Irina) Kuravsky, found Zygie's Page of Testimony on Fishel. Zygie submitted pages on all his family members to Yad Vashem in 2011. Ira contacted me yesterday on Facebook, coincidentally on Holocaust Remembrance Day.
"Fishel thought his whole life that his entire family had died in the war. He searched for them in Poland. He heard they died in a fire. How overjoyed he would have been to know that my dad and uncle, Zygie and Sol, survived and were living in America. And vice versa. . .I'm blown away." (Fishel, who worked as a watchmaker, died in 1981 of cardiac arrest.)
(Yad Vashem, by the way, is the Israeli Holocaust authority. It has an archive of Holocaust survivor records and it's the agency that awards the title of "Righteous Among the Nations" to non-Jews who saved Jews from the Holocaust and whose stories can be verified.)
Esther adds this: "Ira told me her grandfather Fishel was 18 in September 1939, when Germany invaded Poland. Fishel and his brothers Loeser and Mendel, and their father Jacob, were taken into the Polish Army. Fishel was badly injured."
A note from Ira to Esther filled in these details: "We knew about a family of 11 people. . .even names, but at home it was forbidden to talk about it. Grandpa (Fishel) was crushed by his searches, would travel to Poland after (the) war and everything. They would always tell him that everyone (was) burned in the synagogue. He was more depressed (after hearing that), and would turn to alcohol. He felt he had failed, and had failed to save the family, and he was alive and the rest of the family was gone, and (he) was unable to tell about his life in Poland. Perhaps Grandma (Klara) knew more (about Fishel's life before the war) but (that) was always a very sensitive subject at home."
One reason Fishel's family didn't connect with Zygie and Sol Allweiss while they still were alive is that the family thought their last name was spelled differently, as Alvais. Esther says that "Alexander Alvais of Israel, Ira's first cousin and the older son of Fishel and Klara's older son Arkady, wrote me this: 'We always thought that we were Alvais, and it was the problem when we try to find some information. Fishel did not speak English and did not write the family name. So we write it like we hear it. And from today we understand that it was wrong.'"
Now, says Esther, "I'll be learning more and sharing my family details with my new first cousin once removed."
This joyful story, of course, has to be set in its historical context, which means that most of Zygie's family perished at the hands of Hitler's Nazi killing machine for just one reason -- that they were Jews. Thus, they were among the six million other Jews murdered for being Jewish. And even though Fishel survived, it sounds as if his post-war life was not a happy one but, rather, one trauma after another thanks to Hitler's "Final Solution."
All of that brutal reality, of course, doesn't -- and shouldn't -- diminish Esther's happiness of discovering that her Uncle Fishel survived. But what a different story it would have been if the anti-Judaism promoted by the Christian church almost from its beginning had not helped to birth modern antisemitism and had not Hitler been infected with it and empowered by the German people to act.
Some of what we think we know about history turns out to be wrong. And sometimes that's good news, even if it's tempered by a surrounding catastrophe.

We know now, of course, that many Jewish families were unable to bury their dead in the Holocaust. It's one of the many ways Hitler's Nazi regime dehumanized people. And burial can be an important, healing ritual, as this article from The Conversation makes clear. As the author, Dimitris Xygalatas, notes, "In all cultures, people clean, protect, embellish and carefully deposit their dead. Muslims wash and shroud the body before interring it. Hindus may bathe it with milk, honey and ghee and adorn it with flowers and essential oils before cremation. Jews keep watch over the deceased from the time of death until the burial. And many Christians hold wakes at which family members gather to pay tribute to the deceased." And he concludes with this stark note: "Given the importance of those rites, it is also striking that the Russian defense ministry has reportedly been reluctant to bring their own dead back home, because they are concerned with covering up the scale of the losses. This seeming indifference to the suffering of Russia’s own people and their need for closure may be yet another act of dehumanization."