Home Archives Profile
Two lives, two models for living well however long we have
Making sure journalism about religion gets terms right

What can we learn from those who witnessed the crucifixion of Jesus?

On the Christian calendar, Good Friday happens this week. On the Jewish calendar, Passover begins at sunset that same day. And on the Muslim calendar, Ramadan began April 1. 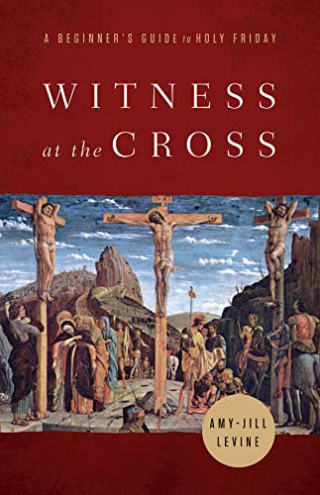 So I can't think of a better time than this week for adherents of all three religious traditions to read a new book about Good Friday by a New Testament scholar who is Jewish. Thus, this weekend I introduce you to Amy-Jill Levine's small (151 pages) new book, Witness at the Cross: A Beginner's Guide to Holy Friday. (An aside: The Qur'an says Jesus, Islam's second most important prophet, wasn't crucified but, by a miracle, was saved by God.)

If you are familiar with Levine's fine work (and, if not, why not?) you will come to this one with high expectations that she not only will teach you things you didn't know (but maybe should have) but she'll also offer an approach to learning that you can carry into other areas beyond theology. And you will not be disappointed.

She challenges readers to challenge themselves and the world around them, to ask hard questions, to not settle for simplistic answers.

Indeed, she encourages readers not to walk away from their doubts or the anger they may have felt at various times in their lives, whether that has to do with religion or simply living.

This approach will be helpful in trying to understand the cry of Jesus from the cross, "My God, my God, why have you forsaken me?" Indeed, Levine deals at some length with that, noting that it's the opening line of Psalm 22.

Although Levine is writing about an event that happened some 2,000 years ago, she always looks for ways to make it relevant to what's happening in the news today. For instance, when Pontius Pilate asks Jesus about whether he's "King of the Jews," Jesus tells him that his "kingdom is not from this world." Levine then asks this: "To what extent should church and state be mutually implicated? If Jesus is not a king in an earthly political sense, why do some of his followers want their political systems to be 'Christian' ones?" Why, indeed.

A few pages later she explores the question of what it really means to be "saved." In a word, it's not a simple concept. And if your idea of being "saved" is simply that you'll go to heaven, you may want to pay attention to the ways in which Levine will complicate your thinking in what she writes. As she notes, "in the Gospels, salvation is not simply a rescue from present danger; it is also a state of a right relationship between humanity and divinity."

Levine understands -- and tries to teach the rest of us -- that the Bible is not a simple book, nor one that can be understood in only one way. She writes: "The Bible, I have often said, is a book that helps us ask the right questions. It does not always provide answers, but by encouraging those who hold it sacred to speak to each other about difficult matters, it may lead us in good directions." And this: "I don't appreciate biblical studies that avoid the hard questions, whether of history or theology; I have known too many students who are shaken to their core in biblical studies classes when they suddenly realize that there are contradictions in the Bible."

The number of people -- and their identities -- who were at the cross on Good Friday is uncertain. But Levine is right to assert this: "Rather than engage in the futile attempt to determine who exactly these witnesses were, what they saw and what they did, we readers do well to listen to their stories and see how their stories transform us. At that point, we pick up the story ourselves."

Which, of course, is a primary reason for reading the Bible -- or any sacred text -- at all.

WITHOUT FINANCIAL GUARDRAILS, THIS CAN HAPPEN

The African Methodist Episcopal denomination is facing several lawsuits alleging the church badly mishandled its pension fund and lost tens of millions of dollars. One of the lawsuits alleges that the church’s Department of Retirement Services “invested Plan assets in imprudent, extraordinarily risky investments that ultimately lost nearly $100 million of Plan participants’ retirement savings.” The courts, obviously, will have to straighten this out. But it's one more clear reminder to faith communities that they, too, need competent financial advisors, honest employees and, perhaps most important, reliable systems of financial accountability. Depending on the good-heartedness of human beings without such restraints almost inevitably leads to disasters. God knew that. Which is why the Ten Commandments exist.