Home Archives Profile
What can we learn from those who witnessed the crucifixion of Jesus?
A time to unpack what forgiveness and apologies mean

Writing about religion, especially as a journalist (as opposed to an academician or a theologian), can be a tricky business because it's important to know a lot about many faith traditions and to be able to use the right terms. 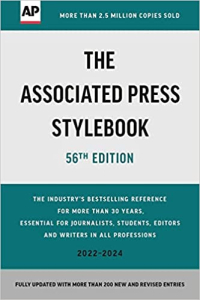 To help with that, the Associated Press is publishing a new "Stylebook," which will have quite a few additions and modifications in its section about coverage of religion. When I was at The Kansas City Star, we used both the AP Stylebook and a special local stylebook for various Kansas City references (as in, it's "the two Kansas Citys," not "the two Kansas Cities").

A stylebook that deals with religion, whether national or local in scope, has to pay close attention to how adherents and leaders of this or that religion refer to themselves and their tradition. For instance, as David Crary, the AP’s religion news director, explains in the Deseret News story (to which I've linked you above) about the new AP stylebook, "One of the most complicated things we did was to make 'Catholic' the default reference to Catholicism rather than 'Roman Catholic.' We consulted like crazy because we wanted to be sure that Catholic authorities were on board. They had a lot of detailed input for us."

Again, it comes down to how followers of a particular tradition prefer to be known or called. When, for instance, referring to people in my denomination, the correct term is "Presbyterians," not "The Frozen Chosen," even though the latter is a label we sometimes jokingly (sort of) apply to ourselves.

Holly Meyer, the AP's religion news editor, explained to the Deseret News what went into this revision of the AP Stylebook: "When we were given a green light to go ahead and revise the Stylebook, David (Crary) and I knew we needed help. We tapped three outside experts to go through it all and review it and give us feedback: Mary Gladstone (copy editor for Religion News Service), Bobby Ross Jr. (editor-in-chief of The Christian Chronicle and former AP religion reporter) and Richard Ostling (another former AP religion reporter). Their feedback was our guide for what entries to add."

Getting the descriptive words right in covering religion is more than a way to be as accurate as possible, it's also a way of showing respect to adherents and leaders of various faith traditions. And all of us certainly have learned various derogatory terms that have been used to describe this or that religious community. Such terms simply add to the misunderstanding and, frankly, hatred in the world. And why do we need more of either?

SHOULD THIS CHURCH BE PUNISHED? IF NOT, WHY NOT?

Should the World Council of Churches expel the Russian Orthodox Church because it's essentially a Putin hand-puppet? This RNS article examines that question -- which has no easy answer. On the one hand, the ROC's patriarch has been an appalling enabler of Putin. On the other hand, the Rev. Ioan Sauca, acting general secretary of the WCC, makes this interesting argument: “It is easy to exclude, excommunicate, demonize; but we are called as WCC to use a free and safe platform of encounter and dialogue, to meet and listen to one another even if and when we disagree.” True, but at what point does that approach amount to having tea and crumpets with Stalin?

P.S.: As a new member of the board of SevenDays, I invite you to participate in this year's SevenDays events, which you can read about at the link I've given you. All this started after a neo-Nazi murdered the son and father of Mindy Corporan and the wife of Jim LaManno at Jewish sites in the KC area in 2014. You can read about all that and how Mindy has dealt with the trauma by getting her new book, Healing a Shattered Soul. I especially hope to see you at the walk for kindness this Sunday at the Liberty Memorial.