Home Archives Profile
Are scripture translators missing some words?
What is widespread charity? A sign of widespread failure

How do religious leaders reach people in congregations? 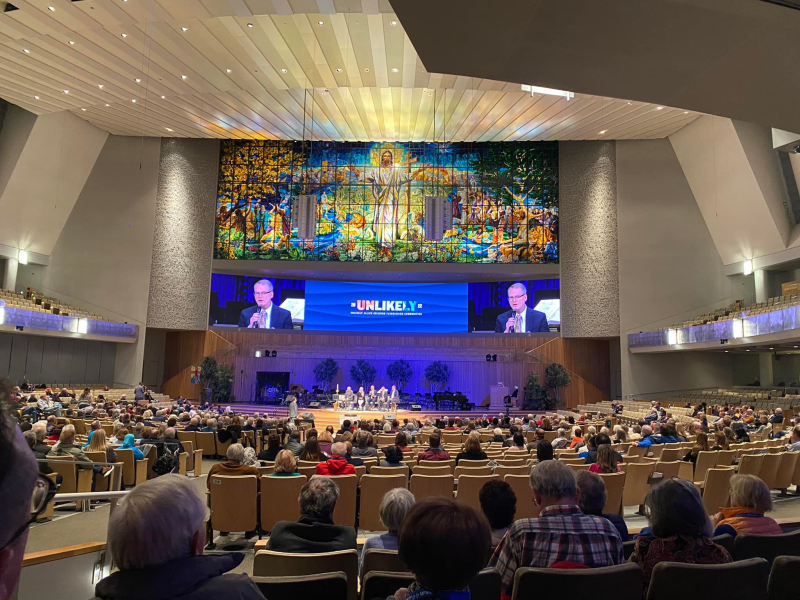 Many faith communities maintain offices in the capitols of the country in which they're headquartered to be able to promote legislation and policies that conform to their traditions and beliefs. 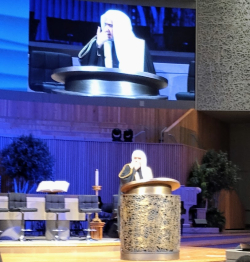 I'm guessing that if you polled the people in the pews of 100 randomly chosen PCUSA churches this Sunday, you'd find that the percentage of people who even know that office exists is quite low. Just as you'd find few people in those congregations who keep up on many of the resolutions the church's national governing body (the General Assembly) passes.

And we Presbyterians are not unique in this. Some faith communities do better than others in keeping people informed about what their leaders are doing and saying and what difference it makes at the congregational level. But, in my experience, not many do it well.

I was thinking about this the other evening when I attended a gathering at the United Methodist Church of the Resurrection called "Unlikely." Under the sponsorship of the Multi-Faith Neighbors Network, it brought together Jews, Christians and Muslims committed to understanding one another and working together.

One of the features of the evening was the distribution of the "The Charter of Makkah" (or Mecca, as it's often spelled). It's a document produced in 2019 and signed by many worldwide Muslim leaders. It calls for international religious harmony and understanding and stands against radicalism. (And my guess is lots of Muslims around the world have never heard of it.)

As this Wikipedia entry on the charter notes, it was conceived and produced by the Muslim World League and "was written to create a pan-Islamic set of principles that supported anti-extremism, religious and cultural diversity, and legislation against hate and violence."

In other words, it's a worthy effort advocating ideas and actions that would improve the world considerably if they were implemented.

But it's also well worth noting that the Muslim World League is funded by the Saudi government and has been since it was formed in 1962. The Saudi government has been a promoter of the rigid Wahhabi form of Islam for a long time. But in recent years the league has been denouncing extremism, and the Charter of Makkah seems, at least on the surface, to be evidence of that.

In any case, I was glad that roughly 1,000 people were in the sanctuary of the Church of the Resurrection to be exposed to these ideas and to hear from representatives of the three Abrahamic faiths about ways to understand each other better and cooperate.

But almost every time I have attended such an event -- called interfaith, multi-faith or inter-religious, depending -- over the last 25 or so years, I wonder whether organizers are simply preaching to the choir. Is the message getting moved from leadership to people in the pews? Or is this another example of people at the congregational level not hearing what leaders are saying or doing either out of apathy or mediocre communications or something else?

In the end, although I admire the effort made by the organizers of the "Unlikely" event, the continued presence of religious radicalism around the globe makes me wonder what else could be done besides such interfaith events. Still, as I say, there were roughly 1,000 people there the other evening and it was a fairly diverse crowd. So maybe I should be happy with that.

(The photo at the top here today, taken by Eyyup Esen of the Dialogue Institute, shows some of the crowd at the recent "Unlikely" event listening to the Rev. Adam Hamilton, founding pastor of the Church of the Resurrection. The other photo, by me, shows Dr. Mohammad al-Issa, secretary general of the Muslim World League, and who was the main speaker at the event.)

The Vatican, especially Pope Francis, has been thinking about not just the people in the pews but also about those it and he would like to have in the pews. Thus, it has just announced a restructuring of the Vatican's central bureaucracy so it can focus more on evangelism. (Here is a story about this from the Catholic news site Crux.) The new document changes the names of governing bodies from congregations and councils to "dicasteries." The RNS story to which I've linked you in the first link above reports this: "Among the 16 dicasteries, the newly constructed Dicastery for Evangelization is given top listing, just ahead of the newly reformed Dicastery for the Doctrine of the Faith, the oldest and, for centuries, arguably the most powerful office of the Roman curia. As a sign of the office's significance, the dicastery for evangelization will be headed directly by the pope — a parallel to how the Roman pontiff directly headed the doctrinal office until 1968." It's been nine years since Francis was elected, meaning it's taken nine years for this reorganization to come into being. It's another reminder of how slowly this church -- and religion in general -- often moves.

The Good for Nothing Tree, by Amy-Jill Levine and Sandy Eisenberg Sasso, illustrated by Annie Bowler. This is another in a lovely series of children's books drawn from the parables of Jesus. Levine, a New Testament professor and author of many books, teams again with Sasso, a rabbi emerita and author, and Annie Bowler, the illustrator, to explore one way of understanding the meaning of the parable of the barren fig tree. It's a book about patience and sticking with a goal even when it may seem silly to do so. Make sure this is in the hands of teachers of children in your congregations, no matter whether Christian, Jewish, Muslim or something else. My eight-year-old granddaughter read it to me and loved it.

P.S.: There's further evidence of a welcome split among Orthodox Christians over Vladimir Putin's war on Ukraine. The Orthodox Public Affairs Committee has issued this statement harshly criticizing Patriarch Kirill, Putin's buddy and leader of the Russian Orthodox Church. Kirill and others close to him, the statement says, "are all complicit in not only supporting the invasion of Ukraine, but also in perpetuating the lies of the government against their own people. Rather than standing up to Putin and his cronies, they are as guilty as the rest." It's refreshing to hear such truth spoken by religious leaders.