Why we still must know and care about Afghanistan 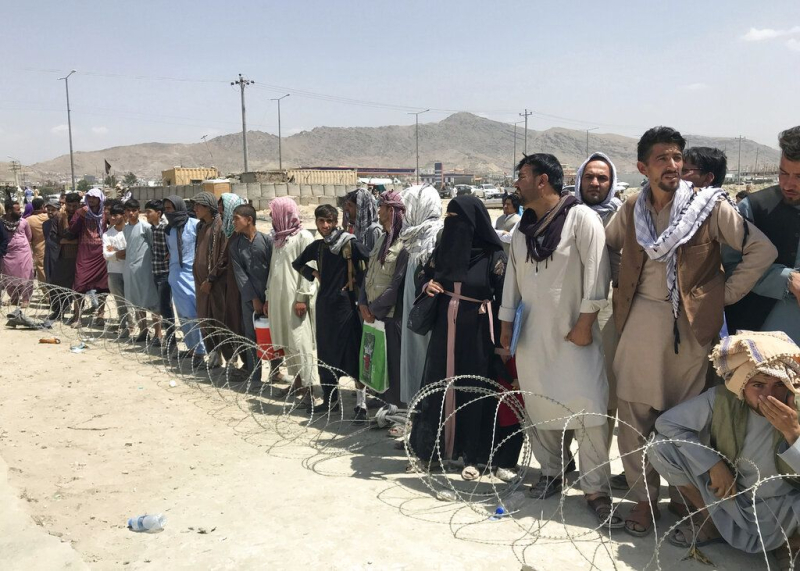 In so many ways, Afghanistan has disappeared from the radar of many Americans. The government there collapsed last August, the Afghan army dissolved, tens of thousands of people were evacuated from the capital of Kabul and the brutal Taliban came back into power. Beyond that, not much has been reported since then.

(The top photo of Afghans at the Kabul airport in August 2021 was taken by the Associated Press and can be found here.) 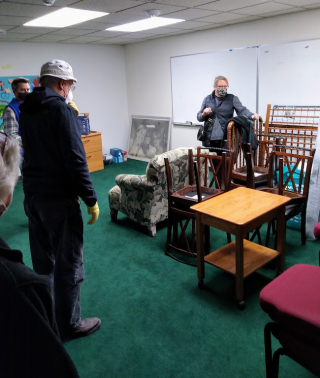 Only now, in fact, is the story of the Forever War there and the incompetent ending of that war and the exodus of Afghan citizens and U.S. troops being told. At least in part. And that story has much to say to people of faith and about the central values of the world's great religions.

The place to start is with this story, headlined "The Betrayal," in the current issue of The Atlantic magazine. The reporting done by George Packer of the magazine's staff is detailed, heartbreaking and illuminating. No American president who had anything to do with the 20-year war in Afghanistan comes off looking good. Far from it. And none deserves to look good. Indeed, Packer begins his sorrowful tale this way: "It took four presidencies to finish abandoning Afghanistan."

I want to say here what I've said before here and in other venues. I thought the U.S. was justified in invading Afghanistan shortly after the 9/11 terrorist attacks as an act of self-defense. After all, al-Qaida terrorists who murdered nearly 3,000 people that day, including my own nephew, had trained in Afghanistan, the base of their leader, Osama bin Laden.

But I also thought at the time that a military effort to wipe out the al-Qaida training camps and prevent further terrorist nests from operating there should have taken no more than perhaps a year or two.  As we know, however, President George W. Bush and his administration willfully lost focus and began to concentrate on what turned out to be the lie that Iraq's authoritarian butcher, Saddam Hussein, had weapons of mass destruction. So instead of finishing the job in Afghanistan, Bush ordered an attack on Iraq, which turned into another long war of costly blood and treasure.

When the end for American troops finally came in Afghanistan under an agreement reached between the Taliban and President Donald Trump, President Joe Biden failed to recognize how quickly things were deteriorating and failed to plan for the worst possible outcome, which is what happened -- and in some ways still is happening. As Packer reports:

"Administration officials told me that no one could have anticipated how quickly Kabul would fall. This is true, and it goes for both Afghans and Americans. But the failure to plan for a worst-case scenario while there was time, during the spring and early summer, as Afghanistan began to collapse, led directly to the fatal chaos in August. The Taliban gave every indication of wanting to cooperate with the American withdrawal, partly because it hoped for a continued diplomatic presence. 'They’re still asking us today, "Why did you leave? ”' a senior official told me. But the administration never tried to negotiate a better way out with the Taliban, didn’t establish green zones in Kabul and other cities with airfields. Instead, the evacuation came down to 10 days and one runway."

And what was the result? Thousands of vulnerable people -- who had worked with and for the American military in Afghanistan -- failed to get out and even today are hiding out in their own country fearing Taliban reprisals. Beyond that, thousands of Afghan refugees are coming to cities across the U.S., including Kansas City. Here, my congregation is partnering with Temple Israel of Greater Kansas City to house such refugees under the auspices of Jewish Vocational Services. (The photo above left shows a collection room for furniture and other materials in the basement of our church.) We're happy to do that, but the chaos at the end of the war in Afghanistan means we're welcoming traumatized people who may well struggle to find their sea legs here. (The photo at right shows us moving furniture into a duplex for such a family.) 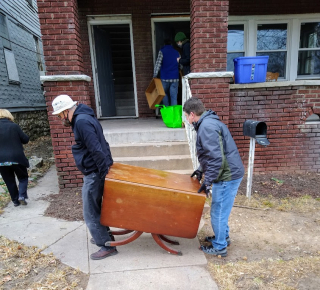 Why would religious congregations get engaged in this work? Because we are acting on foundational beliefs in the ultimate value of every single human being, as our Christian and Jewish religions teach us. That is a core belief of Islam, too, though radicals such as the Taliban, al-Qaida, ISIS and other splinter groups have blasted it to smithereens.

But if every person is of inestimable value, an American woman (involved in the final evacuation of Afghans) whom Packer quotes at the end of his story asks the right questions:

“'Afghanistan keeps descending into hell, and what are people like us supposed to do?' she asked. 'Are we supposed to leave these people who helped Americans, including people we served with personally, behind? I’m a very idealistic person in some ways, and I understand we can’t save everyone, and there are crises everywhere. But there was a 20-year war, and that changed a lot of people here. A lot of people served and went there. Our policy, our money, went there. Do we just abandon the people? I don’t think that’s who we are as a country. I don’t think that’s who we should be as a country.'”

If we judge simply by actions alone, that may not be who we are as a country but it's clearly who our government has been throughout this long war. And, in the end, we the people are responsible for the people we select to form our government. We have some repenting to do and then we must commit to chose leaders who won't act against our core values.

A PRIMER ON CHRISTIAN NATIONALISM'S HISTORY

Religion scholar and writer Mark Silk has just released the first in a series of columns tracing the history of how Christian nationalism grew in the U.S. It's a helpful bit of history that may help us see how we got here and what now we can do, if anything, about this awkward distortion of the Christian faith. I wrote about Christian nationalism most recently here. (Silk is professor of Religion in Public Life at Trinity College in Hartford, Conn., and director of the college's Leonard E. Greenberg Center for the Study of Religion in Public Life. He is a contributing editor of the Religion News Service.)

P.S.: And speaking of Muslim-Christian relations, as I pretty much was doing in the lead piece above, please know that the Dialogue Institute of Kansas City and the related Raindrop Foundation are organizing the 16th Annual Friendship Gathering at 6:30 p.m. on March 17. You can read more about that and sign up to attend at this link.