A detailed report on 'Christian nationalism' is published

It's been pretty obvious to anyone paying even semi-close attention that many of the Jan. 6, 2021, insurrectionists were marinated in Christian nationalism. 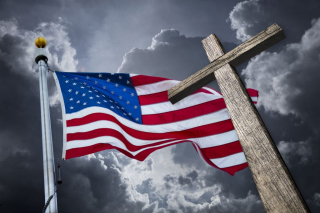 But now there's a detailed new report that puts a lot of flesh on those bones. This RNS story describes the report's origins and contents.

That story reports this: "Christian nationalism was used to 'bolster, justify and intensify the January 6 attack on the Capitol,' said Amanda Tyler, head of the Baptist Joint Committee for Religious Liberty, which sponsored the report along with the Freedom From Religion Foundation. Tyler’s group is behind an initiative called Christians Against Christian Nationalism.

"The organizations touted the report as 'the most comprehensive account to date of Christian nationalism and its role in the January 6 insurrection,' compiled using 'videos, statements, and images from the attack and its precursor events.'”

Part of what was visible at the storming of the Capitol building on Jan. 6 is cited in the RNS story: "flags with superimposed American flags over Christian symbols; 'An Appeal to Heaven' banners; prayers recited by members of the extremist group Proud Boys shortly before the attack or by others as they stormed the Capitol" and more.

Which means, of course, that Christian nationalism is in severe tension with the U.S. Constitution and its guarantee of religious freedom.

You can read the whole report for yourself. It's 66 pages long, so you might want to take a long lunch hour to do that.

There are, as you might expect, lots of reasons why Christian nationalism exists as a distortion of Christianity itself. As this report from Religion Dispatches notes, claims of biblical "inerrancy" are part of that picture.

The piece describes inerrancy this way: "Evangelicals who identify as inerrantists consider their Bible to be without error in all of its correctly interpreted, actual claims."

Or as the 1978 "Chicago Statement on Biblical Inerrancy" puts it, "We affirm that Scripture in its entirety is inerrant, being free from all falsehood, fraud, or deceit. We deny that Biblical infallibility and inerrancy are limited to spiritual, religious, or
redemptive themes, exclusive of assertions in the fields of history and science. We further deny that scientific hypotheses about earth history may properly be used to overturn the teaching of Scripture on creation and the flood."

It's a two-dimensional approach to a multi-dimensional book of sacred writings produced by dozens of writers over hundreds and hundreds and hundreds of years. Inerrantists tend to miss the poetry, the mythical aspects, the broader picture that the writers -- who are almost never writing what we think of today as accurate history -- are trying to convey. As some members of my congregation put it: You can take the Bible literally or you can take it seriously, but you can't do both.

The Religion Dispatches article asserts this: "It’s important not to. . .act like only the Civil Rights activists were activists. White conservative Christians were likewise racial activists, and biblical infallibility was there on the front lines with them. It did important rhetorical work: erasing their complicity in a brutal regime while transforming them into ‘just faithful Christians speaking hard truths about the Bible’ against Christians who failed to uphold its authority."

Christian nationalism has, as I say, many roots. But the important thing to remember about it is that it not only distorts Christianity, it distorts true patriotism, which often requires patriots to criticize what the government is doing in their name. But we can't work against it if we don't know what it is or how it grows. So read and learn.

One of the places (though not the only one) within Christianity from which to recruit people susceptible to Christian nationalism is the evangelical branch of the faith. But as columnist David Brooks of The New York Times recently reported, that evangelical world is in turmoil and is losing much of the younger generation.

"The turmoil in evangelicalism," Brooks noted, "has not just ruptured relationships; it’s dissolving the structures of many evangelical institutions. Many families, churches, parachurch organizations and even denominations are coming apart."

Clearly the religious world -- especially American Christianity -- is in traumatic flux. Which also means that Christian nationalism is unstable at its core. Watch this space.

IS THE MIDDLE GROUND ALWAYS THE RIGHT PLACE?

Pope Francis, a wise and thoughtful man, is urging the church to be careful about changing the rules on priestly celibacy and the male priesthood. In many situations, such a middle way is both appropriate and effective. But it also can be a tool of resistance to needed change. The Catholic priesthood is shrinking for many reasons. If a married priesthood (early in church history there were married priests) can help, why take the possibility off the table? And in other church crises, such as the sexual abuse scandal involving priests and the bishops who protected them, there should be no middle ground. That would not protect the children, which is by far a more important task than protecting the church.

P.S.: Here is an example of a pastor whose words and actions dishonor the core of Christianity and drive people away from religion in general. Sigh.