Home Archives Profile
Is Christianity at the foundations of racism?
Are people who chose pets over children just selfish? The pope thinks so.

The continuing threat of Christian nationalism

Even on Jan. 6, 2021, I knew that in some strange way religion was part of the story of the bloody insurrection at the nation's Capitol building. 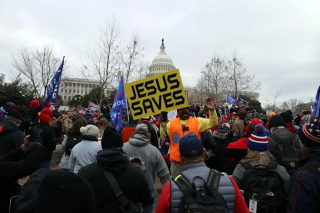 Anyone watching the rioting mobs on TV could see lots of signs mentioning Jesus plus various Christian banners, flags and crosses.

But it has taken time to piece together the central role that white Christian nationalism played in the effort to overturn the election of Joe Biden and steal it for Donald Trump.

I'm linking you today to two articles that can help all of us see more clearly what happened a year-plus ago and why we're far from done with the religious impulse that nearly broke our democratic system.

And this piece from Religion News Service helps us understand that what happened on Jan. 6  was horrifying, but it "is not the only way Christian nationalism jeopardizes our democracy."

As Samuel L. Perry, an associate professor of sociology at the University of Oklahoma, writes in that commentary, "Christian nationalist ideology — particularly when it is held by white Americans — is fundamentally anti-democratic because its goal isn’t 'government of the people, by the people, and for the people.' Its goal is power. Specifically, power for 'true Americans like us,' Christians in an almost ethnic sense, those who belong — the worthy. Stemming from this, the most salient threat white Christian nationalism poses to democracy is that it seeks to undermine the very foundation of democracy itself: voting."

Perry (who, by the way, wrote both of the commentaries to which I've linked you today) has taken us back to a 1980 conference at which "Paul Weyrich, co-founder of the Moral Majority, spoke about electoral strategy to Christian right leaders including Tim LaHaye, Phyllis Schlafly, Pat Robertson, Jerry Falwell Sr. and then-presidential candidate Ronald Reagan."

Here's what Weyrich had to say then: “Many of our Christians have what I call the goo-goo syndrome. Good government. They want everybody to vote. I don’t want everybody to vote. Elections are not won by a majority of people. They never have been from the beginning of our country and they are not now. As a matter of fact our leverage in the elections quite candidly goes up as the voting populace goes down.”

We should have been paying better attention to those chilling words.

So are all people of faith susceptible to such nonsense? No. But my guess is that Christians who prefer monochromatic answers to questions and issues -- either black or white, never gray -- tend to simplify this complex world so dramatically that they open themselves up to knaves offering simple answers -- answers like "Stop the Steal," a slogan that makes much more sense coming out of the mouths of Biden supporters and aimed at Trumpers than the other way around.

The Christian nationalist movement is a stain on Christianity. But it also injures religion in general because it tends to leave the impression that all or most people of faith are like the nationalists in their simplistic and often erroneous conclusions about faith, politics and life in general.

Another voice speaking out about Christian nationalism is Serene Jones, president of Union Theological Seminary. In this piece, she writes: "The idea that insurrectionists terrorizing the Capitol would claim the moral force of God is horrifying. The actions of those rioters were the furthest thing from the values of compassion and love that I’ve taken from the teachings of Jesus."

An aspect of Christian nationalism that often gets overlooked is how Native Americans have experienced it. This RNS piece goes into some interesting detail about that, especially as it relates to the Doctrine of Discovery.

And this article from The Forward describes how a social media operation called Gab weaves Christianity "into the conspiracy theories that populate" such sites.

All of which makes me wonder where we, as a nation, will be next Jan. 6. I'd like to tell you I'm optimistic that we'll fix things. But ask me then.

(The photo here today accompanied the Yahoo News article to which I've linked you.)

HERE'S A MODEL FOR OTHER FAITH COMMUNITIES

Here is a story about a Milwaukee church that sounds like the kind of faith community the nation could use more of. It goes out of its way to welcome international students, refugees and others. As the story notes, the church is "a bit of an outlier these days, a place where refugees, immigrants and international students are welcome at a time when American evangelicals are increasingly suspicious of newcomers to the United States." I wonder where that suspicion comes from. Hmmmm.

P.S.: Healthcare workers, as you surely know, have been on the front lines of the wars against Covid-19, with all its miserable variants. In response, some thoughtful faith leaders have produced a lovely book called Prayers and Blessings for Healthcare Workers, edited by Mandy Mizelle. It's an interfaith collection of prayers, blessings and poems. If you've never said thank you to hospital or hospice chaplains -- and other workers in the healthcare field -- a copy of this book would be a great way to do that.

ANOTHER P.S.: As an added bonus today, because it's at least somewhat related to the main topic above, I'm linking you here to a long, long and really helpful piece about how to avoid online racism. It's full of good ideas and interesting statistics. And it's written in an engaging and believable way, even if you find yourself disagreeing with some of what the author has to say. I hope you'll take a look.

A FINAL P.S.: If you missed my column yesterday in The Kansas City Star about the need to close the prison at Guantanamo, you will find it here.