Do Christian ethics have a place in a post-Christian world?

Christmas, as many of you know, doesn't end at the tick of the last second of Dec. 25 each year. In fact, Dec. 25 marks the first day of what's called the 12 days of Christmas. And in some Christian traditions, the Christmas season continues until Epiphany, which celebrates the arrival of the magi, or three wise men, as described in the second chapter of the gospel of Matthew. 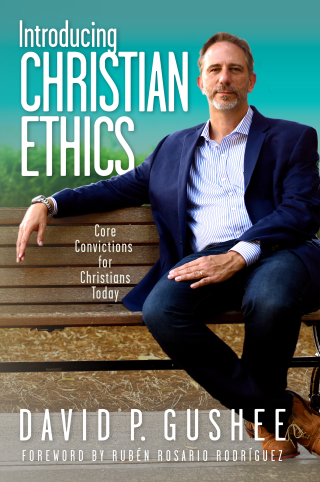 So because it's still Christmas, I'm going to introduce you today to a forthcoming book (it will be available for ordering on Jan. 11 and will be published in February) that speaks about how followers of the child born on Christmas are to be living today in light of his birth, life, death and resurrection.

It's called Introducing Christian Ethics: Core Convictions for Christians Today, by David P. Gushee, one of the best-known Christian ethicists. Here is a short YouTube introduction to it.

It's a challenging book because it takes Jesus seriously and it takes seriously what it means to be a Christ follower. But it also raises questions that even non-Christians would do well to ponder as together we face a wounded world in need of relief and redemption.

I had a recent phone conversation with the author. Here's a transcript of that, edited for length and clarity.

Bill Tammeus: If, as many say, we are living in a post-Christian world, is there a need any longer for a book on Christian ethics? And if there is a need, what is it?

David Gushee: I think we are living in a post-Christian-dominated world. And I think the polling is very clear that Christianity is fading in the people of the United States and other places. But there’s still more than two billion people who profess to be followers of Jesus, so this book is guidance for them. So as long as there are Christian people anywhere, there will always be a need for thinking about how we are to live.

BT: You write that "The One Big Question" in the moral arena is “How should I/we live?” What does a Christian ethics approach to that question offer people that it can’t find in other faith traditions?

DG: The centrality of Jesus is at the heart of answering the question of how we should live. Other faith traditions either do not have Jesus or do not center Jesus in the way that Christian ethics does. One of the blessings of the Christian moral tradition is that we have this compelling person with a lot of information about him — how he lived and what he said — at the center of our tradition. So ethics for Christians has never been about only principles or rules or goals. It’s about looking at and imitating the person Jesus Christ.

BT: You mention in the book caring for your 90-year-old father (who died about a year ago). How does that personal involvement in the care of another shape your understanding of Christian ethics?

DG: I began writing this book before he died and finished it after he died. It definitely affects the chapter on end-of-life decision making. But this whole book has a unique feature that I’ve never seen in an ethics book before. It has a life-cycle approach. I think about how moral issues present themselves across the life cycle beginning with children. So I arrange the presentation of the other moral issues around the theme of when kids begin to encounter these issues and what value could Christian moral tradition offer. So it begins with creation care. And the book ends with the end-of-life issues we face. I believe that Christian ethics are enriched by very serious reflection on our personal experience, and, in fact, that reflection is indispensable to good Christian ethics.

BT: Sort of on the other end of that, if Christian ethics were widely used in the way that you wish they were, what difference would that make in our economy, in our approach to the environment and in our attitudes about race?

DG: I have in the book a chapter on economics ethics in which I exegete the parable of the unjust manager (Luke 16). I’m trying to get at the structure and crookedness and injustice of most economic systems whether in Jesus’ time or our own. Jesus appears to be looking at the economy from the perspective of the dispossessed. It means an awareness of the corruption in all economic systems and a desire to live differently to resist that corruption and not make an idol out of money.

As for creation care, we need as many people on this planet as possible who love God’s creation and who are committed to caring for it. We do not have enough right now. The Christian tradition needs to join with other traditions in encouraging a critical mass of people who understand the value of creation, its eco-systems and other creatures.

On race, there is no place in the Christian faith for viewing one group of people as better than or less than other people. That should be ruled out by the example of Jesus. But racism has been woven into the Christian culture for a lot of complicated historical reasons. It’s time for us to repent of that and treat everyone with dignity, justice and love. Part of what Christian ethics has to do is to tease out what is of Christ and what is of culture and be ready to challenge anything that is of culture. 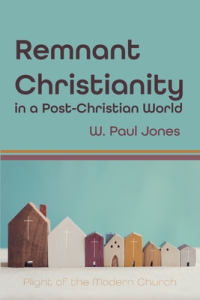 BT: You write that “I once hoped for a world transformed. Chastened, today I mainly hope for the formation of communities of Christ-followers who will live in the way of Jesus regardless of the direction of world history.” I’m struck by how similar is the hope of Fr. W. Paul Jones, as he expresses it in his new book Remnant Christianity in a Post-Christian World. Paul thinks the only hope now is for small remnant Christian communities to gather and live out authentic Christianity so they’ll be ready to teach it to the world again if and when the world ever abandons its current idols because they have proven to be empty. Is that also what you’re suggesting?

DG: We are falling apart. It feels like we built up this civilization here but are falling apart under the impact of social decay and Covid and so on. What must be discovered now is how the kingdom of God should be understood in Christian ethics. I have a chapter that’s about that. In an earlier book I had a more optimistic, social-gospel type hope that Christians working with other people of goodwill could bring about constructive social transformation in every area of life which in some way or other would bring major advances in the kingdom of God. But I’ve learned over a 30-year career that such major victories are very hard to find. And overall the mood here at the end of 2021 is more sober than that.

So what I really want to see is Christians who have their moral wits about them because they are deeply studying and attempting to follow Jesus and this is going to make them different from people who are fundamentally disoriented morally because they don’t know what to believe about anything right now — as well as Christians who are so swept up in a certain kind of ideological current that they are thinking more like politicos and less like followers of Jesus. I don’t think only Christians, even remnant Christians that I’m talking about, are going to be part of the solution to a better world but I do think that is our responsibility to the world.

BT: Your summary of the Christian story is brief but clear. Can the idea of Christian ethics be meaningful to people who either don’t believe that story or who now have replaced it with other stories?

DG: Christian ethics is not just rooted in the example of Jesus, but Jesus tells a certain kind of story and that story has gotten imbedded into the way Christians look at the world. It’s a story of a good world made by a good God damaged by human sin, redeemed in successive waves of covenants by God, culminating in Christ, ultimately to be consummated when he returns. So that’s a particular story. It’s a narrative. A lot of people don’t buy that narrative anymore. Even for some Christians, that narrative is not at the center of how they look at the world. But I do think that the ethical teachings of the Christian faith have a quality and significance to them worth considering regardless of whether people buy that story. So I would commend my book to anyone interested in the question of how they should live.

BT: Near the end of your book, you write that “following Jesus is about far more than the knowledge of ethics or any other discipline. It is about keeping our hearts free of any idol that would displace Jesus Christ as Lord.” My reading of the world is that it’s full of exactly such idols. Can Christian ethics help to show them for what they are and make them powerless?

DG: I think this is the human condition. If you want to talk about somewhat of a pessimistic vision, my wife said I should end the book with something more positive than why following Jesus is so hard. It is a hard word, but it’s a truthful word. Bracket off the people who don’t want to follow Jesus, who don’t care. Now you go to the people who say they want to follow Jesus. And there he is, available in worship and tradition and scripture and church, but our eyes get bedazzled by other gods. We could make a list of them: Ideology, money, power, self-interest whatever it might be.

My vision is that there are lots of people who say they want to follow Jesus who can be weaned off these idols if they know what they’re dealing with and if they’re properly instructed in community. This involves the strengthening of the church as a community, not just a place where people go but a community of formation that helps us keep our eyes on the real Jesus we meet in the gospel. It’s hard work. That’s why I believe it’s always going to be a minority experience. I hope my book will be one little help that people can turn to so they can learn how to follow Jesus and not idols instead.

The death a few days ago of Archbishop Desmond Tutu gives all of us an opportunity to learn about Ubuntu Theology, which this great man promoted. As the article from "The Conversation," to which I just linked you, says, Ubuntu is "the southern African (specifically, Nguni) word for humanness that is often used to encapsulate sub-Saharan moral ideals." One way I've heard it put is this: "I am because you are." Or, as the Conversation piece has it, "A person is a person through other persons." Ubuntu suggests that when one member of our family or our group is sick, we're all unwell. In other words, it's the difference between a commitment to rugged individualism and a commitment to the common good. There is, of course, some room for both, but a radically individual-focused society eventually eats its own seed corn and people starve. Tutu was a remarkable shining light at a time of bleak darkness. We need more like him today.