Home Archives Profile
When people in uniform get drawn into extremism
Will American Christianity just disappear or can it be saved?

How women are overcoming religion's bigotry against them

Next weekend, as Christians around the world celebrate Christmas, considerable attention will be paid to a woman who, in effect, made Christmas possible -- Mary, the mother of Jesus. 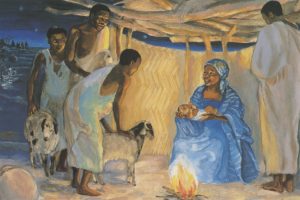 In the birth narrative in the gospel of Luke, the angel Gabriel appears to young Mary, engaged but not yet married to a man named Joseph, and tells her that she is to have a baby who "will be called God's Son."

Mary, questioning how in the world such a thing could happen "since I haven't had sexual relations with a man," nonetheless eventually says this to the angel: "I am the Lord's servant. Let it be with me just as you have said."

So she had a choice and she chose to give birth.

Since then the church has honored Mary in various ways, though perhaps the Catholic Church has led the way in this regard. But all parts of the church have at least paid lip service to the idea of women having choices about their lives. And yet even today vast stretches of world religions are patriarchal. In some cases women are not allowed to be ordained as clergy. In other cases, it's even worse. They are told to shut up in church and listen to the men -- even as some of those men hypocritically say words of praise for Mary.

But over the last 75 or 100 years, women increasingly have gained stature in institutional religion. My Presbyterian denomination, for instance, ordained its first woman pastor, the Rev. Margaret Towner, in 1956. (Marg, by the way, is still active in church affairs in Florida.) Twenty years later the Episcopal Church began to ordain women to the priesthood.

But it's been a slow process, and women have had to battle for every inch of progress to try to crack the stained-glass ceiling.

Recently, the Associated Press, Religion News Service and The Conversation have produced a series of stories describing some of that history and some recent developments. You can find all of them at this RNS home page.

Here, for instance, is a story about how Muslim women have been working hard to find leadership positions in modern Islam. (By the way, when the Prophet Muhammad introduced Islam to the world, his vision of it was quite liberating for women. But as the religion moved from the Arabian peninsula into areas even more dominated by patriarchal cultures, those cultures bent Islam's original vision of women to their subservient vision of women. Only recently have many Muslim women begun to overcome that sad history. But there still is a long way to go, as we know from the Taliban's recent takeover of Afghanistan.)

And here is a story about the most powerful woman at the Vatican and why she's optimistic about women achieving gender equality in the Catholic Church.

Next is this story about the various ways women in historically Black churches are finding their way into leadership positions.

And here is a story about how women in the Southern Baptist Convention are struggling to find ways to be heard and to lead.

Finally, here is a story about other women in the Catholic Church who, barred from becoming priests, are finding other positions of leadership in the church.

One of the creation stories in Genesis makes clear what God's intentions were about the role and status of women and men: "God created humanity in God's own image, in the divine image God created them, male and female God created them."

So both were created in the image of God. And nowhere in scripture do you find this addition to that story: "but men were thus created a little more in God's image than women."

So as Christians and others mark Christmas this year and praise Mother Mary (by the way, the Qur'an contains more about her than does the New Testament), it's a good time to measure how close religion is to treating males and females with equality and equity. And to fix those many instances in which religion continues to fail at that.

(The art displayed here today came from this site.)

IT WAS HUMP DAY IN BONNER SPRINGS

Maybe the silliness of reading Bible stories as if they're literal history is part of what leads to the additional silliness of having live camels in Nativity Scenes each year at Christmas. That silliness often amounts to mistreatment of animals, to say nothing of what can happen when one escapes, as a camel did the other day in suburban Bonner Springs, Kan., west of Kansas City. In fact, that camel traveled around on its own for a few days before being recaptured. If you're going to use live animals in Manger Scenes, know what you're doing and treat them well. Better yet, use stuffed animals and allow people to use their imaginations, which often produce more interesting scenes than does reality.

P.S.: My latest Flatland column -- about an artist who grew up Muslim, fell in love with Jesus, makes Christ-centered art but who today is a member of no institutional religion -- now is online here.