When people in uniform get drawn into extremism 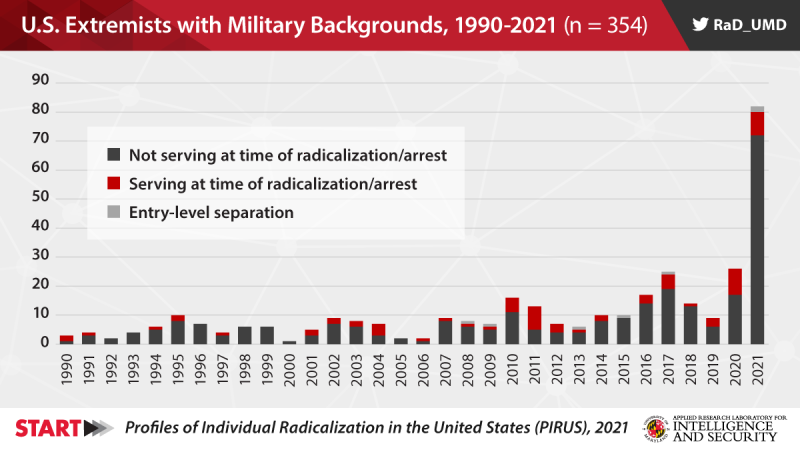 One recent evening I was talking over dinner with a friend who serves in the military and both of us were commenting on the sad reality that quite a few military veterans and former law enforcement officers (and no doubt some active ones) get drawn into extremist groups, like white nationalists.

Serendipitously, soon after that conversation, I came across this article from "Government Executive" about that very problem. And because I spend a couple of chapters in my most recent book, Love, Loss and Endurance, exploring how people get sucked into radicalism and what we can do about it, I found the piece helpful and informative. And hope you will, too.

Military veterans, the piece reports, "account for 15 percent of the people charged so far in the Jan. 6 attack on the U.S. Capitol — and. . .those charges figure heavily in the 350 percent increase in extremist-related crimes committed by veterans in the past decade, one terrorism expert said."

The numbers are disturbing and distressing. As the piece notes, "Since 1990 through the first nine months of 2021, at least 424 U.S. veterans 'committed criminal acts that were motivated by their political, economic, social or religious goals,' said a fact sheet released in October by the National Consortium for the Study of Terrorism and Responses to Terrorism, an academic effort led by the University of Maryland. That includes 99 veterans who have been charged with crimes related to the breach of the Capitol on Jan. 6."

I didn't know this, but it turns out that American University operates what it calls a Polarization and Extremism Research & Innovation Lab.

Cynthia Miller-Idriss, who heads up that lab, is quoted this way: “We focus on the rhetorical strategies and narratives of persuasive tactics that extremist groups and propaganda use to try to recruit people. And then we design, in the lab, interventions that we test to see if we can interrupt those processes at the really early stage. It’s not even deradicalization or disengagement, but how do you prevent people from being persuaded by some of those extremist rhetorical strategies.”

As others quoted in the piece note, it's important that information about extremism and recruitment into radical groups be given to members of the military early in their training. Any institution -- such as the military, the police or even religious congregations -- develops its own internal culture. And if that culture is influenced by fact-free conspiracy thinking or radical ideas about race, for instance, members obviously are more likely to be drawn into extremism.

I recall classes in college in which we students were introduced to the concept of propaganda and how to recognize it. My memory is that this was part of history classes that looked at such horrors as the Holocaust and the anti-Jewish propaganda the Nazis used to persuade Germans that Jews were the problem in their country -- and around the world.

I hope -- but don't know -- that colleges (and other schools earlier) are teaching students to recognize propaganda and, well, lies, today. It's abundantly clear that many people have fallen for lies today, including the Big Lie promoted by Donald Trump that the last presidential election was stolen from him.

William Braniff, director of the National Consortium for the Study of Terrorism and Responses to Terrorism, is quoted this way in the article to which I've linked you: "(I)t's not just a numbers problem. This is a problem regarding American democracy. And it's a problem for which we have to put a preventative ecosystem in place now before the numbers do get more concerning.”

This concern about radicalism among Americans is not just an academic worry. As Barton Gellman of The Atlantic recently reported, the political extremism behind Trump's Big Lie hasn't died and is working hard to make sure that the political system produces the results it seeks in future elections. As he writes:

"If the plot succeeds, the ballots cast by American voters will not decide the presidency in 2024. Thousands of votes will be thrown away, or millions, to produce the required effect. The winner will be declared the loser. The loser will be certified president-elect.

"The prospect of this democratic collapse is not remote. People with the motive to make it happen are manufacturing the means. Given the opportunity, they will act. They are acting already." And Gellman is far from the only one noticing this. Near the end of his new book, Midnight in Washington, Rep. Adam Schiff (D-Calif.) writes that "Republican legislators all across the country. . .are preparing the battlefield for the struggle to overturn the next presidential election if it doesn't go their way, and should they regain majorities in Congress, they just might be successful."

The future of our democracy depends on something every world religious teaches: The importance of truth.

(The chart you see at the top of this post came from the University of Maryland and can be found at this site.)

In a new book by in-big-trouble Mark Meadows, Donald Trump's White House chief of staff, he writes that the manipulative idea to have Trump walk across the street to a church while holding a Bible for a photo op came from the president's daughter, Ivanka. Meadows writes that she wanted to “send a message to people of faith.” Message received: Trump understood precious little about the George Floyd demonstrations and has no idea what the Bible might have to say about treating all people as if they're children of God.

P.S.: If you're interested in giving any of my books as holiday gifts, they're all listed on my Amazon author's page here. I have a few autographed copies available, too. If you e-mail me at wtammeus@gmail.com I'll tell you how we can arrange to get you one (or more) of those.