Preparing to hear the core power of the Christmas story 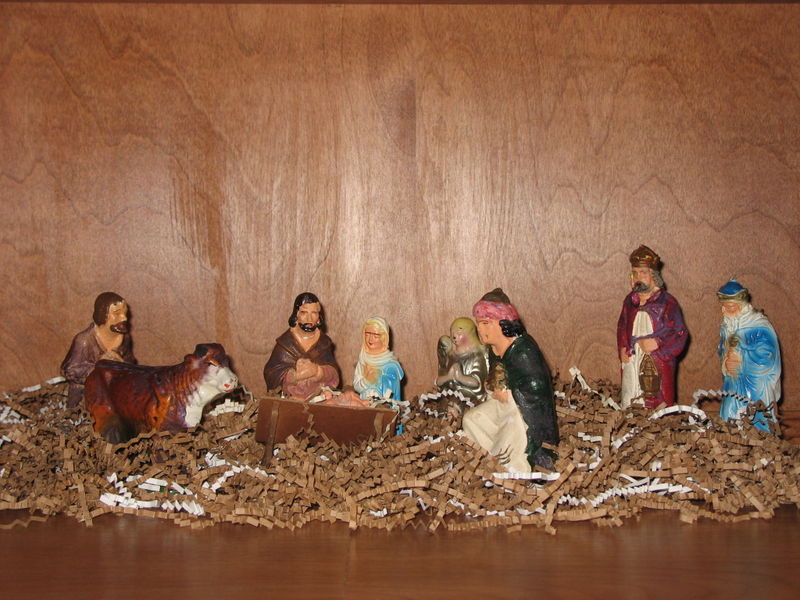 As Christians move through this season of Advent and its culmination, Christmas, it's a good time to remember that what gives the Bible its power, its resilience, its hold on the hearts and minds of so many people is not the literal history it may record. Rather, its power comes from the stories it tells and the ways it tells them.

So if we get bogged down in a literalistic argument over whether Jesus was really born in Bethlehem, as the Bible reports, or in Nazareth, as seems more likely to many scholars, we'll miss the point of his birth. If we argue about the science behind a huge star moving through the sky and pointing visitors to a stable, the beauty of the birth story begins to fade and we wind up looking like art critics who can't see the art because their interpretation of it prevents them from perceiving its reality -- or, more likely, its realities.

The brilliant 20th Century theologian, Paul Tillich (1886-1965), complained that people who lose an awareness of the depth and complexity of life and, instead, substitute for that depth what he called the limited "horizontal dimension," lose the power of the story, especially stories that religious texts tell.

"If the dimension of depth is lost," he wrote in a 1958 essay, "Invocation: The Lost Dimension in Religion," then "the symbols in which life in this dimension has expressed itself must also disappear. I am speaking of the great symbols of the historical religions of our Western world, of Judaism and Christianity.

"When it defended its great symbols, not as symbols, but as literal stories, it had already lost the battle (emphasis mine). In doing so the theologians (and today many religious laymen) helped to transfer the powerful expressions of the dimension of depth into objects or happenings on the horizontal plane. There the symbols lose their power and meaning and become an easy prey to physical, biological and historical attack.

"If the symbol of creation which points to the divine ground of everything is transferred to the horizontal plane, it becomes a story of events in a removed past for which there is no evidence, but which contradicts every piece of scientific evidence."

Shortly after making that excellent point, however, Tillich seems to use literalism himself to critique it by writing this: "If the symbols of the Saviour and the salvation through Him which point to the healing power in history and personal life are transferred to the horizontal plane, they become stories of a half-divine being coming from a heavenly place and returning to it."

What Tillich seems to refer to there is the great, mysterious, revealing, marvelous paradox that traditional Christianity insists that Jesus Christ was both fully human and fully divine. People who cling to what Tillich describes as a "half-divine being" miss that great mystery by literalizing the story, thus vastly diminishing it.

Tillich comes back to his main point a bit later in the essay when he writes this: "If the resurgence of religion would produce a new understanding of the symbols of the past and their relevance for our situation, instead of premature and deceptive answers, it would become a creative factor in our culture and a saving factor for many who live in estrangement, anxiety and despair."

Sort of on the opposite end of Tillich's desire to keep the symbolism in biblical stories as opposed to reading them literally, author and critic Susan Sontag (1933-2004) argues against interpretational readings in a 1964 essay, "Against Interpretation." She's mostly writing about art criticism, but she leaves her area of expertise just long enough to show that she gets it wrong when it comes to how to read sacred writ.

". . .Philo of Alexandria," she writes, "interpreted the literal historical narratives (emphasis mine) of the Hebrew Bible as spiritual paradigms. . .Interpretation thus presupposes a discrepancy between the clear meaning of the text and the demands of (later) readers. It seeks to resolve that discrepancy. The situation is that for some reason a text has become unacceptable; yet it cannot be discarded. Interpretation is a radical strategy for conserving an old text, which is thought too precious to repudiate, by revamping it. The interpreter, without actually erasing or rewriting the text, is altering it. But he can't admit to doing this." 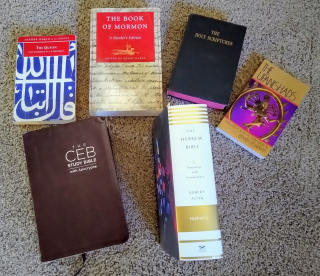 No, no. Careful interpretation of any sacred writing, whether the Bible, the Qu'ran or some other text, is not altering what's written (and what's written is only rarely a literal historical narrative). Rather, it's uncovering the power of the words that were written. It's helping readers find the light in the stories -- the light, not the literal accounting of an event in history -- though at times scripture does contain such history.

Another writer who considers literalism versus interpretive story is my friend Fr. W. Paul Jones, a Trappist monk who is resident director of the Hermitage Spiritual Retreat Center in Pittsburg, Mo. In Paul's new book (which I will write about here on the blog later in more detail), Remnant Christianity in a Post-Christian World, he writes that "the history of Christianity has proceeded broadly on two parallel tracks. On one level are the theologians and educated ecclesiastical authorities who, as intellectually fluent, tend to understand Scripture and doctrine more figuratively, using typology, analogy, metaphor and simile. On the other level is the domain populated by the majority of laity whose understanding remains more literalistic."

When the latter group of people don't understand sacred stories that use metaphor and analogy, they are likely to lose their bearings when science challenges the literalistic readings they've relied on. As Jones writes:

"If the church was shaken by the earth's eviction from its unique centrality in our solar system, how much more are believers being impacted by a universe of infinite space, in which the earth is likely to be far from alone in supporting life, with recent estimates being that there are at least 300 million potentially habitable planets in the Milky Way alone. Religious questions come flooding in. As one pundit put it, apparently Jesus will be kept quite busy making guest appearances. And if he doesn't visit them all, can he be regarded any longer as the unique and only Savior? Will we find Adams and Eves on each planet? If so, are there some couples who were able not to fall, making atonement and redemption irrelevant for them?"

Well, as Tillich noted, when religion "defended its great symbols, not as symbols, but as literal stories, it had already lost the battle."

So as those of us who are Christians hear the Christmas story again this year, I hope we will be caught up in the story's mystery, its power, its beauty, its ultimate meaning for our own context -- not in whether the so-called three wisemen were from Persia or somewhere else, not in whether history supports the idea of the Holy Family traveling to Bethlehem to be taxed, not in which particular field near Bethlehem the shepherds left to go see the child.

Let's, instead, take these stories seriously, not literally.

(Both Tillich's and Sontag's essays can be found in The Glorious American Essay, edited by Phillip Lopate. The photo above here today is of the Nativity Scene that my family used when I was a boy. Come back here to the blog on Christmas Day and I will tell you an old story about that Nativity Scene.)

WHO IS HELPING AFGHAN REFUGEES?

It's intriguing to read this RNS story about various synagogues working to help settle Afghan refugees in the U.S. The story is from North Carolina, but it's happening in KC, too. Indeed, my Presbyterian congregation has partnered with Temple Israel of Greater Kansas City to work with Jewish Vocational Services here to help refugees settle, and it now looks as if we soon may be assigned our first family from Afghanistan. We're still gathering things to help furnish living space for the family. If you want to help, email me at wtammeus@gmail.com and I'll tell you how.