From the birth of Jesus, was Christianity inevitable?

Over the last several hundred years, there have been various quests for the historical Jesus. 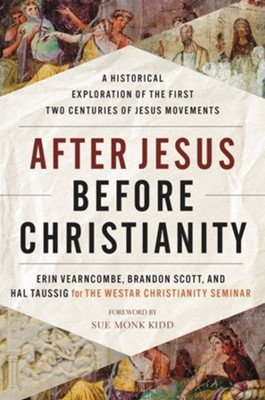 With decidedly mixed results. But it's been an intriguing enterprise that has provided considerable employment for scholars, theologians, authors and others.

A new book -- enlightening, frustrating and at-times repetitive -- is about a search not so much for the historical Jesus but, rather, for the historical Christianity. It's called After Jesus Before Christianity, and is written by scholars associated with the Westar Christianity Seminar, successor to the Jesus Seminar, which spent a lot of time trying to figure out which of the words attributed to Jesus in the New Testament he might actually have said (not many, the Seminar concluded).

The book's subtitle is: "A Historical Exploration of the First Two Centuries of Jesus Movements." That helps readers know where the several authors are going to focus.

It's an intriguing work, and almost a must-read for anyone interested in Christian history and, beyond that, how religions form and grow. The authors (Erin Vearncombe, Brandon Scott and Hal Taussig) say they've tried to write not a book for other scholars but one for everyone. Well, in that they have been only partly successful. There's still a lot of inside-baseball theology and history going on here, so this isn't the book you want a Christian church's confirmation class full of teenagers to dig into.

A primary goal of the book is to show "that Christianity was not the inevitable future," and the authors claim that "has been proved." Well, maybe not proved in the way we think of proof in scientific experiments, say, but it's been at least firmly asserted and that assertion has been backed with some interesting evidence.

The authors, despite that claim of proof, have been wise to assert this: "Most of our evidence is fragmentary or missing from the historical record. Much of the evidence we do have may be misleading, promoting only the voices of history's most powerful, those in a position to say whose voices are heard and whose should be silenced."

The interesting picture that emerges here is of two centuries of figuring out what the life, death and resurrection of Jesus meant, especially in an era dominated by the overwhelming violence embedded in the governing structures of the Roman Empire, which ruled the Holy Land.

How were people who were attracted to this Jewish carpenter from Nazareth supposed to understand his teachings of peace, love and compassion in the aftermath of his brutal death on a Roman cross? And what were those followers supposed to make of the voices of those Jesus followers who proclaimed that he had experienced resurrection and that somehow death had been conquered?

As the book rightly notes, there wasn't just one response to all of that. There were many and sometimes they were in conflict with one another.

The book was written by a committee, in effect. And the reader winds up crisscrossing some of the same information several times because one writer feels the need to cite it as much as the next writer who is making a somewhat different point. So both do.

Beyond that, the authors set up something of a straw man when they assert that the widely accepted story of the origin of Christianity starts this way: "Jesus came down from heaven to establish the Christian church."

No doubt there still are Christians who would put it that way, but that's a simplistic assertion that much of the Christian world has long since abandoned. Christians who don't read the Bible in a literalistic way recognize the various ways that assertion fails to reflect a much more complicated reality.

Well, look. The whole story of Christianity's roots in Judaism and in the cultural practices of the Middle East is complex. And as the authors correctly maintain, what Christianity -- the most populous religion in the world -- looks like today around the globe today was not foreseeable from the developments of the first two centuries.

This book will be far from the last word said about the quest for the historical Christianity, but it's a worthy addition especially because it may invite responses that would challenge it. Indeed, the authors invite just that. For that, good for them.

THE EFFORT TO KEEP BLACK CATHOLICS

The Catholic Church in the U.S. is struggling to keep its Black members, as this RNS story reports. Which is why some Black Catholics are participating in a four-part webinar series titled, “Black Catholics and the Millennial Gap.” One of the participants in that project is quoted as saying that for younger Black Americans, “racism is the root cause” of why they’re leaving the church. That should be a surprise to no one.