When moral and ethical values come under attack

World religions always have something to say about what constitutes good ethics and, related to that, about what moral authority looks like. 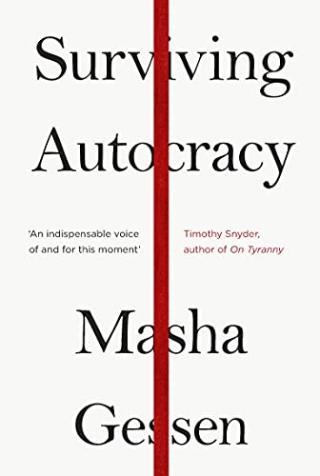 In both areas, one of the requirements is that people respect the essential humanity of others. Beyond that, one is required to work for the common good.

Such ideas apply not just to individual relations but also to the products of government and industry. Which is why you sometimes hear people say that a governmental budget is, in the end, a moral document if it reflects the solid moral values of the electorate.

I've been thinking about this because I just finished reading Masha Gessen's 2020 book Surviving Autocracy. In it, she writes this: "Autocratic power requires the degradation of moral authority -- not the capture of moral high ground, not the asserting of the right to judge good and evil, but the defeat of moral principles as such."

Gessen argues that a war on moral principles was unleashed by leaders of the former Soviet Union. And she adds this: "In the Russian language today, the entire vocabulary of principles and ideals has, after decades of abuse, been relegated to disuse."

In her book, written while Donald Trump was still president, she also makes the obvious point that in an autocratic way, he also fought against foundational moral principles, though even before Trump took office, she notes, "the language of ideals and principles had been fading from American political discourse too, giving way to the language of realism and action."

It's a small example, but Gessen notes that one way Trump tried to undercut moral values was to undercut some of the people who obviously held them. For instance: "In January 2017, he unleashed a Twitter fury against Congressman John Lewis, who vowed to boycott the inauguration. 'All talk, talk, talk -- no action or results. Sad!' tweeted the president-elect. He continued going after the civil rights icon long after Trump's usual Twitter attention span would have run out. Trump came across as clueless, as though he did not know who Lewis was, which district had elected him and, more important, what history he represented. But his instincts were guiding him into a confrontation that was hardly new."

She then notes this: "When Trump dismissed Lewis as 'all talk, talk, talk,' he was dismissing the value of moral politics in general, and in particular the basic conversation about right and wrong in which Lewis was engaging. In attacking Lewis, Trump lashed out not only against the legacy of the civil rights movement that Lewis represented but also the rhetorical history of moral protest."

For me, all of this is a reminder to listen to our elected leaders and other powerful people in our culture with our moral hearing aids plugged in. What are they saying or doing that contradicts good ethical and moral values? Are they working for the common good or merely for their own? Are there other voices calling out what's going wrong and, if so, how can I support them or add my voice to them?

And for people of faith: How can my faith community do a better job of raising moral questions about what is happening in the world? And how can that community better train members to use their prophetic voice to defend moral and ethical behavior?

AND NOW FOR SOMETHING COMPLETELY DIFFERENT

I don't get a lot of chances to write about Sikhs and Sikhism, though in 2019 I wrote this Flatland column about a new Sikh temple being built in Johnson County, Kansas. But today I want you to know about a Sikh man who now lives in Canada and whose traditional Punjabi folk dancing, called Bhangra, is making people around the world happy on social media. This RNS story about him is more proof that even though social media often is used for destructive purposes, it also can draw on religious traditions to make people feel good. You're welcome.

P.S.: "Israel Story," a podcast that bills itself as the Israeli version of "This American Life" on NPR, recently began its sixth season. If you're interested, you can find out more about it here.

ANOTHER P.S.: My latest Flatland column -- about the outrageous execution of an intellectually disabled man -- now is online here.