Home Archives Profile
Are Jews in the U.S. in increasing danger? Or not?
When moral and ethical values come under attack

Why there needs to be room for doubt in religion

Even before I wrote the book The Value of Doubt, published in 2016, I had been writing about the dangers of false certitude in religion. It's exactly what the 9/11 hijackers demonstrated. 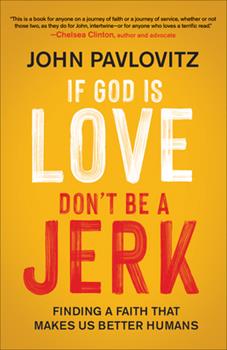 So I was especially pleased to read this RNS story about a new book that seems to be in harmony with the idea that black-and-white religious thinking can be dangerous.

The RNS piece includes an interview with John Pavlovitz, author of If God Is Love, Don't Be a Jerk: Finding a Faith that Makes Us Better Humans. It was published just a week ago.

I haven't had a chance to read the book yet, but I do like this quote from Pavlovitz in the RNS interview: "When certainty becomes kind of a moral virtue, that’s a really dangerous thing, because we all live in this space where there’s a tension between the things we’re sure of and the things we’re not quite sure of. It’s been my journey that it’s a beautiful thing when you can actually verbalize all of that. The heart of the book is if God is really God-sized, as we say God is, then God is OK with our vacillation and our doubt and our inconsistencies. So we should be, too."

Doubt, I argued in my book, can be -- and often is -- a road to a sustainable faith. But if you're not part of a faith community that allows and even encourages its members to ask the hard questions of faith and talk about doubts, you're probably never going to build a faith that can uphold you in good times and bad.

In fact, the last book I wrote, Love, Loss and Endurance: A 9/11 Story of Resilience and Hope in an Age of Anxiety, is in some ways a continuation of that idea in that it explores how people get sucked into faith that doesn't allow doubts and that can, in the end, lead to violent extremism.

Pavlovitz also identifies the problem with faith communities that are certain about everything and want no argument about anything: "The worst parts of organized religion leverage those places of fear and leverage our need for belonging. So many times people don’t move into their most authentic spirituality because they’re afraid of being rejected from the community they love so dearly. The love of a spiritual community is fierce and it’s profound — until you do or say something that places you on the periphery of that community."

Healthy faith communities have lots of peripheries as well as a rooted center that is sure enough of itself to allow questions, dissent, disagreement.

Pavlovitz puts it this way: ". . .we really should take the time to sit with the doubts and the questions and let them just do the work that only they can do. Because on the other side of that is the realization there is nothing to fear. There is a God who is always going to out-love us and out-forgive us and out-welcome us."

THE SORROWFUL SHAME OF MISSOURI

Speaking of doubt, the fact that Missouri Gov. Mike Parson had none when it came to whether to execute intellectually disabled death row inmate Ernest Johnson, despite pleas from Pope Francis and others, means that my state, acting on my behalf and the behalf of all its citizens, killed Johnson last night at the state prison in Bonne Terre. It's a dishonor that the state and the governor can never live down. It's simply appalling. It's proof again that it matters whom you elect.