In many ways, American culture has turned evil into a multi-million-dollar Halloween industry and, in the process, lost sight of the ways in which terrible religious ideas once led to witch hunts, witch trials and the execution of women for having been convicted of being witches. 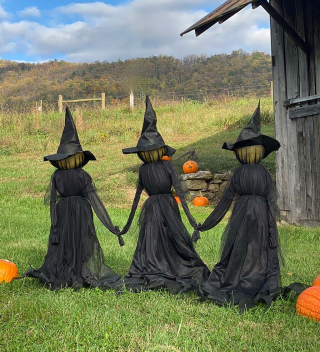 This piece from The Conversation explores that history by taking a look at a book written in 1486 by two Dominican friars, Johann Sprenger and Heinrich Kraemer. The book, Malleus Maleficarum, or Hammer of Witches, "helped convict some of the tens of thousands of people – almost all women – who were executed during the period. Its bloody legacy stretched to North America, with 25 supposed 'witches' killed in Salem, Massachusetts, in the late 1600s," writes Melissa Chim, who teaches at the General Theological Seminary in New York.

In many ways, witch trials seem preposterous today, in part because our culture has defanged the idea of witches by making fun of them on Halloween. And, indeed, that's progress.

But there still are many bad and/or dangerous religious ideas floating around in the world. And the many ways in which women still are viewed as somehow lesser creatures than men continue to create a society that is less than it could be.

Chim writes that the authors of the Hammer of Witches "present their guide in three parts. The first argues that witches do in fact exist, sorcery is heresy and not fearing witches’ power is itself an act of heresy. Part Two goes into graphic detail about witches’ sexual deviancy, with one chapter devoted to 'the Way whereby Witches copulate with those Devils known as Incubi.' An incubus was a male demon believed to have sex with sleeping women.

"It also describes witches’ ability to turn their victims into animals, and their violence against children. The third and final part gives guidelines on how to interrogate a witch, including through torture; get her to confess; and ultimately sentence her."

All of this centuries-old stuff about witches and witchcraft has almost nothing to do with the religion known today as Wicca, except that some of the terms -- like witchcraft -- are used in both.

But the ancient ideas about the supernatural and evil powers of some women and the need to make them second-class citizens at best haven't disappeared completely from the world. Just check out what the Taliban today thinks of females.

(The illustration here today came from this site.)

GHOSTS ARE ALL OVER THE BIBLE, SORT OF

OK, if I write about witches this Halloween weekend, as I have above, it seems only right to give ghosts some attention, too. This Beliefnet.com piece asks (and tries to answer) the question of what, if anything, the Bible has to say about ghosts. As the article note, "Just in the King James Version of the Bible, the word 'ghost' appears 108 times. However of these, the word is never used in the sense of a returning spirit of someone who has died." Plus, the New Testament does talk about a ghost Christians believe is very much alive -- the Holy Ghost. If you don't bother to read the article, I may come back and haunt you.