Here's how congregations can work against white supremacy

Just over a year ago, I wrote here about Robert P. Jones' book, White Too Long: The Legacy of White Supremacy in American Christianity. 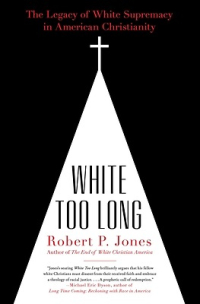 I found it a helpful read full of well-researched history.

Recently Jones wrote this column for Religion News Service, following up some ideas from that book. The column offers seven ideas for predominantly white Christian churches to understand their own racial history and to make changes where and when lingering ideas of white supremacy still can be found.

That process can begin just by walking around the outside and inside of the building that houses the congregation. As Jones writes, "In what ways does the physical embodiment of your church communicate whiteness? If you have stained-glass windows, do they depict a white Jesus or other biblical characters who are presented as white? During Advent and Christmas celebrations that include a nativity scene, are Mary, Joseph and Jesus white? What about the paintings and bulletin boards that adorn the walls — are the images of people all white? And who uses the church facilities during the week? If only predominately white groups meet there, why is that?"

What Jones is suggesting might be called an internal audit. The goal is for predominantly white churches to see themselves as others no doubt already see them. This is not to suggest that the congregation is full of dedicated bigots who would abandon ship if people of color tried to join the congregation. Rather, it's to suggest that it's often hard to see ourselves as others see us and that we may need some help with that. I've tried to do something similar in the last chapter of my own new book, Love, Loss and Endurance: A 9/11 Story of Resilience and Hope in an Age of Anxiety. I offer there some ideas for how individuals and congregations of any faith tradition can work to unplug extremism, especially the kind that leads to violence and especially the kind rooted in religion.

The white supremacy about which Jones writes is, of course, just one more kind of radicalism that infects not just our culture but also some of our faith communities. His suggested steps toward unplugging it and my suggested steps toward deactivating extremism generally can be used together in congregations.

LOOK IN THE STREETS TO FIND FAITHFUL YOUNG PEOPLE

Here's a follow-up to what I wrote above here: New studies suggest that if religious leaders today want to appeal to young people, they'd do well to look for them in street protests, such as in "BlackLivesMatter events, this RNS story says. The story says that an upcoming survey will report that "acts of protest are most popular among those who say they’re 'very religious' and 'very spiritual' as opposed to moderately, slightly or nonreligious/spiritual. About half (51%) of 'very religious' young people say they engage in acts of protest at least monthly, compared with 24% of those who are nonreligious." Now you know where to find spiritually engaged young people.

P.S.: A documentary called "Procession," about six Kansas City men who were abused by Catholic clergy, will open in limited theaters on Nov. 12 and start streaming on Netflix on Nov. 19, the date on which it's scheduled to open at the Screenland Armour theater in North Kansas City. You can read reviews about it here (scroll down to find it) and here. It looks fascinating and I plan to see it when I can.