Over the years, I have known some amazing members of the clergy -- honest, dedicated, wise, committed and pastoral. In fact, I've formed the belief that people who fit that description make up by far the majority of pastors, priests, imams, rabbis and other religious leaders. 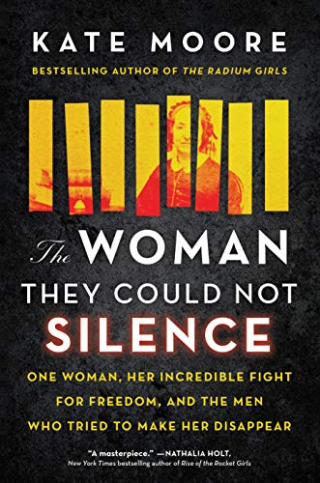 But not all. (In that way, the profession of clergy isn't so dissimilar from other professions, including journalism.)

When I've run across clergy who have been dishonest or more interested in their own honors than in honoring God, I've found it enormously disappointing, though that's perhaps because many of us tend to think that anyone ordained to ministry should (and probably does) hold to a higher moral standard than your average human being.

I thought about all of this the other day as I was reading a marvelous 2021 book, The Woman They Could Not Silence, by Kate Moore.

It's about a remarkable 19th Century woman named Elizabeth Packard, who was married to a Presbyterian pastor, Theophilus Packard of Manteno, Ill., south of Chicago. When Elizabeth began to challenge her husband's change of theology -- from New School to Old School Presbyterian thought -- he eventually declared her insane and had her committed to an insane asylum in Jacksonville, Ill. The book is about how she fought through that trauma and emerged as a great reformer on the behalf of the mentally ill and of women generally.

But the question of why Theophilus adjusted his theology (essentially from anti-slavery Presbyterians to pro-slavery or silent-on-the-subject Presbyterians) intrigued me, as it did the author of the book.

It turns out, Moore writes, that Theophilus "was trying to save himself." Meaning not his soul but his job.

"There was a reason," she writes," his church had recently flipped from New School to Old School doctrines. Openly, the switch had coincided with the church securing funding for its first permanent home. . .The money had come with strings attached: the church had to switch its creed." That demanded switch had come from one of America's richest people, Cyrus H. McCormick, who had donated $800 (today about $25,000), nearly half the cost of the church.

Beyond that, "Theophilus had a secret he'd been keeping from his wife. . .He was deeply in debt -- to the tune of $3,800 (about $118,000 today). It meant the threat of losing his job hung over him like a guillotine's blade. No matter Theophilus's true beliefs, he had to toe the line -- as meekly obedient as his wife was not. . .And it was essential to McCormick and his political plan (about avoiding a Civil War) that Theophilus did just that."

Quite a bit later in the book we learn this: "So Theophilus had lost his job. Despite his desperate efforts in 1860 to retain his position -- to the extent of abandoning his principles and silencing the wife who would not -- it had all been for nothing."

That was bad enough for Theophilus. But imagine that he'd kept his job and managed to pay off his debt. He'd still know in his heart that he was a fake and had caved into a profoundly immoral position on slavery to be able to do that.

There are, of course, such clergy people around today -- willing to sell out for bad reasons. And those of us active in faith communities would do well to remember that and to keep our eyes and ears open, especially when what's at stake is not money but the welfare of our children and grandchildren.

But let's also remember that the clergy includes many people with highly active moral compasses who are ready to call other clergy on their moral failings, given that such failings can, fair or not, reflect on all of them.

The wife of Theophilus, by contrast, was a moral giant. Read the book and you will celebrate her.

AN ALL-FEMALE SLATE IS ELECTED

I wonder what Elizabeth Packard, a champion of protecting rights for women, would think of the news that the National Council of Churches just elected an all-female slate of leaders. And all but one of those leaders is a person of color. I'm not sure it's a good idea for such organizations to be run by people all of one sex, but history shows us the catastrophes that can happen (I'm thinking of the sex abuse scandal in the Catholic Church) when only males are in charge.

P.S.: KCUR.org has published my remembrance of a member of the clergy who never abandoned clear standards of morality, Lama Chuck Stanford, founder of the Rime Buddhist Center.