Home Archives Profile
Learning from our costly errors in fighting terrorism
Two decades later, this violent world has yet to be repaired

A New Testament for people who understand Native American spirituality

The original manuscripts that eventually, over centuries, became the Bible -- the Tanakh (or Hebrew scriptures), the New Testament and, for some, the Apocrypha -- were written in Hebrew and Greek with a bit of Aramaic here and there. 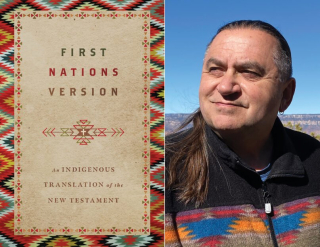 But that's as of a year ago. Now we have yet another New Testament translation. This one is done in English but it draws on Native American language and thought to make it more understandable to Indigenous readers.

As the RNS story to which I've just linked you reports, Terry Wildman, lead translator and project manager, "hopes the new translation published Tuesday (Aug. 31) by InterVarsity Press, First Nations Version: An Indigenous Translation of the New Testament, will help Christians and all Indigenous peoples read it in a fresh way. (Wildman is shown in this photo along with a photo of the cover of the new translation.)

The relationship between Native Americans and Christianity is, shall we say, complicated, given that many of the early Christian invaders had little use for the Indians (as they called them), who needed to be cleared from the land by hook or by crook to make way for the "manifest destiny" of white people.

So you can understand if some Indigenous people remain skeptical of the religion that led those invaders to commit various forms of genocide on their ancestors. And yet Christianity has taken root among many American Indians, and this new translation almost certainly will make it easier for them to understand the concepts contained in the New Testament's 27 books, or chapters.

For instance, the story notes this about the famous verse John 3:16: "In the First Nations Version, 'eternal life,' a concept unfamiliar in Native American cultures, becomes 'the life of the world to come that never fades away, full of beauty and harmony.' The Greek word 'cosmos,' usually translated in English as 'the world,' had to be reconsidered, too: It doesn’t mean the planet Earth but how the world works and how creation lives and functions together, said Wildman. . ."

Every single translation from the original Greek and Hebrew into English or any other language is an act of interpretation. So the First Nations Version is following in the footsteps of hundreds of translators over long centuries. The goal is to open up meaning to readers in ways they can grasp for themselves today and in ways that can connect to how the writers meant their words and how the original readers or hearers of those words would have understood them.

I suppose the surprise is that it has taken this long for this special First Nations version to appear. I look forward to reading it.

As we prepare to commemorate the 20th anniversary of the 9/11 terrorist attacks this week, the case of the 9/11 organizers continues in a military court at Guantanamo. In fact, the self-confessed 9/11 chief plotter, Khalid Sheikh Mohammed, appeared in that court yesterday for the first time since February 2020. The slowness of this military justice amounts to one painful stab at the hearts of 9/11 families after another. Beyond the five 9/11 planners on trial, other uncharged people are imprisoned at Gitmo, a clear violation of the Geneva Accords. President Joe Biden has promised to close Gitmo, and there's some evidence that his administration is moving in that direction, but every day Gitmo is open is another stain on the U.S. and on American values. As I note in my new book, Love, Loss and Endurance: A 9/11 Story of Resilience and Hope in an Age of Anxiety, the 9/11 terrorists caused my family and thousands of other families whose members were murdered that day trauma after trauma. It's way past time to end that.

P.S.: As some of you may know, there will be a performance in KC this Saturday of "The Great Divorce," by the great Christian apologist C.S. Lewis. As good timing would have it, the new issue of Christian History Magazine focuses on Lewis. And you can read the whole issue for free in this pdf.