Home Archives Profile
Two decades later, this violent world has yet to be repaired
What can we do to stop violent extremism in its many forms?

Will 'Religion on the Line' radio show continue? 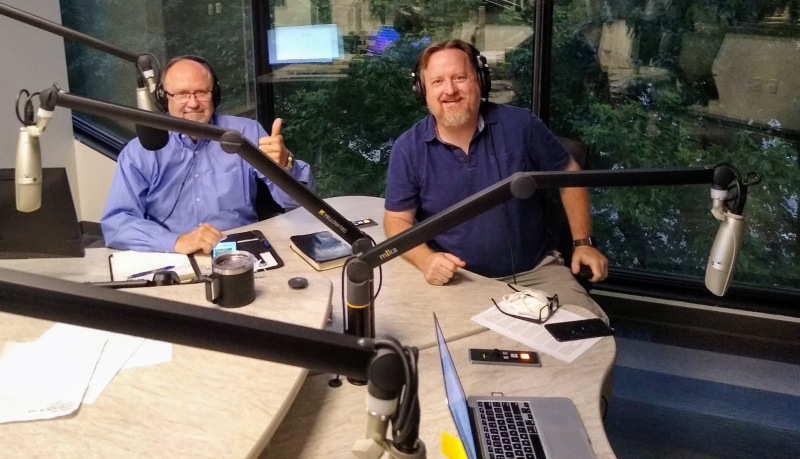 I got to be a guest this past Sunday morning on the long-running radio program called "Religion on the Line," which the Rev. Robert Lee Hill has hosted for nearly three decades, with some help from his friends, especially Michael Zedek, emeritus rabbi at Congregation B'nai Jehudah.

It turned out to be good timing to be a guest then because Hill had told me a few days earlier that this coming Sunday morning would be the final time the show will air -- at least on KCMO Radio -- and perhaps forever, if another station doesn't pick it up. But he told me when I arrived at the studio Sunday morning that the deadline for turning this call-in show into a dead line has been extended at least until mid-October. So stay tuned.

(The photo here today, which I took last Sunday morning at the studio in Corporate Woods, shows Hill, left, and Catholic Deacon Bill Scholl of the Archdiocese of Kansas City in Kansas. Scholl now is a regular on the show. Zedek participated in the discussion by phone that morning. The conversation Sunday was mostly about religious extremism and was based on my new book, Love, Loss and Endurance: A 9/11 Story of Resilience and Hope in an Age of Anxiety.)

A few of years ago, Flatland did this piece about this interesting radio show when the program was turning 25 years of age. Zedek has been on the show with Hill for almost all of the show's run, and is quoted in the Flatland piece this way: “Radio, because it is voice only, creates an extreme intimacy that is surprising in some ways.”

Indeed, that atmosphere of intimacy is required when exploring the eternal questions. Yes, there's a place for scholarly investigations into religious matters, such as translations of scripture and the history of how this or that religious tradition developed. But because religion deals with the interface between individuals and the cosmos and especially because it deals with the question of purpose, intimate discussion is vital.

And the "Religion on the Line" radio show has not all been about just one religion. As Hill notes, "We've been the interfaith voice for public discussion on an ongoing weekly basis for 28 and a half years."

If we've learned anything about religion in the last 20 years since the 9/11 terrorist attacks, it's what we already should have known, which is that sometimes religious ideas can be dangerous, a subject I wrote about here earlier this year. For that reason, among many others, we need opportunities to talk openly and honestly about religion.

And for that reason alone, I hope "Religion on the Line" will continue. And so do the loyal listeners of the 6 to 8 a.m. Sunday show.

A HISTORY OF DAMNING WOMEN TO HELL

Ancient religious texts and cultural teachings rooted in them often have led to views of women as literally damnable, as this piece from The Conversation makes clear. As we hear about and worry about how women in Afghanistan and how they will be treated now under the harsh, fundamentalist rule of the Taliban, it wouldn't hurt to know some of the history of how the other two Abrahamic faiths, Judaism and Christianity, have treated women across the ages and what we still don't get right.