Why is the Middle East such a mess? Here's an answer.

If you think problems in what today we call the Middle East (Do you know how it got named that?*) are so deeply embedded in history that they form a Gordian knot impossible to undo, you're not alone and you may not be wrong. But if a solution of some sort is to be found, knowing the history of the region is vital. (Just as U.S. leaders should have known more about the history of Afghanistan before spending 20 years and huge amounts of blood and treasure there.) 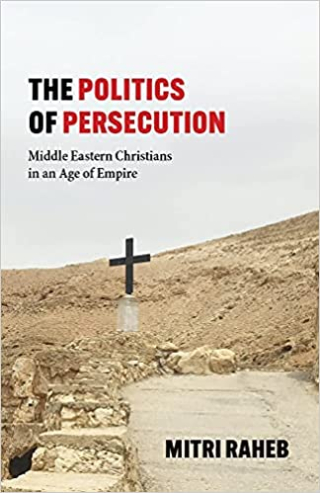 A new source for Middle East history is about to be published (this coming Wednesday): The Politics of Persecution: Middle Eastern Christians in an Age of Empire, by Mitri Raheb. (*There's an intriguing answer in this new book.)

In the end, you may or may not agree with some of his conclusions about why things happened and what to do about it now, but at a minimum there is revelatory history here that can give us the kind of perspective we need to get a better understanding of everything from the Israeli-Palestinian conflict to the Iraq war to the Ottoman Empire to colonialism and on and on.

And here's a summary from the book about why this matters:

The intentional focus of the book is on the fate of Christians in the area, and the news there isn't good.

"Without peace," Raheb writes, "it will be difficult to keep Christianity alive in the lands of its origin."

The reality, of course, is that Christians have been both the persecuted and the persecutors, as this book makes clear.

It has become a standard complaint among American Christians who identify themselves as evangelical or conservative that Christians are often victims of persecution, both at home and abroad. But the story is considerably more complicated than those who say that often are willing to acknowledge. Consider, for instance, Iraq. As Raheb writes:

"The largest wave of Christian emigration from Iraq was triggered by the American invasion of Iraq in 2003. Under the false pretext of nuclear weapons and smoking guns, the United States invaded Iraq and dismantled the Baath party of Iraq and the Iraqi military. This brought chaos to the country and paved the way for ISIS to take over. Over a million more Christians felt defenseless and fled Iraq to neighboring countries like Jordan, Lebanon and Syria, while many migrated to North America and Australia. . .The United States, which is now eager to defend persecuted Christians in the Middle East, actually brought about the biggest blow to one of the ancient Christian communities in the region through its sanctions and invasion."

To look at this history of persecution of people of faith -- especially Christians -- Raheb goes all the way back to the early days of the faith and especially to the way in which the Roman empire persecuted followers of Christ.

Then he focuses on the research that's been done at Dar al-Kalima University of Arts and Culture since 2006.

The various ways in which foreign Christian missionaries, especially from the U.S., influenced life, economics, politics, religion and more is a subject to which Raheb pays considerable attention. This still plays a role in Middle Eastern life today. That's especially true in light of people who identify as conservative Christians believe that the Second Coming of Christ can't happen until Jews, represented by the modern state of Israel, control the Temple Mount in Jerusalem, which Muslims now control.

Early Christian missionaries to the Middle East, Raheb says, "thought of themselves as superior in religion, race and culture to the other monotheistic religions as well as to the local churches."

If that surprises you, you've missed a fair amount of world history.

And if you've heard about but don't know much about the 1860 massacre of Christians by the Druze on Mount Lebanon, that history is recounted here in considerable detail.

Colonialism, too, plays a major role in this story, for as Raheb notes, "by the end of World War I, the entire Middle East and North Africa were fully under European control."

Well, there is a lot more packed into a 207-page book, and I won't take more time and space to get into it all. But this is important reading even, as I say, if you disagree with some of the author's conclusions, including his implied and direct criticisms of modern Israel.

ANOTHER TERRORIST GROUP TO KNOW

We may now add to the list of violent extremists getting lots of press in the U.S. and around the world the name of ISIS-K. Who is that? This RNS story describes its origins and its differences with the Taliban. And here is an explanation of the group from The Conversation. Across human history such radicals have plagued the world. We can't just give up and accept that they'll be here forever. We simply must find ways to stand against faith-based extremism. I devote the last two chapters of my new book to explaining some of the roots of extremism and what we can do to unplug it. I hope you'll join the effort to do just that.

P.S.: My latest Flatland column -- about a quiet place where you can ponder the eternal questions -- now is online here.