Home Archives Profile
Is this a scientific breakthrough that reveals who God is?
How China crushes Tibet and other followers of faith

The shape of Islam in the U.S. continues to change

The Muslim community in the U.S., almost 20 years after the 9/11 terrorist attacks, is older, wiser and different in several ways. 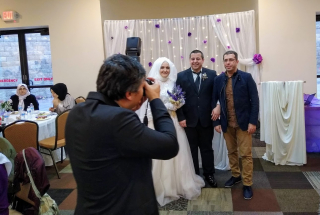 For instance, as this RNS story reports, mosques in the U.S. are becoming more "American," according to a report done for the Institute for Social Policy and Understanding based on a new survey of American mosques.

For instance, the story says that findings in the report suggest the "American mosque is reviving certain leadership positions for women in the mosque that, while common in the earliest days of Islam, have fallen out of practice." It then quotes the report itself this way:

“American mosque leaders lean toward an understanding of Islam that adheres to the foundational, textual sources of Islam (Qur’an and Sunnah) but are open to interpretations that look to the purposes of Islamic law (i.e., looking to the spirit and wisdom of the law) and modern circumstances.”

This new report got a round of applause from the Council on American Islamic Relations, which issued a press release that said, in part, "'As the American Muslim community grows more diverse, we are delighted to see more women are serving on mosque boards and mosque leaders encouraging civic engagement among Muslims,' said CAIR Executive Director Nihad Awad. “'We are pleased to be a co-sponsor of this important report that examines the diversity of mosques and activities in the United States.'”

As the Pew Research Center reported, "The share of mosques in which adult women account for more than a quarter of all attendees at the Friday Jumah prayer service grew between 2011 and 2020, according to the new study."

The report itself says that "The purpose of the US Mosque Survey is to conduct a scientific study that will generate accurate information about most aspects of the American mosque. The goal is to provide a detailed portrait of the American mosque to dispel misconceptions and to help mosque leaders and participants better understand their mosque, hopefully leading to improvements."

It took some time for researchers doing the report to get what they consider as accurate a count of American mosques as possible, but in the end they came up with 2,769, which is a 31 percent increase from the 2010 count.

As the report said, "Mosques are becoming more suburban as major declines occurred in the number of mosques located in towns/small cities and in downtown areas of large cities. Mosques in towns/small cities decreased from 20% in 2010 to 6% in 2020. The apparent cause is the dwindling population of Muslims in these towns/small cities due to the drying up of jobs in these areas and the moves of young adults, children of mosque founders and activists to large cities for education and jobs. In 2010, 17% of mosques were found in downtown areas, but in 2020 that figure is down to 6%. This decrease is most probably tied to the decrease of African American mosques and the general move of mosques to suburban locations."

I recall attending a conference in the Washington, D.C., area 15 or more years ago in which speakers were trying to give journalists an accurate picture of what American Islam looked like. At the time, Muslims were continuing to struggle with the aftermath of the 9/11 terrorist attacks, which was carried out by people claiming to follow Islam. The anti-Islam backlash was harsh and difficult to overcome.

Since then, American Muslims have continued to negotiate their way into American society in various ways, though their total number (somewhere in the 3 to 4 million range, meaning 0.9 percent of the population) makes them a only a small part of the total American religious landscape.

Yes, they still face Islamophobia. Yes, they are internally divided -- not just Sunni, Shi'a and Sufi but also immigrant-native born. But they are finding how to be both genuinely Muslim and genuinely American. Let's hope the upcoming commemoration of the 20th anniversary of the 9/11 attacks doesn't stir up additional hatred of American Muslims.

(By the way, if you haven't obtained a copy of my new 9/11-related book, Love, Loss and Endurance, I've just given you the Amazon link. If you want an autographed copy, email me at wtammeus@gmail.com and we can work that out.)

(The photo here today is one I took at the wedding of Muslim friends, Eyyup, center, and Merve, left, with one of their friends on the right, in January 2019 in a Kansas City area mosque.)

BUT WHAT IF GOD UNFRIENDS YOU?

Facebook is introducing a prayer tool, this RNS story reports. As is to be expected, the reaction to that news has been mixed. As for me, I'm going to continue refusing to start prayers this way: "Gracious and loving Mark. . ." I recommend you also refuse to do that.