Some modest surprises in the U.S. religious landscape

The membership decline in American Mainline Protestant churches began decades ago. As news these days, that story amounts to dog-bites-man. 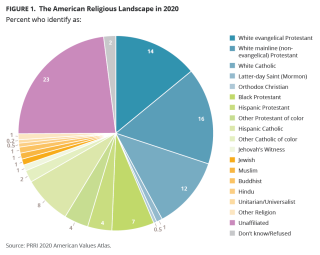 But wait. There's more: "(R)eligiously unaffiliated Americans, or 'nones' in religion demography parlance, have lost ground, making up just 23% of the country. The complex group — which includes atheists, agnostics and some people who say they pray daily but don’t claim a specific faith tradition — peaked at 25.5% of the population in 2018."

You may categorize these findings as a surprise. Or at least a bit of one. But tracking this kind of religious landscape information is complicated. For instance, don't miss the qualifier "white" in the second paragraph above, especially the one that comes before the word "evangelicals." If you look at the page to which I have linked you in this paragraph, you'll see that "Evangelical Protestants" still make up 25.4 percent of American Christians, compared with the 14.7 percent who are "Mainline Protestants."

Beyond that, there are different interpretations about who gets included in some of these categories, as this helpful RNS story notes: "Not unlike their evangelical step-cousins, Mainliners are in the middle of their own identity crisis — and who’s in and who’s out depends a bit on who is answering the question." (I usually include these denominations as Mainliners: The United Methodist Church, The Presbyterian Church (USA), the Evangelical Lutheran Church in America; the Christian Church (Disciples of Christ), the American Baptist Church, the United Church of Christ and the Episcopal Church. Sometimes the Quakers, the Reformed Church in America and the African Methodist Episcopal Church get included among the Mainliners.)

Still, the reality is that the religious ground in the U.S. continues to shift -- sometimes dramatically, sometimes not. And it's easy to think that what you knew 25 years ago -- a precipitous decline among Mainliners and a boom among Southern Baptists and other evangelical branches -- still holds. In fact, Southern Baptist churches in recent years have lost lots of members.

If you want to read the full Public Religious Research Institute's 2020 report from which the RNS stories stem, you'll find it here.

What we don't yet know (and no doubt won't for some years) is how the Covid pandemic has affected (and continues to affect) religious affiliation in the U.S. We all know, of course, that many congregations quit meeting in person and that only recently has that begun to change. (I wrote a bit about that change in this recent Flatland column.)

In the meantime, the question is whether any of this statistical stuff tells us much of anything about the difference religion is making in the lives of people. Probably not, but it's always good to be aware of your landscape.

(The image here today came from the Public Religion Research Institute's site, to which I've linked you above.)

IS THE BIBLE 'INERRANT?'

To add to the information above about America's religious landscape, here's a piece explaining the belief among some Christians that the Bible is "inerrant" in its "moral and spiritual teaching and record of historical facts.” Inerrancy has always seemed to me to be a dangerous and flimsy house of cards. To fall, all it requires is the smallest historical or other error. For instance: Who killed Goliath? David, right? It says so in I Samuel 17:50. But wait. In I Samuel 21:19 the killer is identified not as David but as Elhanan. Both answers can't be right, can they? In my branch of Christianity we say that you can take the Bible literally or you can take it seriously, but you can't do both. I vote for seriously.

P.S.: Because of the concern people of faith have about the environment, from time to time I write about ecological matters, such as this post in October 2018. A reader recently passed along what I think is a really good status report on various aspects of ecological degradation because of climate change/global warming. You can read it here. It was gathered from lots of sources by a private company, Tomorrow.io, which other companies use to help control how weather affects their businesses.

ANOTHER P.S.: In the spirit of respecting the humanity of all people (a religious idea) and not stereotyping particular people as all this or all that, I offer you this column about British people written by my childhood friend (we were in school together in India for a time when I was a boy) Markandey Katju, former justice on India's Supreme Court. Markandey is an avowed atheist but a deep respecter of each person's humanity. As we all should be.