No doubt it's a sign of something badly amiss in the business world that if you Google "examples of unethical business scandals" you get 515,000 results, including this one, which lists the 10 biggest corporate scandals. 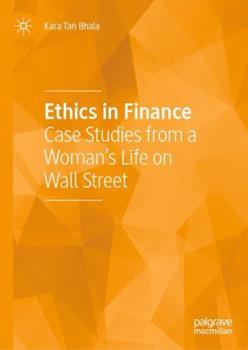 Remember the Enron scandal of 2001 in which the company was hiding billions of dollars in liabilities on its books to make it look as if it were profitable? As the website to which I linked you above reports, eventually Enron was "forced to file for what was then the biggest chapter-11 bankruptcy in history." (And now we've seen the Trump Organization and its top financial officer indicted for allegedly criminal business behavior.)

But, as we all know, the world of high (and even low) finance can be, and sometimes is, plagued by unethical behavior, often in a search for the god named profit. How and why does this happen? Well, part of the answer is that not enough emphasis is placed on financial ethics in business and professional schools.

Kara Tan Bhala, a wise woman (and now a Kansas Citian) I know who has decades of experience in this field, has published a new book that she hopes can fill in some of the gaps in knowledge about ethics in finance. It's called Ethics in Finance: Case Studies from a Woman's Life on Wall Street.

The terrific thing about the book is that it's full of true stories told in engaging ways. They are stories of ethical lapses and conundrums Bhala has encountered in her professional life along with her clear analysis of what went wrong and how, given employment of proper ethical standards, the wrong could have been avoided.

In this insider's look at the world of finance we find a wealthy married man asking a female subordinate to set him up with a prostitute in Asia. We read about how women in a big financial firm were systematically kept out of a special inner sanctum company Christmas party (within the regular company-wide party) just because they were women. We discover whistle-blowers who get fired for bringing unethical business behavior to unwanted light.

The stories are rich and detailed, mostly because Bhala lived them and took careful notes.

Bhala is head of and founder of the Seven Pillars Institute for Global Finance and Ethics, which describes itself as "an independent think tank for research, education and promotion of financial ethics. . .affiliated with the University of London – Queen Mary College."

She knows whereof she writes. And she knows the cost of not doing things ethically. For instance, she refers to the 2008
Global Financial Crisis, calling it "a catastrophic event triggered by greed, regulatory capture, excessive compensation and a whole lot of bad ethics in financial services."

Let's not relive that, please.

In each case that she writes about, she identifies the core ethical issue at play and then analyzes it from various perspectives to find out what went wrong and what should have been done to avoid ethical lapses, some of which turn out to be quite costly to the companies involved.

Early in the book she acknowledges widespread skepticism about whether there even can be ethics in business: "When I inform people I run a not-for-profit think tank that does research, education and promotion of financial ethics, invariably the first skeptical response is, 'Isn’t financial ethics an oxymoron?' After a weary answer of 'No, it’s not an oxymoron, it’s a necessity for the long-term proper functioning of finance and society,' the next question usually goes, 'But you can’t teach ethics, can you?' That’s when I get slightly more aggressive and say, 'Well, should I have allowed my daughter to grow up
feral then?'”

Bhala is determined to push the idea that ethics in finance and business not only is possible, it's absolutely necessary.

In many ways I wish this commitment to ethical standards were more evident not just in economic matters but in all matters, including academics, sports (you know, quit using foreign substances on baseballs), the arts, religion, journalism and other fields.

People from all of those areas and more could benefit by following Bhala's engaging stories and adopting the ethical standards she describes being broken again and again. The result could be that we might trust one another more. What a concept.

NCR PUTS ITS MONEY WHERE ITS MOUTH IS

Speaking of operating a business ethically, cheers for The National Catholic Reporter, for which I used to write a regular column, for divesting from investments in fossil fuels. NCR's board took its time and tried to make sure it was aligning its values with the way it invests its $12.7-million endowment. If environmental degradation is a major issue facing the world -- and I list it at or near the top -- then people of faith should be responding to the crisis in helpful ways. The board of NCR, which is based in Kansas City, has shown one way to do that.

P.S.: My friend Markandey Katju, a former judge on India's Supreme Court, has written this piece about Afghanistan and the dire consequences if the Taliban and its radical approach to Islam again dominates that beleaguered nation. He writes: "The first thing they will do on assuming power will be to impose a Wahhabi-type bigoted version of Islam in the country. Women will be compelled to wear the burqa, and not permitted to leave their house without a male relative." Sigh.