Home Archives Profile
Can a hopeful pope fix the wounded planet?
Is access to religious power in Israel about to change?

What to do about racism? Here are some answers

Early in 2019, I reviewed an excellent book by Jemar Tisbey, The Color of Compromise: The Truth About the American Church's Complicity in Racism. You can read that review here. 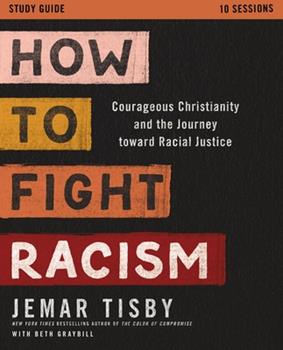 Tisbey,  president of "The Witness: A Black Christian Collective," has a new follow-up book out that I've only read about, not read. But I have read this good interview with him in Christianity Today. And I invite you to give it a read, too, as an introduction to his book, How to Fight Racism: Courageous Christianity and the Journey Toward Racial Justice.

As I grasped his message in the first book -- and the message in the second book seems consistent with that -- it is not that American Christians (white, Black or other) should spend all their time bemoaning the often-racist history of the church. Rather, they should learn about that history, figure out what went wrong and then commit themselves not to repeat that history. And not just not repeat it but, rather, redeem it by creating a racially just church today, the kind that would make Jesus happy.

The new book, Tisbey says, "comes from the urgency that I felt about the need to take antiracist action."

(A few months ago I wrote this Flatland column about what my own [predominantly white] congregation is doing on that front. Perhaps our experience can be useful to you and your congregation, if any.)

Tisbey added this: "But the second impetus was that whenever I speak or teach about racism, the most frequent question I get is 'What do we do?' I love this question because it shows that people are seeing that racism isn’t just a past question but a present one, and it also shows that they want to be part of the solution."

Exactly the point. We can't change the past, but we can understand it. We can, however, change the future so that it reflects values that can undercut racist systems and help this country live up to some of it aspirational language in its founding documents.

There's a big role in this for people of faith because all the great world religions call on their followers to treat other people, regardless of skin color or anything else, as beloved children of God. The existence of racism in the first place is strong evidence that people of faith have failed at that task.

In the interview with Christianity Today, Tisbey makes something like that same point, but perhaps more subtly: "From a theological perspective, Christians understand that all reconciliation is relational, and this is the reason for the incarnation: God becoming human to reconcile humankind to God. But even from a sociological perspective, all reconciliation runs through relationships."

Tisbey puts it this way: "different groups — white people and Black people — approach the text with different priorities. And if you’ve only ever been exposed to one group’s priorities with respect to Scripture, then it becomes easy to see how another group’s priorities could be perceived as wrong or inferior or “politicized.” So, we need to study theology and to read Scripture in community, so that we are approaching the text in a broad manner that helps us see truths not available to us before."

I see in some places a growing momentum to address all this in an effective way, even as some segments of the population want to continue to deny there's a problem. (One of the issues in that regard is that Fox News has recently doubled down on being an unhelpful leader in the culture wars and has helped to make the up-to-now obscure academic approach to studying racism known as Critical Race Theory a major target, as Margaret Sullivan recently pointed out in this Washington Post column.) At any rate, let's hope solutions-oriented people win that tug-of-war.

Here's a sad story about former Kansas City Royals infielder Ben Zobrist. He has sued his former pastor because of an affair that pastor had with Zobrist's former wife. I can't possibly know all the details of this case, but from personal experience I know that it's devastating when your own pastor has an affair with your wife. That's why we were divorced. We need more effective screening techniques to prevent people who are morally unfit for the ministry from being ordained. That's probably a pipedream in the sense that all of us are in some sense morally unfit, but there should be a special standard for clergy.

P.S.: The latest issue of a terrific magazine, Christian History, focuses on Christianity's role in higher education. You can read the whole issue here. On the page to which I've linked you, you'll also find a way to subscribe. That's free, though donations are encouraged.