Home Archives Profile
Suppose we find intelligent life elsewhere in the cosmos
What to do about racism? Here are some answers

Can a hopeful pope fix the wounded planet?

The question humanity must answer -- and soon -- is whether we are so far into the environmental degradation (much if not most of it caused by humanity) that global disaster cannot now be avoided. 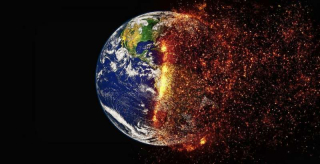 In her new book, Facing Apocalypse, which I wrote about recently here, Catherine Keller suggests things have spun out of our control ecologically:

"Climate science has. . .shifted emphasis from mitigation to adaptation -- a polite way of saying that the Holocene Earth, the world as we have known it for ten thousand years of so-called 'civilization,' can no longer be saved. Hope melted in the meantime away from even the modest Paris Climate Agreement to keep the average global temperature rise beneath 2 degrees centigrade. Then we learn that no, 1.5 is the limit for avoiding catastrophe. We have recently reached the point of the 1 degree C rise above preindustrial temperatures, warmest in ten thousand years. Hear the trumpets?"

Nor, she writes, does it help that "at this point in our history, approximately half of the trees of the earth are gone, lost to flames and deforestations, infestations and droughts, on an overheating planet."

Into this disheartening mess steps a man whose job it is to point us toward hope.

Pope Francis in 2015 released an encyclical called "Laudato Si'." In effect, it was a Vatican manifesto committing the church to working on salvaging what the document calls "our common home," the Earth. The odds are that even six years ago it was too little and too late, but that hasn't prevented Francis from continuing to work on behalf of its Earth-saving ideas.

And now the Vatican is releasing what it's called the "Laudato Si' Action Platform," to move from worrying words into hopeful action. The platform's official launch date is in October, but why wait?

The time to let the horse out of the barn, of course, is before the barn catches fire. And yet perhaps the pope's efforts at least can convince people to make changes that will make catastrophic changes in the environment a little less disastrous. That's our hope.

As the National Catholic Reporter story to which I've linked you notes, "The Laudato Si' Action Platform is an effort to move the global church to sustainability by inviting all types of church institutions to embark on seven-year, action-oriented journeys to combat climate change and address environmental issues."

Of course, this should have started not seven years ago but at least 70, when it already was becoming clear what too-loosely regulated industrialization was doing to the planet. I regret my own contributions to the problem, but regret isn't enough. Maybe the pope's encyclical and the ensuing action -- as well as reactions from other groups and institutions that recognize the size of the problem -- will help. I just wish I were more sure that the damage to our common home isn't largely irreparable by now. I hope I'm wrong and that the trumpets I'm hearing are not just notes of warning but notes of commitment to succeed.

IS JUNETEENTH OUR NEW INDEPENDENCE DAY?

A year ago, before Juneteenth became a federal holiday, Christianity Today published this opinion article describing why it's a more suitable celebration of American independence than the Fourth of July. As you read it, pay close attention to the voice of a black Republican -- Frederick Douglass, who is quoted at some length at the start of the piece. The words in our nation's founding documents about everyone being created equal were, when written, and remain today aspirational, not a description of reality. So we still have work to do. And yet all Americans can celebrate Juneteenth with a renewed commitment to making those founding words reality.

P.S.: My latest Flatland column is about the newly opened exhibit at Union Station in Kansas City: "Auschwitz: Not Long Ago, Not Far Away." But beyond that, I guide you to this excellent Flatland article by my former Kansas City Star colleague Brian Burns, who writes about Harry Truman's various connections and responses to the Holocaust as a U.S. senator and then as president.