Working against what the pope calls 'ideologies'

Christian churches around the world celebrated Pentecost last Sunday, May 23. The day, 50 days after Easter, often is called the "birthday of the church." 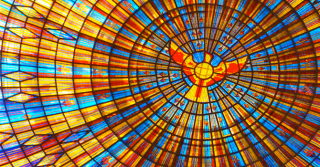 It's a simplistic label, given that it took as long as 100 years or longer in some places for what became Christianity to separate itself decisively from its root religion, Judaism.

The story of Pentecost is found in the New Testament book of Acts. That story says that on that day in Jerusalem followers of the resurrected Christ experienced the presence of God in a special way -- as the Holy Spirit, one of the three persons of the Holy Trinity.

In many Mainline churches (like the Presbyterian denomination to which my congregation belongs), the Holy Spirit doesn't get a lot of attention, though in such branches of Christianity as Pentecostalism, the Holy Spirit nearly always takes center stage.

Pope Francis spoke about the Holy Spirit (sometimes known as the Holy Ghost) when he addressed a Mass on Pentecost at the Vatican.

The Holy Spirit, he said, “impels us to unity, to harmony, to the harmony of diversity. He makes us see ourselves as parts of the same body, brothers and sisters of one another.” Then he added something that people in our polarized world need to hear: "Say no to ideologies, yes to the whole.”

Ideologies, as I understand the pope's use of the term, means narrow, even extremist, thinking. And we're seeing the disastrous and violent results of such thinking across the globe. We saw it in the 9/11 terrorist attacks. We saw it in the neo-Nazi who murdered three people in Kansas City in 2014. We saw it in synagogue and church shootings in recent years. And more.

My new book tells the story of the murder of my nephew on 9/11, but it goes beyond that to explore the question of how people get seduced into such monochromatic thinking and what, if anything, we can do about it. The last chapter of Love, Loss and Endurance: A 9/11 Story of Resilience and Hope in an Age of Anxiety, proposes a handful of strategies that we can use to unplug extremism.

One of those strategies focuses on the importance of being religiously literate -- not just about our own faith tradition, if any, but also about other religions. The idea is that if we really know in some detail what others believe and how they act out those beliefs we won't be tempted to dismiss someone else's religion as a satanic tool that needs to be eliminated.

Ignorance produces fear, which can produce bigotry and violence. And all that is unnecessary.

In terms of Christian theology, as Pope Francis said, a relationship with the Holy Spirit should help us “embody the comfort" that the Spirit brings to us so we can bring it to others.

And if you're doing your best to comfort people, one of the results is that you're not planning their demise through violent, terroristic means. Pretty simple. Pretty hard. Pretty necessary.

(The Pentecost image above came from this site.)

In the year (2019) before the pandemic, more American Protestant churches closed than new ones opened, a new study shows. Probably that trend got worse in 2020, but without the data, that's just a guess. I think that what's being rejected here isn't religion in general or spirituality but, rather, institutional religion. Combine sexual scandals with financial scandals with theology that's so rigid it oppresses humans or so squishy that it doesn't stand for anything and people eventually will walk away from it. But at least this trend keeps scholars and surveyors employed trying to figure out why.

P.S.: My latest Flatland column -- about the upcoming Auschwitz exhibit at Union Station in Kansas City -- now is online here.