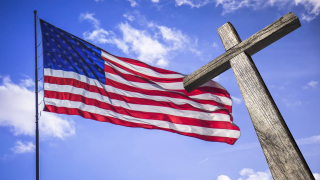 People who disagree with that stance, in a sense, can take a hike, the nationalists believe. In the view of Christian nationalists, their version of Christianity should set the tone for society and establish the political goals of the entire nation.

But perhaps it will help to get a more detailed picture of what a Christian nationalist looks like and how he or she operates. So let's do that today by digesting this New Yorker article by Pulitzer-prize-winning journalist Eliza Griswold, who writes about Doug Mastriano, a Republican state senator from Gettysburg, Pa.

Why focus on him? Well, as Griswold writes, "in the past year, he has led rallies against mask mandates and other public-health protocols, which he has characterized as 'the governor’s autocratic control over our lives.' He has become a leader of the Stop the Steal campaign, and claims that he spoke to Donald Trump at least fifteen times between the 2020 election and the insurrection at the Capitol, on January 6th.

"He urged his followers to attend the rally at the Capitol that led to the riots, saying, 'I’m really praying that God will pour His Spirit upon Washington, D.C., like we’ve never seen before.' Throughout this time, he has cast the fight against both lockdowns and Trump’s electoral loss as a religious battle against the forces of evil. He has come to embody a set of beliefs characterized as Christian nationalism, which center on the idea that God intended America to be a Christian nation, and which, when mingled with conspiracy theory and white nationalism, helped to fuel the insurrection."

It should not surprise you, given all that, that bills "that Mastriano supported in the legislature would have mandated teaching the Bible in public schools and would have made it legal for adoption agencies to discriminate against same-sex couples, among other things," as the New Yorker story notes.

Nor should it surprise you that Mastriano has been promoting the idea that Muslims want to take over America and institute Shari'a law in place of the U.S. Constitution and that he has been repeating what's now being regularly and accurately called the "Big Lie" that Donald J. Trump won the 2020 presidential election. Indeed, Mastriano used campaign money to pay for half a dozen bus loads of pro-Trump supporters to come to Washington, D.C., on Jan. 6, the day of the insurrection at the nation's Capitol.

The New Yorker story is long and detailed, but it should give you a better sense of what Christian nationalism is all about. If you identify as a Christian and you object to the notion that this movement and stance is in any meaningful way Christian, then it's your job to speak out against Christian nationalism and do what you can to oppose it. Silence amounts to complicity.

(The image here today came from this site, which contains a useful United Methodist Church essay on Christian nationalism.)

HOW BIDEN CAN RESPOND TO THE PRIEST ABUSE SCANDAL

David Clohessy, former national director of SNAP (the Survivors Network of those Abused by Priests), has written this interesting RNS opinion piece saying it's time for Joe Biden, America's second Catholic president, to speak out and take action on behalf of victims abused by priests and protected by some bishops. Clohessy, whom I know, writes this: "In just a few weeks, Biden has shown both genuine compassion and impressive energy in addressing a myriad of serious problems. It’s time he do so with the most serious problem in his own church." And he offers a list of things Biden could do and say.